A Friday protest in response to George Floyd's death led to fires, looting, vandalism and a shooting, according to Portland police. 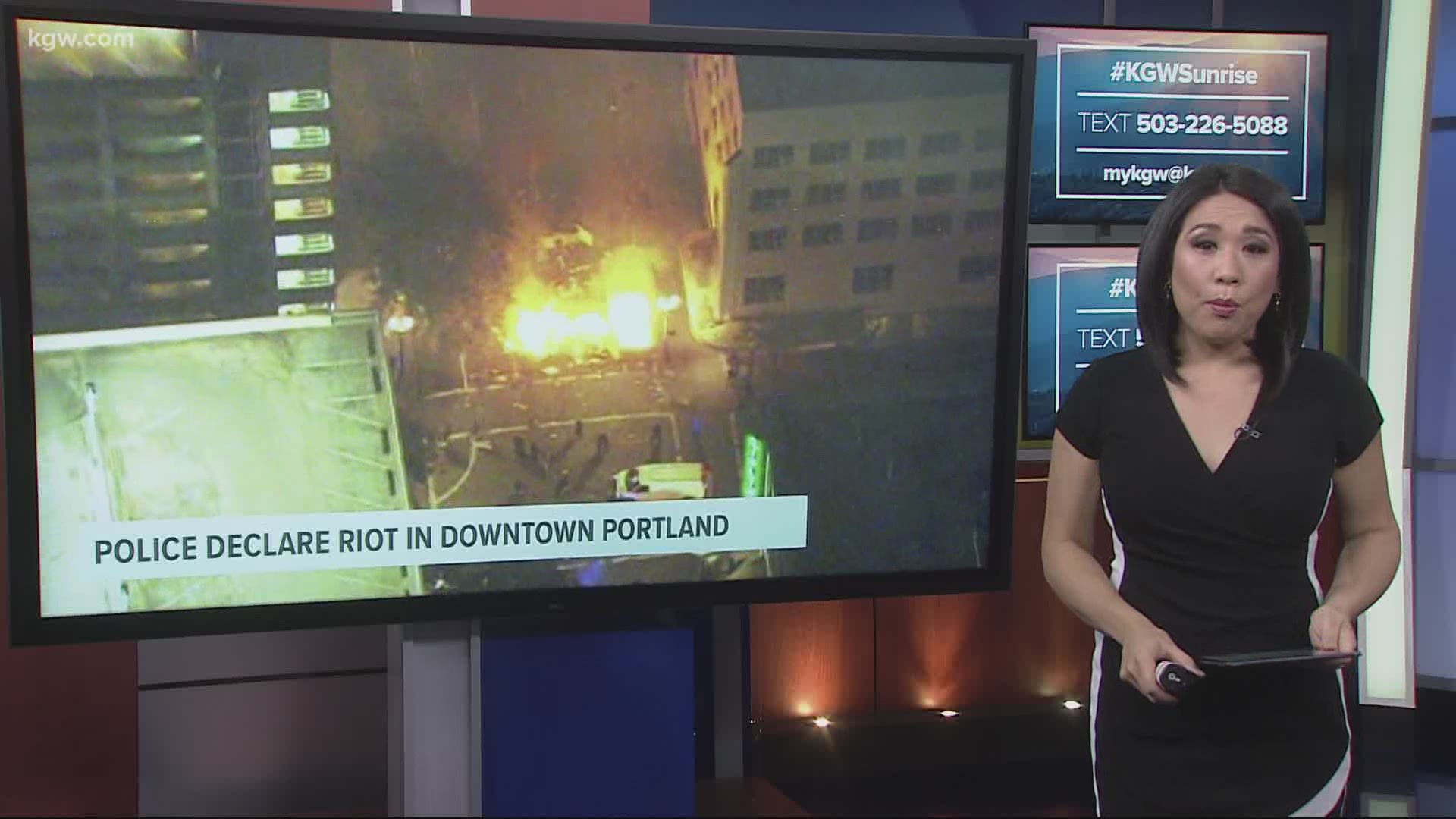 PORTLAND, Ore. — Portland joined cities across the country where unrest and riots have occurred in the fallout from the death of George Floyd, a black man who died while in a Minneapolis police officer's custody. A march through the streets of Portland in protest of Floyd's death turned into a riot late Friday night and into the early morning hours of Saturday.

The evening started with a vigil at North Portland's Peninsula Park, where hundreds of people gathered to honor Floyd, and other black men and women killed by police officers nationwide.

The group began marching around 9 p.m. down Martin Luther King, Jr. Boulevard, chanting: "black lives matter," "no justice, no peace," and "I can't breathe," in reference to Floyd's plead while a Minneapolis police officer knelt on his throat.

Some individuals broke from the group and vandalized businesses along MLK Boulevard, leaving broken glass and graffiti. Police say graffiti went on for about 20 blocks.

Just before 10 p.m. police say a protester shot at an occupied car at NE 7th Avenue and Morris Street. One person inside the car was treated for a graze wound, and has since been released from the hospital.

The march eventually got to downtown, where demonstrators broke into and set fire inside the Multnomah County Justice Center, which houses hundreds of inmates.

Several fires were set throughout downtown, in dumpsters, trash cans, cars and pallets at SW 4th Avenue and Alder Street.

Businesses throughout downtown were vandalized and looted -- including stores at Pioneer Place Mall -- and the demonstration was quickly deemed a riot. Police used tear gas, flashbangs, and other uses of force to try to disperse people.

At SW 4th Avenue and Yamhill Street, Portland police say their cars were smashed by protesters armed with electric scooters.

Two officers were injured during the riots; one was hit by an "incendiary device" and a Portland Police Criminalist was hit in the head with a rock. Both are expected to be OK.

Police closed the area to traffic and allowed the driver to back out of the crowd, but they refused. They were arrested and issued a criminal citation.

Early Saturday morning, Portland Mayor Ted Wheeler pleaded with demonstrators to end the destruction. As he saw the vandalism continue, Wheeler, who was out of town caring for his sick mother, returned to Portland and held a news conference Saturday morning alongside other city leaders.

"I cannot condone last night's violence, I can't stand by and watch our city be destroyed, buildings set aflame. I won't. But nor will I stand silent as men like George Floyd are murdered by the very institutions that are supposed to protect and serve them," Wheeler said.

As of 5 a.m. Saturday, 13 people were arrested overnight in connection with the riot:

Mayor Wheeler issued a state of emergency early Saturday, and then imposed a citywide curfew, effective from 8 p.m. Saturday to 6 a.m. Sunday, banning any non-essential public travel or gathering in any public places.

TriMet said buses and MAX trains will run Saturday night for those who must take essential trips, but service may end quickly if downtown Portland or another part of the city becomes unsafe.

The Oregonian reports a protester was struck by a driver at Northeast Grand Boulevard Avenue and Shaver Street.

Organizers asked attendees to wear masks to help prevent the spread of COVID-19. Hundreds of people, spread out across the park, showed up to honor Floyd. 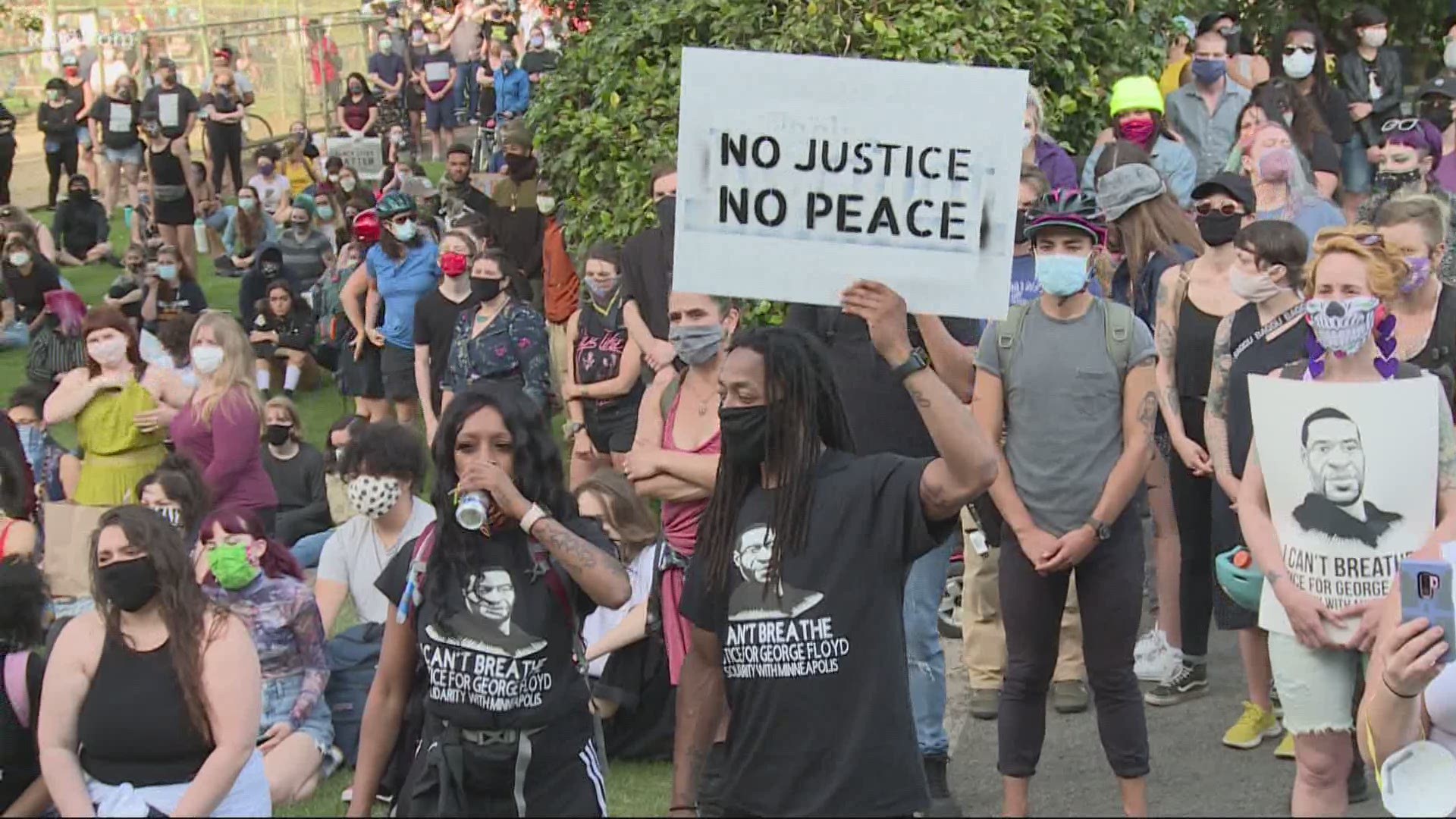 WATCH: Hundreds gather in Portland for vigil in response to George Floyd's death

The vigil was filled with about three hours of speakers.

“We stand with the grieving family of George,” said Rev. Roy Tate of Christ Memorial Community Church while addressing the crowd. “Those who are in Minneapolis, we stand tonight with them.”

“I know what happened in Minneapolis, but we have our own situations here in Portland,” said pastor Dwight Minniweather of New Liberation Christian Church. “They’re not as crucial but they still need to be addressed.”

Earlier on Friday, the NAACP led a peaceful gathering in the afternoon called "A Eulogy from Black America."

On Friday, authorities announced that former Minneapolis police officer Derek Chauvin has been arrested in connection with Floyd's death. Chauvin is charged with third-degree murder, but authorities are continuing to review evidence and there may be further charges later.

Many in attendance at Friday night's vigil said they appreciated news of Chauvin’s arrest, but only to a degree.

“We've seen it over and over again,” said Lauren Goche. “Officers can even be arrested and they just get acquitted.”