Demonstrators were marching in Portland for the second straight night after Daunte Wright was killed by police. 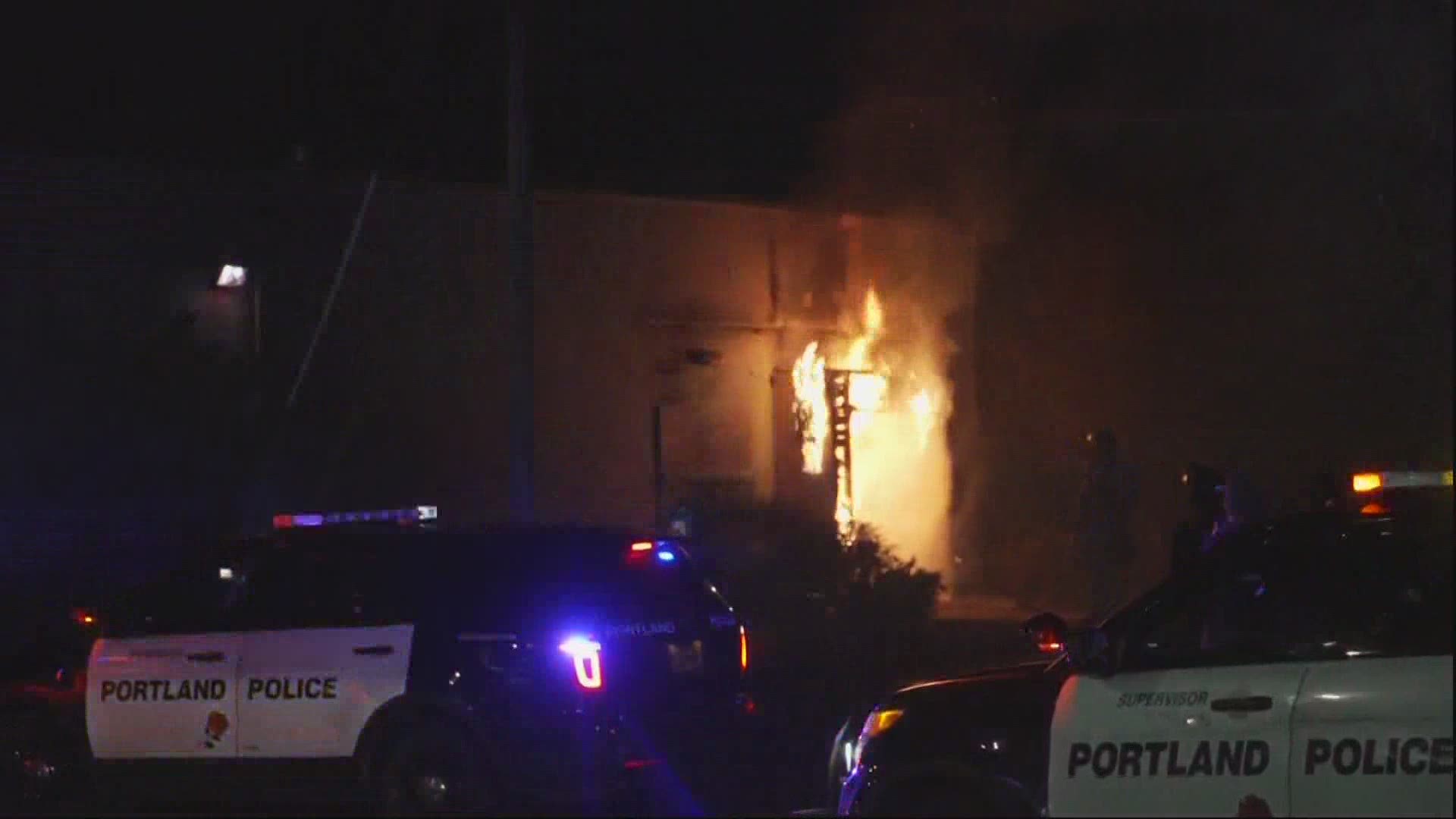 PORTLAND, Ore. — At least one person in a crowd of demonstrators set fire to a door at the Portland Police Association (PPA) building Tuesday night, prompting police to declare a riot for the second night in a row. Police made one arrest.

The march marked the second night of protests in Portland after the killing of Daunte Wright, a 20-year-old Black man who was shot by police in Brooklyn Center, Minnesota on Sunday.

People started gathering at Kenton Park in North Portland at about 9 p.m. for a planned demonstration. At about 9:40 p.m., the group marched south from the park to the police union building a few blocks away on North Lombard Street and Campbell Avenue.

At 9:52 p.m., police said a crowd of 100 people was blocking Lombard near the PPA building. Police began using a loudspeaker to tell the crowd to leave or risk arrest, citation or crowd control agents, including tear gas and munitions.

Around 10 p.m., police confirmed the building was set on fire. Police said in a news release that someone in the crowd used an accelerant on the wooden framing around a door of the building and lit it on fire. Video from independent journalist Suzette Smith also shows fireworks going off outside.

"People appear to be using accelerants on a door to ignite a fire which is growing larger," Portland police tweeted at 10:05 p.m.

A neighbor tries to put out the fire using a garden house on the Portland police Association building pic.twitter.com/chUcwaKWRZ

By 10:07 p.m., police declared a riot and cleared people from the building as Portland Fire & Rescue extinguished a second fire. The fire was put out by 10:16 p.m. and the demonstrators returned to Kenton Park to disperse, police said.

Portland police said the fire caused an estimated $25,000 in damage to the building.

"I don't consider these protests. We're talking about direct action events that are being billed as such and these are criminal events," Portland Police Bureau Capt. Tina Jones told media.

A probable cause (PC) affidavit filed in Multnomah County court Wednesday, April 14, says a deputy with the DA's office stated they had reviewed police reports which have been filed and added in the case against Raven-Guido.

The court documents go on to state on April 13, information obtained from an informant told Portland police that Raven-Guido was one of the people responsible for starting the fire at the PPA building. The informant told police Raven-Guido was present when the second large fire began and provided a detailed description of her actions related to the fire.

Police arrested Raven-Guido and searched her backpack, where they found multiple lighters and three plastic bottles that appeared to contain an accelerant. One of the bottles also appeared melted, the PC affidavit states.

The informant told police she saw Raven-Guido pour a flammable liquid on the fire, causing it to grow, then one of the bottles caught on fire and began melting. After, Raven-Guido was seen putting all three bottles into her backpack. This information was reported to police and Raven-Guido was promptly arrested. Several photos in the PC affidavit show the bottles and other evidence, including several lighters, collected from Raven-Guido's backpack at the time of her arrest.

Police said Raven-Guido declined to be interviewed by officers.

In the court docs, police also said the informant has "no criminal convictions, has a history of providing credible and reliable information on multiple prior investigations and that the informant personally observed the actions of the defendant."

Police said she also had a crowbar, spray paint and heavy marker, all of which were placed in evidence.

Raven-Guido had also been arrested on Aug. 25, 2020, during a declared riot outside Portland City Hall for interfering with a peace officer, second-degree disorderly conduct and resisting arrest. All three charges were later dropped. But this week, she was newly charged with a felony riot in connection to that incident.

While no one was inside the building when the riot happened, neighbors were home just yards away.

People who've lived in the neighborhood for decades say they're fed up after the street they call home has become ground zero for late-night destruction over the past year.

"I've become numb," neighbor Patrick Armstrong said. "When they're trying to say they're supporting Black Lives Matter and anti-police brutality, by coming and starting fires in a neighborhood where you've got little kids, special needs people, long-time residents. How is that helping our community?"

"The systems need to change, they have to change," Marta Guembes added, "But I do not believe that by doing this type of act we're going to change things."

Guembes helped a neighbor put out flames in the first fire set to the police union building.

"You don't think twice. This is about our neighbors, our lives," she said.

"I support nonviolent demonstrations, calls for racial justice, equity and common sense police reform. But the minute one crosses the line and engages in criminal destruction, arson and violence that is no longer a peaceful protest. That is criminal activity and it is unacceptable," Mayor Wheeler said.

Neighbors say the destruction won't stop until people behind it are held accountable.

"One arrest? I don’t understand that!" Guembes said. "What's going to be next if they're not being accountable of what they're doing? This is harming our community, our beautiful city that is not beautiful like it used to [be]."

KGW reached out to DA Schmidt's office Wednesday, but they declined an interview.

If anyone has information about other people who were involved in the arson, they're asked to contact Det. Meredith Hopper at 503-823-3408 or meredith.hopper@portlandoregon.gov.

On Monday night, police declared a riot after they said a crowd of people broke windows, threw rocks and other projectiles at police and lit a dumpster fire outside the Penumbra Kelly building on East Burnside Street. The building houses offices for the Multnomah County Sheriff's Office and Portland Police Bureau.

Police are planning for more direct action demonstrations in the coming days.

Portland saw over 100 nights of protests following the death of George Floyd on Memorial Day. Demonstrators have rallied around issues that include police brutality, racial inequity and the abolition of police.

Kayla Heffner contributed to this report.