Ota Tofu in Southeast Portland has a loyal following among Asian communities. After recent exposure on Top Chef, the company is looking to expand. 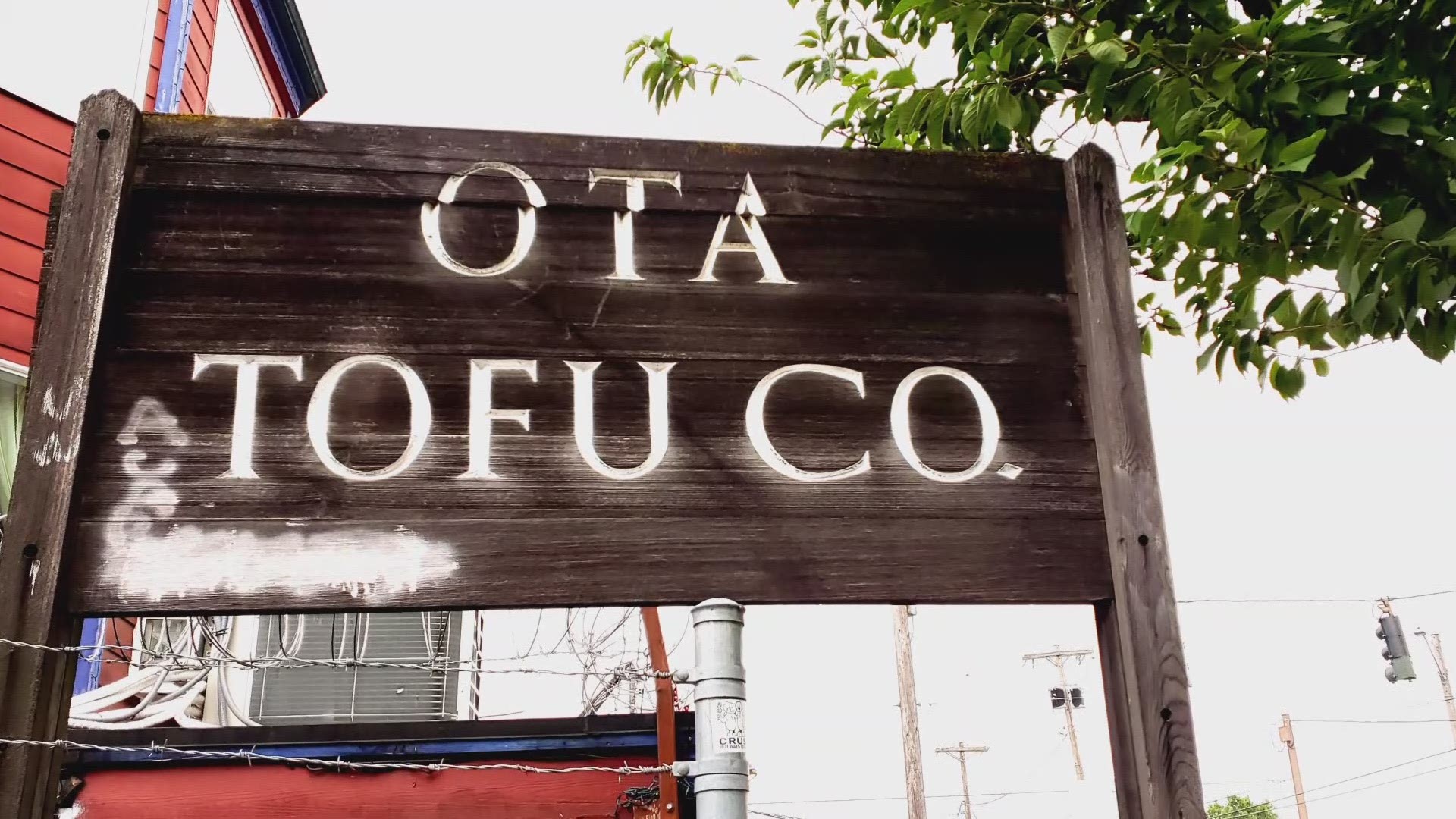 PORTLAND, Oregon — One of the strongest connections Oregon has to Japan is through tofu. Portland is home to America's oldest still-operating tofu manufacturer, Ota Tofu.

The company celebrates its 110th anniversary this year. It's easy to miss the faded wooden sign and nondescript entrance on Southeast Stark and Sandy, but regulars know this place well.

On a red tray atop a bucket, co-owner Sharon Ogata sets fresh tofu for a stream of walk-in customers to their small lobby. Other requests from area temples are large enough for full bags to be carried out to waiting cars.

Ota Tofu has a loyal following for a reason. Saizo Ota started the company in 1911 to serve the many Japanese immigrants living and working in Portland. He made it the traditional way: stirring and pressing the beans by hand. The recipe contained only three ingredients: soybeans, water and the Japanese coagulant nigari, or magnesium chloride, that turns soymilk into curds.

When Ota, his family and 120,000 other Japanese Americans were ordered to an Idaho internment camp during World War II in the 1940s, he locked the door of Ota Tofu, not knowing what would happen. He died at the internment camp, never seeing the shop again.

After the war, his wife returned to Portland and re-launched the business. It was that culinary connection of something tasting just like home, for a Japanese community scarred by racism and cultural fear.

"I do feel the pressure of keeping this legacy going right, producing a product that is up to their standards," said Jason Ogata, Ota Tofu's owner since 2019.

Ogata throws on his apron and rubber boots at 2:30 a.m. six days a week. He grew up in Portland, played baseball for Oregon State and was drafted to the Texas Rangers before getting his MBA and working a corporate job on the east coast. His mother Sharon, an optometrist, bought this tofu for years, before the matriarch of the Ota family confided she was ready to retire but didn't want the business to end with her.

RELATED: From wheat to semiconductors, the love is mutual between Japan and the Northwest when it comes to trade

Sharon convinced son Jason to move his family back home to Portland and run Ota together.

"I knew that being a business owner is a lot of work," laughed Jason. "But I didn't know it was this much work!"

Ogata is in the facility cooking and straining the ground soybeans right along with his staff.

"A lot of the tofu manufacturers now, they just use a machine and it just runs and they mass produce tofu. We can't keep up with that. How we do it and why we do it is because we think it makes better tofu," explained Ogata.

Credit: KGW
Ota Tofu packages made fresh that day, get ready to be shipped out from their production facility in S.E. Portland.

Never in a million years would he change the name to match his own, Ogata said — there's too much history and homage to pay to the founders 110 years ago. But so much has changed. Portland is a food mecca. Healthy eating, veganism, and melding food cultures have inspired chefs to use Ota Tofu on pizza, and in Mexican or even Italian cuisine.

The company also got national exposure recently thanks to Top Chef Portland on Bravo. Ota Tofu was featured for an entire episode of one of television's biggest chef competition shows. Each contestant got a tour of the production facility and had to create a dish using soft, medium and firm tofu varieties from Ota for the judges to taste and critique.

"To be on a national stage like that, it's a dream come true for a small business owner," said Ogata.

Since its airing, website clicks and emails from all over the country have flooded in from restaurants and home cooks wanting to use Ota Tofu. But the authentic, handmade process Ogata vows never to stray from means they can't go faster than the 500 blocks of tofu they make per hour.

Somehow, he must scale bigger. Ogata has been looking at other commercial kitchen locations, but he hasn't found anything just right. His first choice would be to keep the same space the Ota family ultimately chose years ago.

"It's always something that I've dreamed of ever since taking over this. I see it in our future."