Wheeler, Iannarone square off on Portland protests, police reform and the pandemic during debate 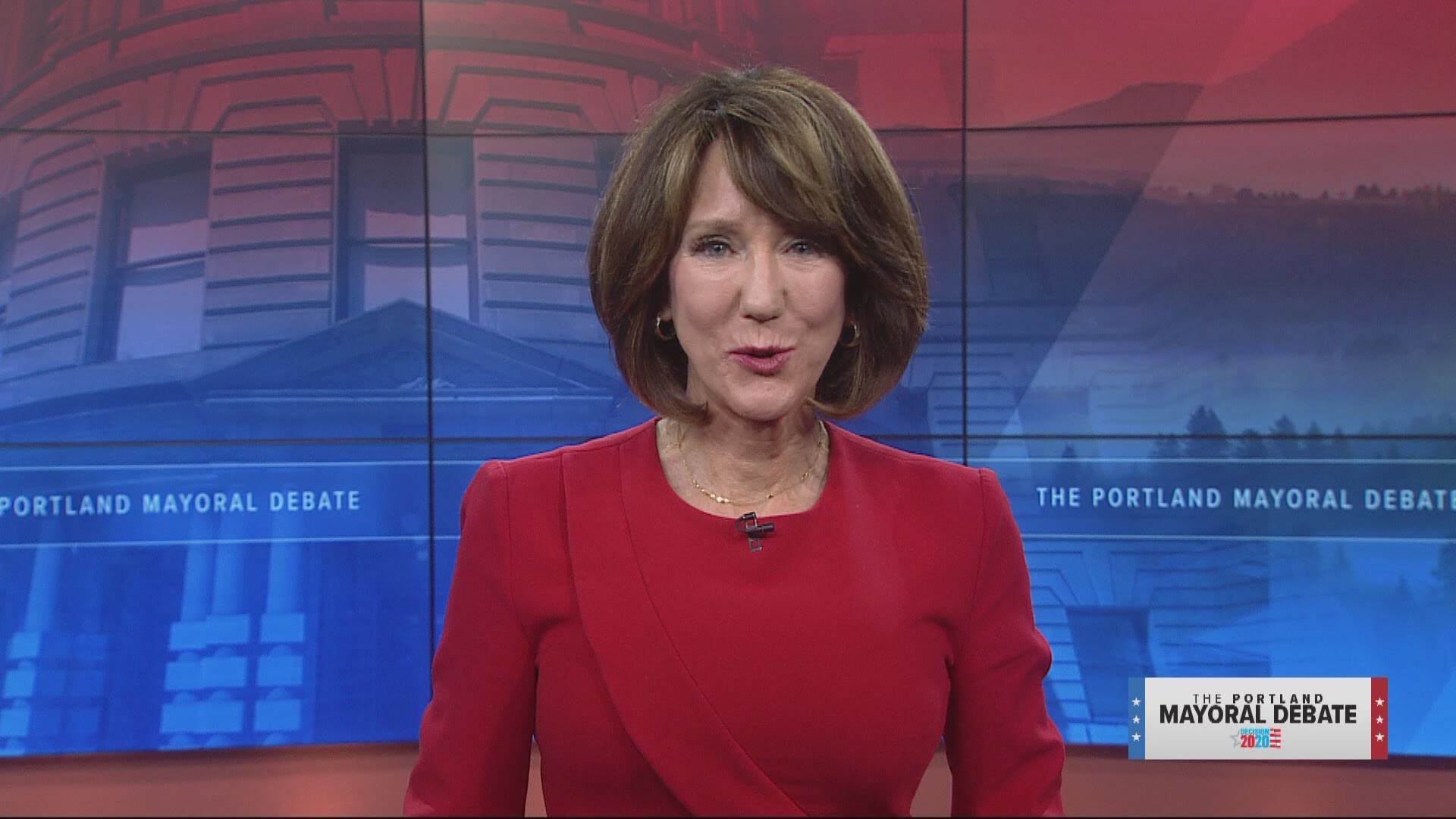 PORTLAND, Ore. — In a Portland mayoral debate hosted by KGW and the Oregonian, incumbent Ted Wheeler tried to make his case to voters to let him lead the city for four more years, while challenger Sarah Iannarone pushed for progressive policies and a fresh start in local government.

Both candidates appeared from remote locations to ensure the debate was as safe as possible. Wheeler was at the offices of the local firefighters union, while Iannarone appeared from the office of a supporter in Southeast Portland. We taped the debate in advance to minimize the risk of any technical difficulties that would distract from the messages from the candidates.

The debate was moderated by KGW's Laural Porter and the Oregonian's Everton Bailey, and the candidates discussed everything from nightly protests, climate change, to homelessness, the COVID-19 pandemic and economic recovery.

Wheeler has faced criticism over the past few months regarding police reform, protests downtown and how he's handling the homeless crisis.

When asked why voters should expect anything different in a second term, Wheeler admitted the critics have targeted him on homelessness and public safety.

"We have not done enough to get people off the streets and into some sort of environment where they could actually be helped to stay off the streets. We have a difference of opinion, but I'll keep working with my colleagues at the county to make some movement there," Wheeler said, referencing his statements last month when he threatened to pull out of the Joint Office of Homeless Services. "Around public safety, we've just built a coalition including the state police, the county sheriff, and the local Portland police chief and put together a coalition two weeks ago that was very successful. I'm bringing back some of those same partners this week to hammer out plans to keep our communities safe during the election."

Though she hasn't served in public office, Iannarone stressed her experience as a community organizer and leader, who would serve as a fresh start in the office.

Regarding more than 120 days of protests, Wheeler said that ultimately the violence and property damage needs to end for the city to move on and heal, but he offered no specifics on how he would end the protests.

"Nightly violence and criminal destruction will not be condoned. Those engaged in acts of violence, regardless of beliefs, should be held accountable. I get it from both sides," Wheeler said, when asked about the nickname "Tear Gas Ted" that protesters have given him. "Bottom line here is: You've got to draw the line carefully. We're going to support peaceful demonstrations ... but on the other hand, we have to do what we need to do for police to hold people accountable. That includes working with the district attorney as we have to hold those who are engaged in egregious acts of violence or vandalism accountable. It means we need to encourage the courts to work with us to not put into place restrictions that would impede our ability to hold people accountable."

Iannarone, on the other hand, stressed she would stand alongside, and work with, the leaders of the Black Lives Matter protests.

"Meeting with them, working with them on these issues and making progress towards real reform," she said. "I condemn violence in all forms. I always have. But we must know the answer to protests about police brutality cannot be increased police brutality."

Both candidates emphasized the need for police reform, and Wheeler several times mentioned a measure on November's ballot that would create a new police oversight board.

"I've encouraged the Portland Police Bureau to not see this moment of national reckoning and demands for police reform as a condemnation of the hard work they do, but see them as opportunity to lead that reform," Wheeler said. "They know better than anybody else what it takes to be a cop. They have a perspective on community safety as well. They need to be at table, their voices need to be respected alongside the myriad of other voices in the community. I need them engaged and pulled into the table, not pushed away."

In her response, Iannarone bluntly said, "I just don't know how Portlanders who've been watching this unfold for 120 days believe that this mayor is going to be able to affect the change he's promising. When you try to please everyone you end up alienating them, because he hasn't taken firm line to make sure the situation is controlled. So what we hear is, 'The protests are out of control. The police are out of control.' He doesn't present a clear plan to deal with any of this. I, prior to the tragic murder of George Floyd, presented a re-thinking public safety plan that would have dealt with all of these issues proactively."

When asked if she supports cutting $50 million from the police bureau's nearly $250 million in annual expenditures, Iannarone responded, "That $50 million didn't come from me. This is not me leading on this. This is a clear distinction between me and the incumbent. I don't come out with these ideas on my own and think the public needs to accept them. These are ideas put forward by our partners in the community that have been doing this work for decades."

Wheeler quickly fired back, saying Iannarone did not answer the question.

"The $50 million seems arbitrary for me. I want to deal with facts. I want to talk to people who know what they're talking about. Lets bring the community together and have these conversations, but lets make sure they're rational conversations," Wheeler said.

In recent weeks, Wheeler has been critical of the city and county Joint Office of Homeless Services, saying they are not doing enough to combat chronic homelessness. Latest estimates say there are about 2,000 people living unsheltered in Portland. When asked if he could pledge to an exact number of people he would help get off the streets, Wheeler said he couldn't give an exact number.

Iannarone again questioned Wheeler's ability to deal with a crisis after four years in office.

"This is why having a plan matters," she said. "I don't understand why a mayor in the fourth year of his administration doesn't have a plan to deal with what he sees as weaknesses in the Joint Office of Homeless Services, if this has been a priority for him since he ran in 2016, committing to end the crisis on our streets. This is why it's so important to ask policymakers for a road map to be held accountable."

The debate ended with both candidates asking each other questions.

Iannarone asked Wheeler why he thinks he's deserving of re-election if two-thirds of Portlanders disapprove of his job performance.

"When March rolled around, the city went into a state of pervasive crisis, COVID crisis, resulting economic shutdown, national reckoning on racial justice, people taking to the streets, some people engaging in acts of violence, forest fires on top of that," Wheeler said. "I don't mind telling you that distracted me from my ability to campaign. I didn't campaign. There was a lot of real anger, a lot of real frustration, a lot of real anxiety. As the mayor, the buck stops with me. I expect to be the recipient of that frustration and anxiety. But on the other hand, I should have taken the opportunity to campaign, but I chose instead to focus on the crises, and I don't mind lifting the tent a little bit to say I was dealing with personal crises too. My friend [former commissioner] Nick Fish died, my mom died, I was going through a divorce. Anybody who's gone through those knows that can be taxing, and it also took my eyes off the ball a little bit. I believe in myself and my administration."

Wheeler asked Iannarone what direct experience she has leading a city with a multi-billion dollar budget.

"That's a valid concern and I'm hearing it from other people too," she said. "I can understand why they might be concerned. I do bring serious, relevant qualifications at this time. My lived experience, my professional background, also the fact of who I listen to in the city and who I will bring together to lead us. It's not a single person who sets the city budget, it's a single person who sets the vision for what that budget should be, and what we need right now is visionary leadership with courage, a commitment to things like a Green New Deal, housing for all, re-thinking public safety, plans that are clear where we can actually work with the public to get things done. A lot of different skills than you brought when you ran for office. It's a clear choice for the public in operating styles, in experience and how they will run in the city based on our values and our vision."