Days after calling the police on a black guest talking on the phone in their lobby, a Portland hotel is apologizing. 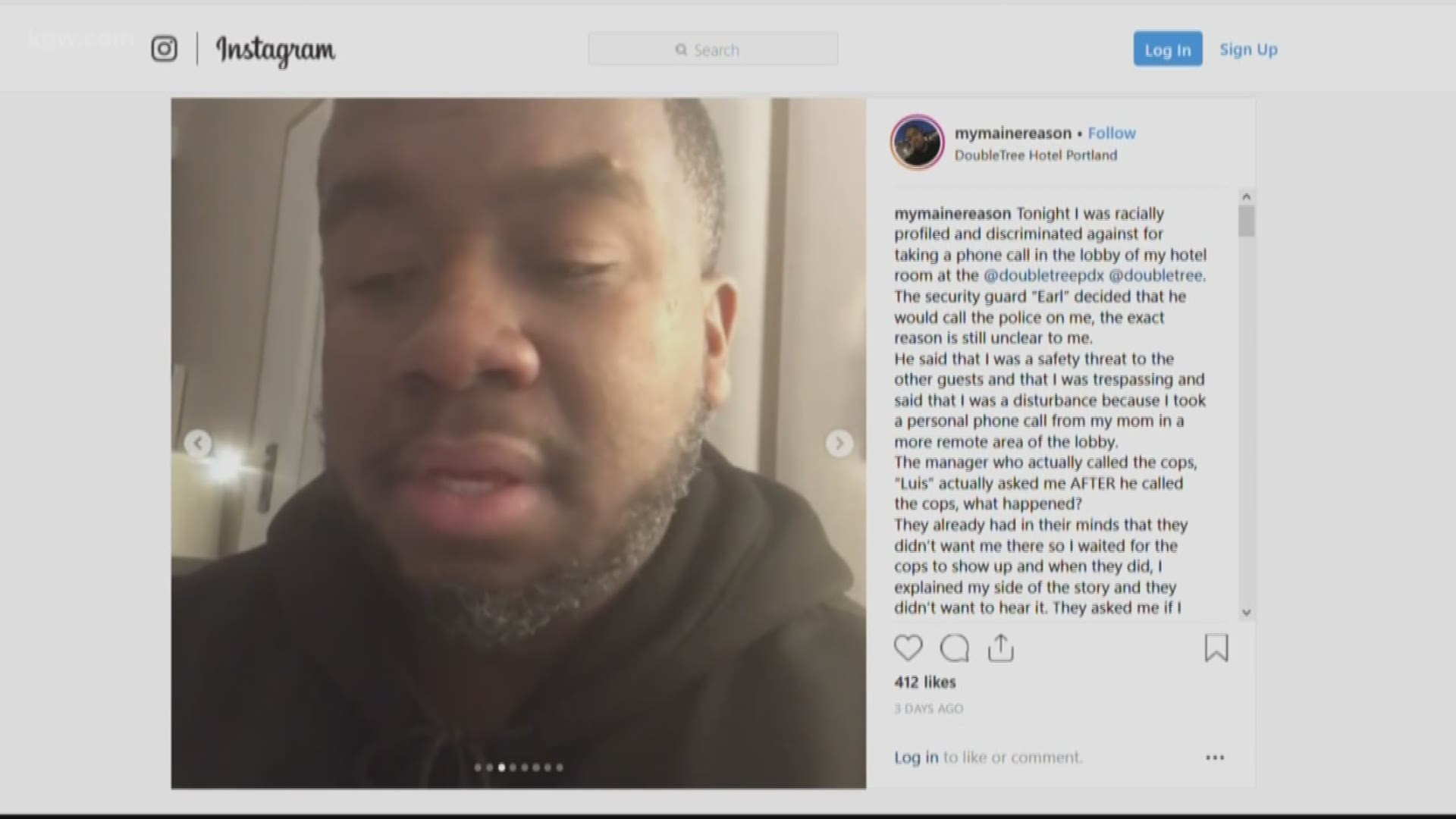 Days after calling the police on a black guest talking on the phone in their lobby, a Portland hotel is apologizing.

Jermaine Massey has said he will seek justice.

“From my point of view, it had to have been my race,” he said in an Instagram video.

Massey lives in Kent, Washington but was in Portland for the first time Sunday night to see Travis Scott perform at the Moda Center.

And he was staying at the DoubleTree hotel in the Lloyd district. Massey filmed part of the incident:

He said he was sitting in the lobby on the phone when a security guard called the police on him.

Massey said in his Instagram post that the guard called him a 'safety threat'. And accused him of trespassing. The Portland Police Bureau confirmed that they responded to the call.

Massey was not arrested or charged but was ordered to leave the hotel.

Later that night, from the Sheraton near Portland International Airport, he talked about the ordeal on Instagram.

“There were other patrons in the lobby at the time -- none of them were questioned about if they were staying there at the hotel or not, but I was…" said Massey in his post. "Judging someone based off of the color of their skin, you never know how it feels until you've actually been there, and that happened for me tonight. This isn't the first time, but this is a real incident where I could have went to jail had I responded a different way, because I was talking on the phone in the lobby."

Safety and security of our guests and associates is our top priority at the Doubletree by Hilton Portland. This unfortunate incident is likely the result of a misunderstanding between our hotel and guest. We are sorry that this matter ended the way it did. We are place of public accommodation and do not discriminate against any individuals or groups. We have reached out to the guest in order to resolve this matter.

I look forward to speaking with Mr. Massey today and resolving this issue directly with him.

On December 22, 2018, employees at the DoubleTree Lloyd Center, located at 1000 Northeast Multnomah Boulevard, requested officers respond to the location regarding a person who hotel staff were trespassing from the property.

The officer arrived at the location and contacted employees of the DoubleTree Lloyd Center. The employees, who had authority to trespass people from the hotel, requested the officer contact a person in the lobby they had reportedly directed to leave the property. The officer spoke with the man, who gathered his items and left the location.

Prior to the man departing from the location, the Portland Police Bureau Officer offered the man assistance to a new hotel and at that time the man declined the offer.

I was saddened by this whole experience. The gentleman who was profiled must have felt helpless. I am disappointed with both the DoubeTree and the police response. The priority should be to make this customer whole and to retrain DoubleTree and Portland Police staff to make sure such a situation never happens again.

Massey has not responded to requests for interviews