Michelle Sox's 3-year-old daughter, November, badly burned her hand after touching the inside of a baseboard heater in her bedroom. 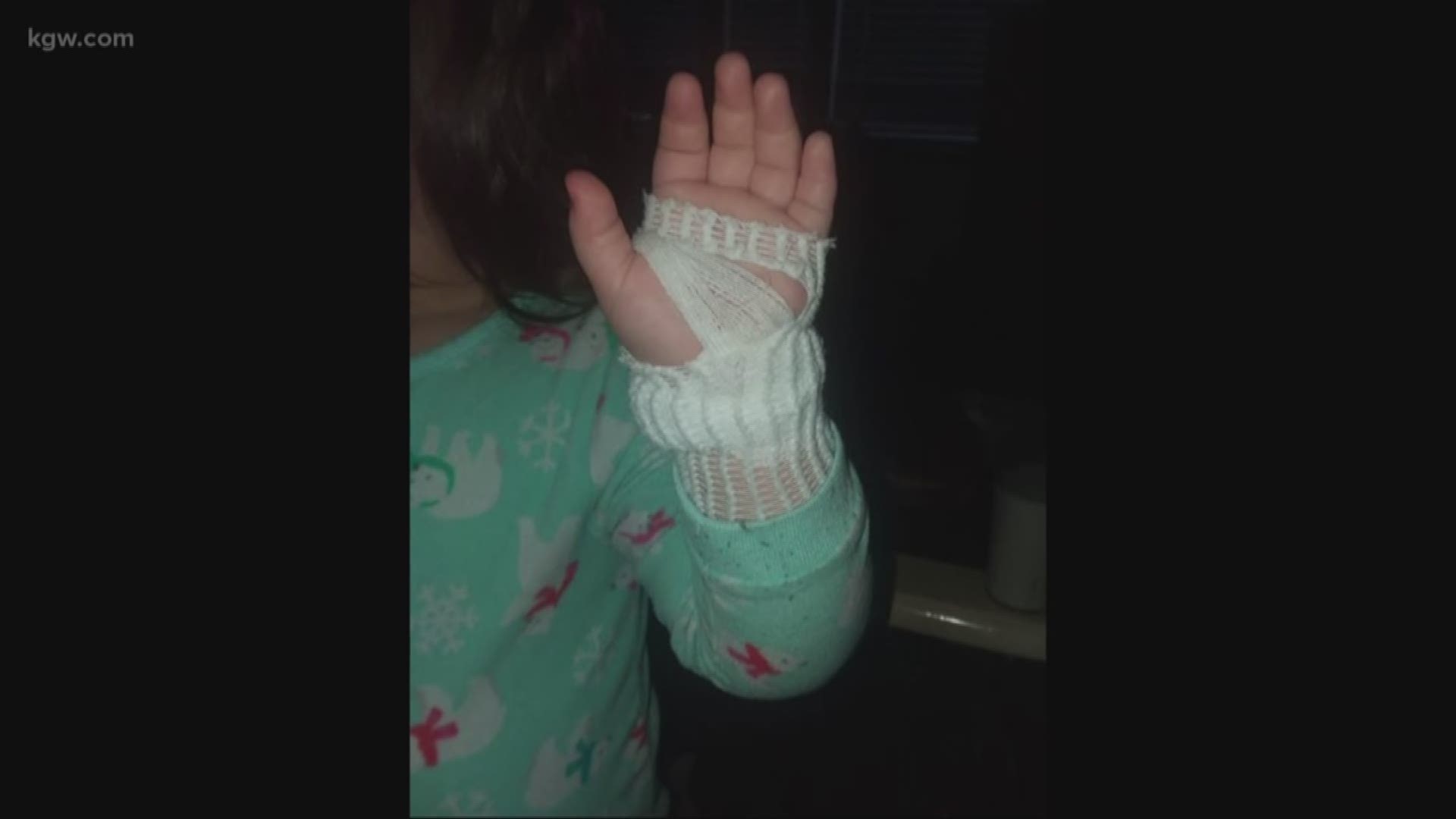 A Portland toddler learned a painful lesson earlier this month when, her mom said, she slipped her hand into a gap in the baseboard heater warming her bedroom.

Michelle Sox said it happened early in the morning on Nov. 11.

“I woke up to a blood curdling scream,” the single mom said while sitting in her North Portland apartment.

Michelle came running. Her daughter, November, was on the floor screaming. She figured the 3-year-old was having night terrors, which she'd experienced before.

“I picked her up. I said, 'Are you OK?' I'm trying to soothe her,” Sox said in an interview Wednesday. “She was totally inconsolable for 30 seconds, and then she's like, ‘Owie! owie!’

Photos taken by Michelle and sent to KGW show a white, bubbling burn on the child’s hand.

She took her daughter to Randall Children’s Hospital, where doctors bandaged the wound and prescribed topical treatments to prevent infection.

“It really, really hurt,” said November, sitting next to her mom on the couch.

While nursing her daughter’s wound, Michelle said she called her apartment building’s manager, who sent a maintenance man to look at the heater.

He assured her it was working properly, and neither adult could figure out how the girl burned herself.

Then, November offered up an extra detail.

“I was putting my hand under the heater,” she said.

That’s when Michelle noticed an opening running along the base of the heater. Just above the opening, the single mom could see a bar running the length of the heater.

When the appliance is turned on, it becomes extremely hot, said Michelle.

Credit: Michelle Sox
The bottom of the baseboard heater

But would the manufacturer agree?

It turns out, the makers of Cadet Softheat baseboard heaters are an arm of a global brand with roots in Vancouver, Washington.

On Monday, KGW emailed photos of November’s burns, along with a summary of her story. On Wednesday, the executive vice president of Glen Dimplex Americas responded with a statement, reading in part:

“Our heaters are designed with the safety and comfort of families in mind. The SoftHEAT baseboard heaters have lower surface temperatures and a more enclosed heating element that is harder to get to than traditional baseboards."

Then the statement added -- "There is an inherent risk to little hands and fingers as coils inside baseboard heaters can get quite hot... just like your stove, toaster or grill, caution should be exercised as young children and pets, and they should not be left unattended while your heater is in use."

After reading the statement during KGW’s interview, Michelle noted November burned herself early in the morning, when November should have been asleep.

“So, what do we do in the meantime? Turn it off all the time? How about you make a better heater that's safer for kids?” she asked.

The statement also said executives were sorry to hear about what happened to November, and they hope she has a quick recovery.

While November is on the mend, her mom hopes no other kid goes through this kind of ordeal.

“I just hope they don't use those heaters in their own homes, so their kids don't experience that,” she said.

In the meantime, Michelle has kept the heater off since November hurt herself.