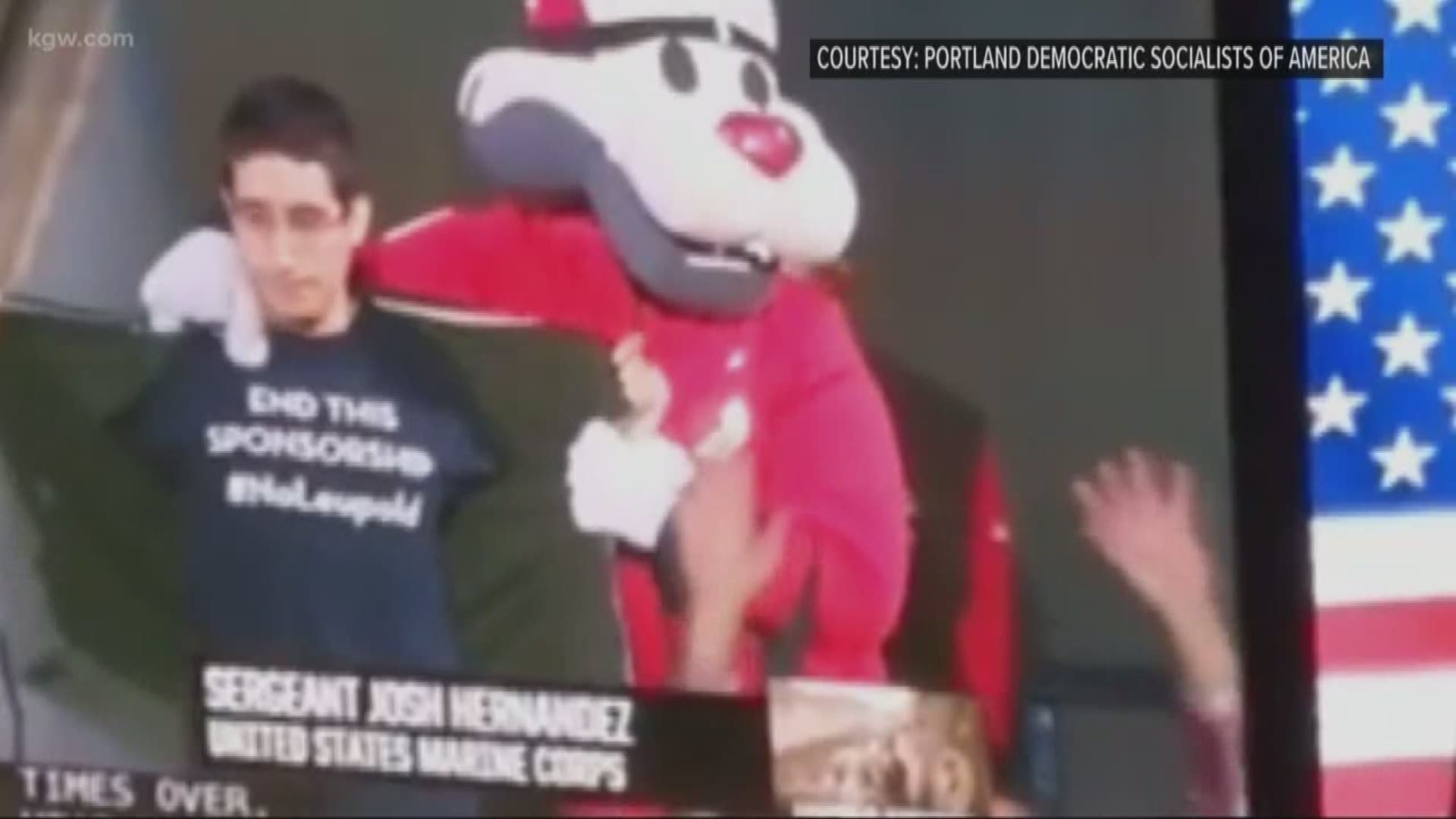 PORTLAND, Ore. — A Portland-area Marine veteran who was honored during Tuesday night's Portland Trail Blazers game protested the sponsor of the in-game segment during his moment in the spotlight.

During a break in the game, Josuee Hernandez was featured in "Hometown Heroes", a segment that recognizes military veterans.

Hernandez decided to protest a business partnership the Trail Blazers have with Beaverton-based Leupold & Stevens, which makes sniper scopes for hunters and military organizations around the world.

“I'll be honest. I was pretty nervous,” he said.

Hernandez is part of the Portland chapter of the Democratic Socialists of America. He said they had an idea to make sure what they had to say would not be missed.

“Leupold & Stevens is trying to like siphon some local good will from their, what I would call, war profiteering,” Hernandez said.

So when the moment came, and the camera was on him, Hernandez unzipped his sweatshirt to reveal a shirt underneath. It clearly displayed his message: “End this sponsorship. #NoLeupold.”

“It was a big event, a lot of people. But I knew that it was important to do,” said Hernandez. “We're generally an anti-war, progressive city, and for them to keep working with Leupold & Stevens is a slap in the face to us and we don't want that anymore.”

Hernandez said he wants to see the Trail Blazers break ties with the company, especially being such a visible and well-loved symbol of Portland.

“I would love it if the Blazers were to simply end their business relationship with Leupold & Stevens,” he said. “Being a veteran shows that we're not going to stand for this.”

KGW reached out to the Trail Blazers organization, and Leupold & Stevens for comment. The Blazers responded with the following statement:

“This program honors the sacrifice and heroism by active duty military, retired military, emergency first-responders and their families. We are sorry that it was disrupted last night and will make every effort to ensure that the Hometown Heroes segment – a favorite of many Trail Blazers fans – continues to honor those who protect our safety and freedom.”

“Leupold & Stevens has for decades been a proud supporter of the active duty military, retired military and emergency first responders who protect the freedoms and safety we enjoy in our country. Our partnership with the Portland Trail Blazers to honor 'Hometown Heroes' is one of the ways we demonstrate our active commitment to America’s heroes. We will continue to operate our business in the most ethical way possible, including adherence to all international and U.S. export control laws, policies and treaties which are strictly enforced by the U.S. State Department. We will not be forced to submit to the agendas of outside organizations.”

The Democratic Socialists of America said after Tuesday night's protest, a number of veterans reached out wanting to do something similar.

They say they plan to keep demonstrating in this way until they see changes.