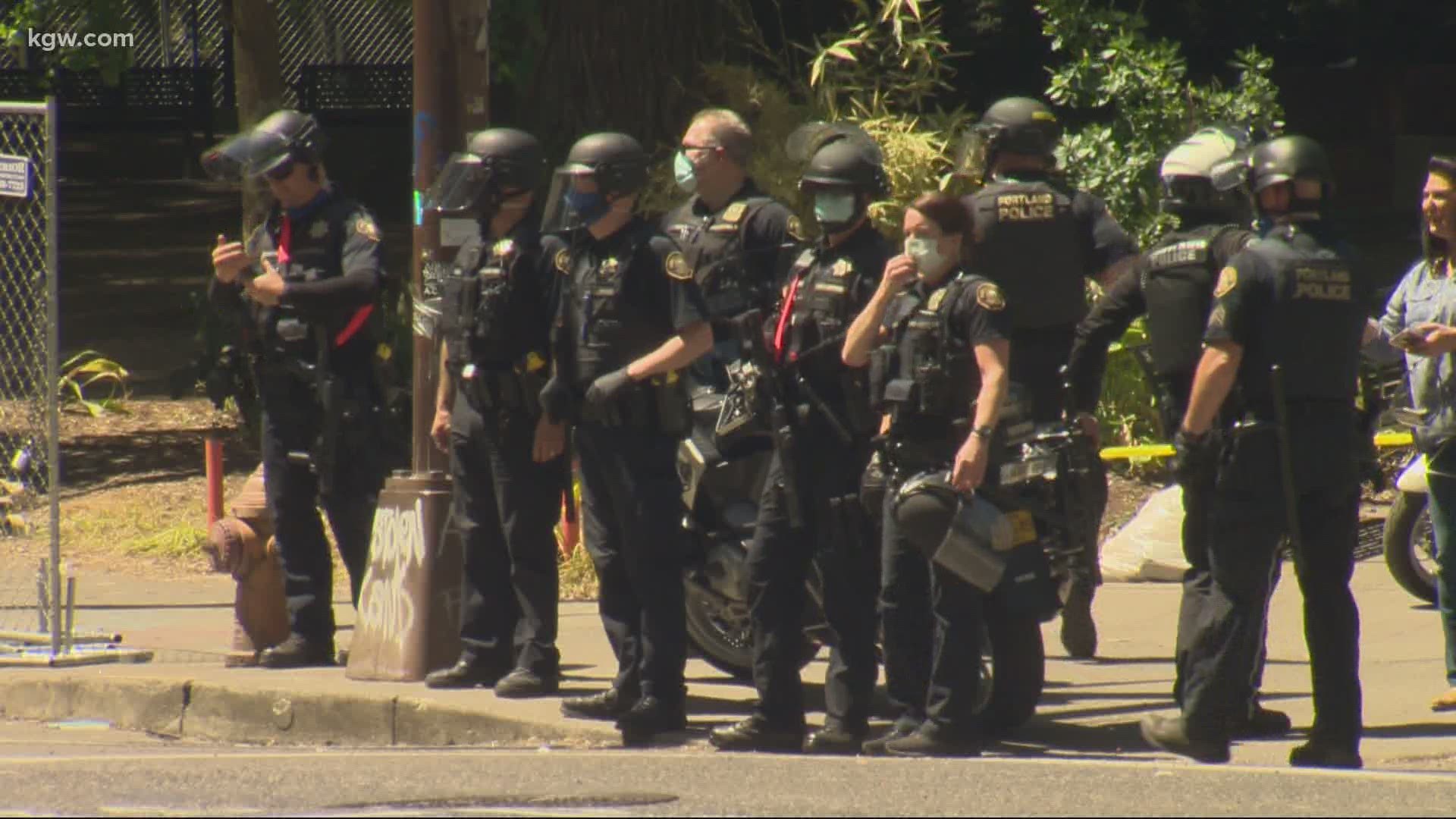 The demonstrators set up camps in Lownsdale Square Park and Chapman Square Park, across the street from the federal courthouse and the Multnomah County Justice Center. They were camping in the parks for the second night in a row.

The Portland Police Bureau ordered everyone, including any journalists, out of both parks at 5 a.m. and said those who stayed would face arrests and force by officers. Fencing was put up in both parks Thursday morning and city crews picked up the trash inside the parks, surrounded by law enforcement.

The move follows more than six weeks of sustained nightly demonstrations outside of the Justice Center and other downtown government buildings. Acting U.S. Department of Homeland Security Chad Wolf weighed in on the ongoing Portland violent protests on Thursday, criticizing local leaders.

At President Trump's urging, federal law enforcement agents arrived in the city over the weekend to defend federal property in Portland.

The police bureau later announced that everyone left the area. The streets near the parks are open to traffic, but the sidewalks are closed.

Portland Parks and Recreation Bureau said the parks remain closed to allow the city to repair the lawns, benches, bathrooms and public art, which have been vandalized and "need immediate attention".

The two downtown parks will stay closed until repairs are finished and the city says the area is safe enough.

The mayor's office sent KGW a statement, saying, "some are using our parks as a staging ground to damage public infrastructure, art, and park assets. We do not condone or tolerate this behavior".

As they watched the fences go up some Portlanders told KGW the fight has gone too far. They support the city taking action and even feel the police have been too passive during these nightly protests.

"I think it's very much necessary because in the absence of that we've had destruction and mayhem every single night, and now even during the daytime," one woman said. "And it's just too much, it's too much."

"What they've done to the statues - burning them - and I lived here all my life, those are a part of my life and it's, like, they're just destroying it. It breaks my heart," another Portlander said. "We were horrified to see they were taking over the park again."

In 2011, during the Occupy Portland movement, camping protesters took over Chapman Square and Lownsdale Square parks for more than a month, before then-Police Chief Mike Reese and Mayor Sam Adams cleared them out and put up fences around the parks.

1 / 28
Jeff Thompson
November 12, 2011: Occupy Portland campers fill Chapman Square and Lownsdale Square parks in the morning, just before the parks are cleared and fences are put up

"Those who intend on doing destruction will. You know, I think they're just taking advantage of the situation and making it worse for everybody," Cude said, "But it's my hope that it doesn't detract from the cause itself to the point where it overshadows that."

"I think the protesting is necessary until the task is completed - the task of dealing with racial injustice," he said.

@MultCoSO assisted @PortlandPolice with removing trespassers from Chapman and Lonsdale parks. Both parks are badly damaged and will need extensive restoration. pic.twitter.com/zpn0WOPnZO

“The city of Portland has been under siege for 47 straight days by a violent mob while local political leaders refuse to restore order to protect their city. Each night, lawless anarchists destroy and desecrate property, including the federal courthouse, and attack the brave law enforcement officers protecting it.

“A federal courthouse is a symbol of justice - to attack it is to attack America. Instead of addressing violent criminals in their communities, local and state leaders are instead focusing on placing blame on law enforcement and requesting fewer officers in their community. This failed response has only emboldened the violent mob as it escalates violence day after day.

“This siege can end if state and local officials decide to take appropriate action instead of refusing to enforce the law. DHS will not abdicate its solemn duty to protect federal facilities and those within them. Again, I reiterate the Department’s offer to assist local and state leaders to bring an end to the violence perpetuated by anarchists.”