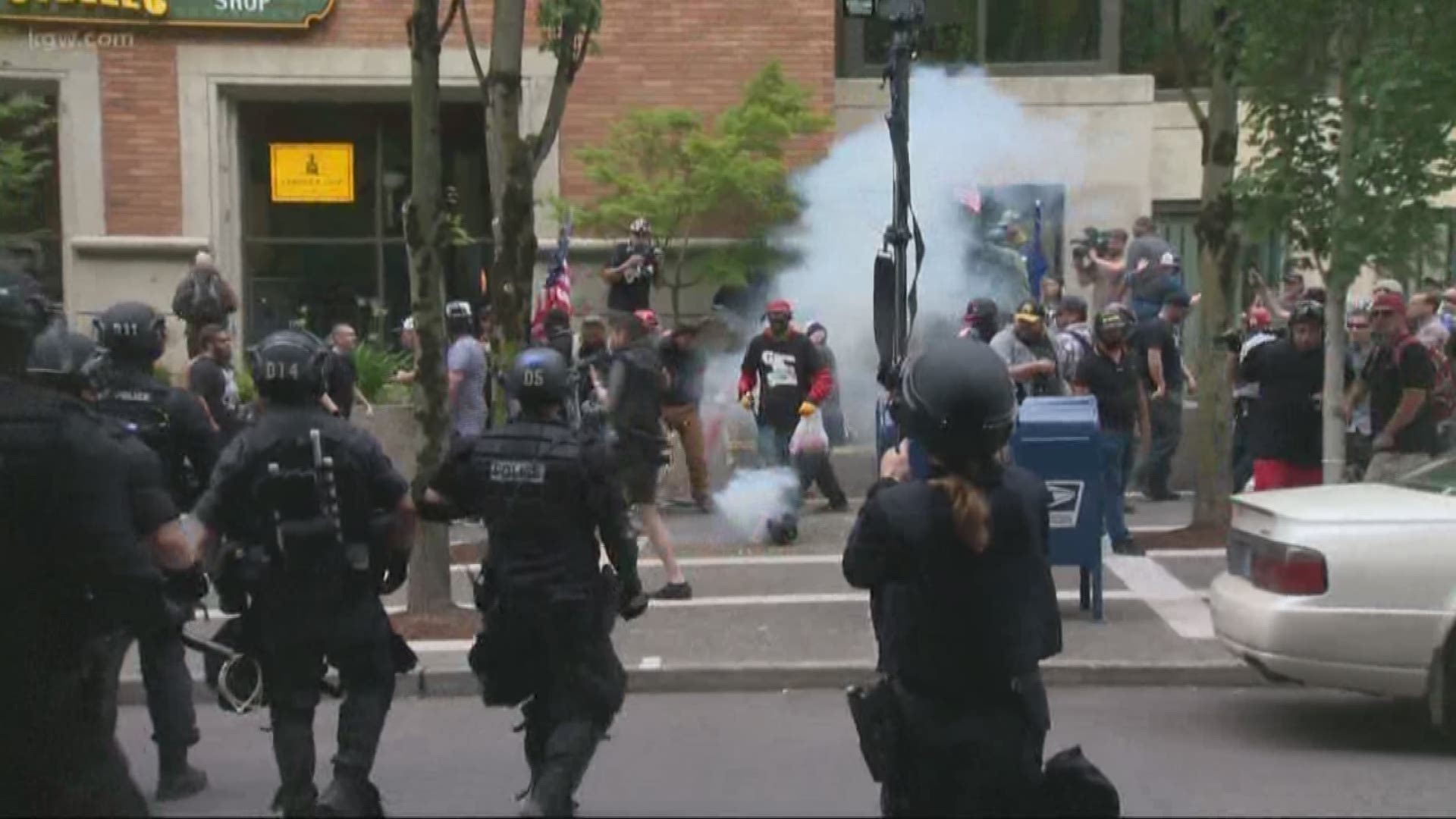 Both Portland Police Bureau officers and Department of Homeland Security police were at the protest in riot gear. DHS told KGW federal officers are on scene because the protest was scheduled on federal property.

The alt-right group Patriot Prayer secured a permit for an event at Terry Schrunk Plaza from 4 p.m. - 7 p.m. Organizers said that event is demonstrating for free speech.

The anti-fascist group Portland Labor Against Fascists scheduled a rally nearby.

Neither rally was focused on President Trump's immigration policy.

Police arrested a total of four people at the event.

Luiz E. Marquez, 46, was arrested in connection to an investigation that started on June 3 during protest that happened in downtown Portland. He was charged with theft in the first degree and assault in the third degree.

Tusitala J. Toese,22, was arrested in connection to a protest on June 8 in downtown Portland. Toese is charged with assault in the fourth degree.

Donovon L. Flippo was arrested also in connection to protest on June 8 in downtown Portland. Flippo was charged with disorderly conduct in the second degree.

Matthew R. Braddock,37, was arrested in connection to a protest on May 31 also in downtown Portland. Braddock was charged with robbery in the second degree and assault in the third degree.

All were lodged in to the Multnomah County Jail.

Earlier Saturday, peaceful demonstrations in Portland and Vancouver drew thousands of participants. Rallies across the country drew hundreds of thousands of people in "Families Belong Together" marches.

'What country is this?': Portland, Vancouver rallies against family separation

7:48 p.m.: Police use flash bangs after a fight breaks out between opposing groups.

7:39 p.m.: There is still tension between opposing groups downtown.

Patriot prayer and proud boys are loading into busses and leaving. pic.twitter.com/iakimdAabc

6:55 p.m.: Police fire what appear to be rubber bullets near protesters, several people put their hands up in response

6:30 p.m.: With police declaring the protest a riot, demonstrators on both sides move back to Terry Schrunk Plaza.

6:05 p.m.: Police detain more protesters as officers call the protest a "riot." Portland police announce that protesters must leave area or be subject to arrest.

Police are now declaring this event a riot. People must leave the area immediately.

Police cancel the protest permit and order demonstrators to leave the roadway.

Fireworks and other objects are being thrown at today's protest around 2nd and Main. Permit is now cancelled. People need to leave roadway and proceed to sidewalk.

5:50 p.m.: Protesters from both groups threw fireworks and water bottles at each other, KGW reporter Art Edwards said.

DHS officers carrying a protester arrested after he would no leave the street in front of Schrunk Plaza pic.twitter.com/vqw6drB1So

4:30 p.m.: Police announced any demonstrators in the roadway at Southwest 3rd Avenue could be arrested.

PPB is telling crowd: 3rd Ave. is open to vehicular traffic. You must immediately vacate the roadway and proceed to the sidewalk If you remain in the roadway, you may be subject to arrest for Disorderly Conduct, Interfering with a Police Officer, and other state and city offenses