Police said four people were arrested in the riot but one was later released. 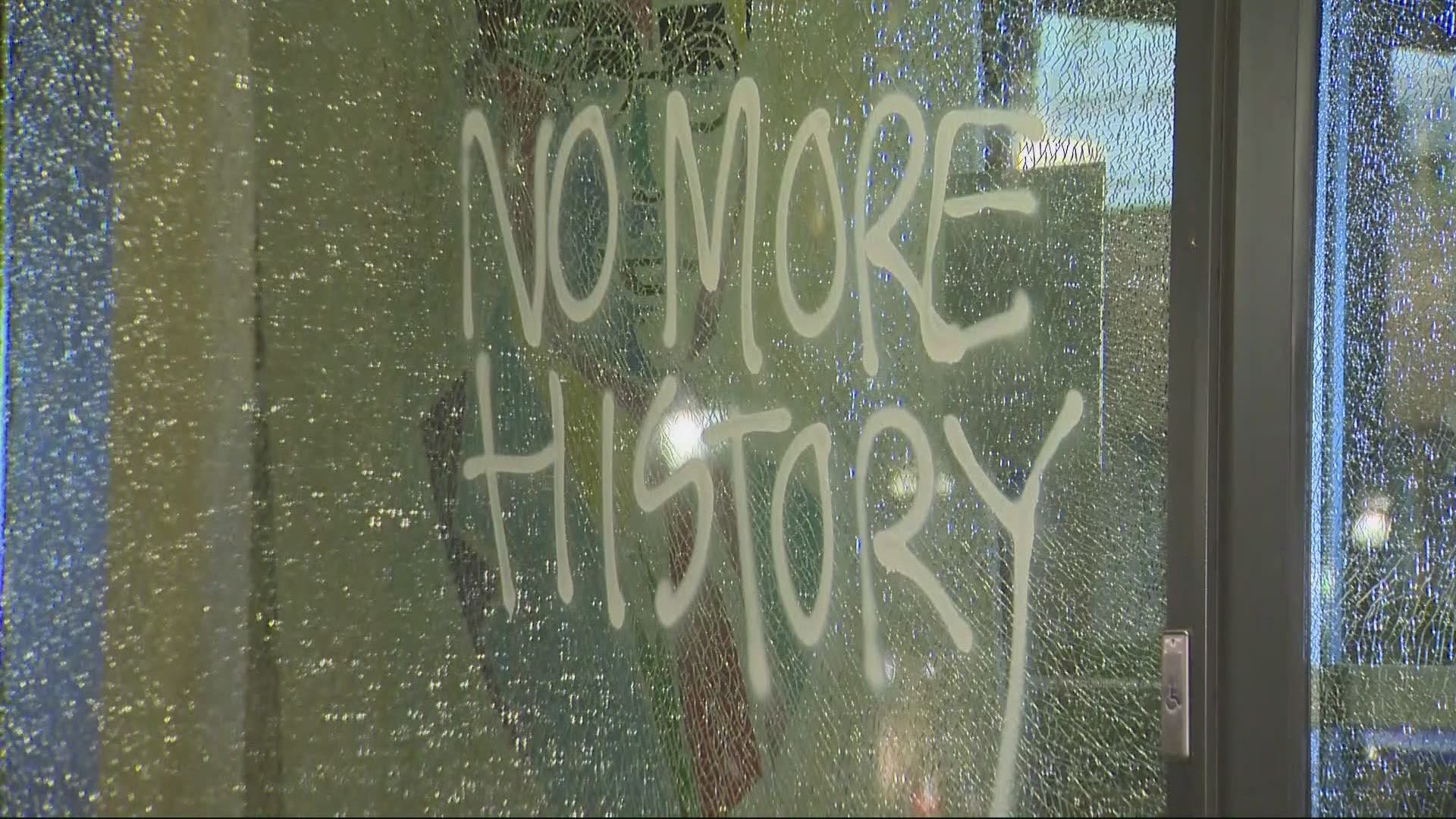 PORTLAND, Ore. — Portland police declared a riot in downtown Portland after anti-police demonstrators started smashing windows Friday night. Four people were arrested, but police later said one person was released "when investigators determined this was the appropriate course of action until further investigation could occur."

The Portland Police Bureau (PPB) said there were two separate marches downtown after 9 p.m., one of which became destructive while the other stayed peaceful.

The one that was declared a riot started in Director Park on Southwest Ninth Avenue and Yamhill Street. At 9:47 p.m., police tweeted that people in the crowd had started breaking windows. A riot was declared minutes later.

People chanting, “whose streets, our streets!” This was shortly after police left scene a few minutes after smoke cleared. #portlandprotests pic.twitter.com/m9Ug5OWMGw

Police ordered the rioters to leave the area or risk arrest or use of force, including tear gas and crowd control munitions.

At about 10:30 p.m., police said a hostile crowd was surrounding them while they were making arrests.

Shortly after 11 p.m., police said there was a "bonfire in the street" at Southwest 4th Avenue and Salmon Street and a dumpster fire one block away at Fourth and Taylor. Portland Fire & Rescue responded to put out those fires.

OPB reporter Sergio Olmos tweeted at 11:26 p.m. that police had started pushing the remaining protesters out of the area.

Prior to the riot, police issued a news release saying they were aware of a "direct action" event set to start at Director Park, and said authorities were planning for the possibility of violence or criminal activity.

“The deliberate and criminal actions of individuals rioting in downtown Portland on Friday night significantly endangered life and property," said Multnomah County District Attorney Mike Schmidt. "It is unacceptable. This destruction does not align with community values and has no legitimacy. It is harming our city, county and state. There are multiple criminal investigations underway to identify those responsible for last night's criminality."

Police said the following people were arrested and charged:

Meanwhile, the march that police said remained peaceful started at Waterfront Park, where a vigil was held for Adam Toledo, a 13-year-old Mexican American boy who was shot and killed last month by Chicago police.

A vigil for Adam Toledo in downtown Portland.

Demetria Hester and other Black Femmes are leading this event pic.twitter.com/hHy3gtSyeG

Police said people in that group crossed the Hawthorne Bridge and blocked traffic downtown, but there were no reports of violence or destruction.

Hundreds of Black Lives Matter demonstrators are marching on the Hawthorne bridge pic.twitter.com/Fv5YphVhq8

On Friday afternoon, anti-police protesters showed up at Lents Park in Southeast Portland where police shot and killed a man earlier in the day. This led to some tense moments between police and protesters, and officers used inert smoke canisters to separate themselves from the group.

The circumstances of that shooting are under investigation.