Police closed Pioneer Courthouse Square after they said demonstrators threw milkshakes, which may have contained quick-drying cement, at officers. 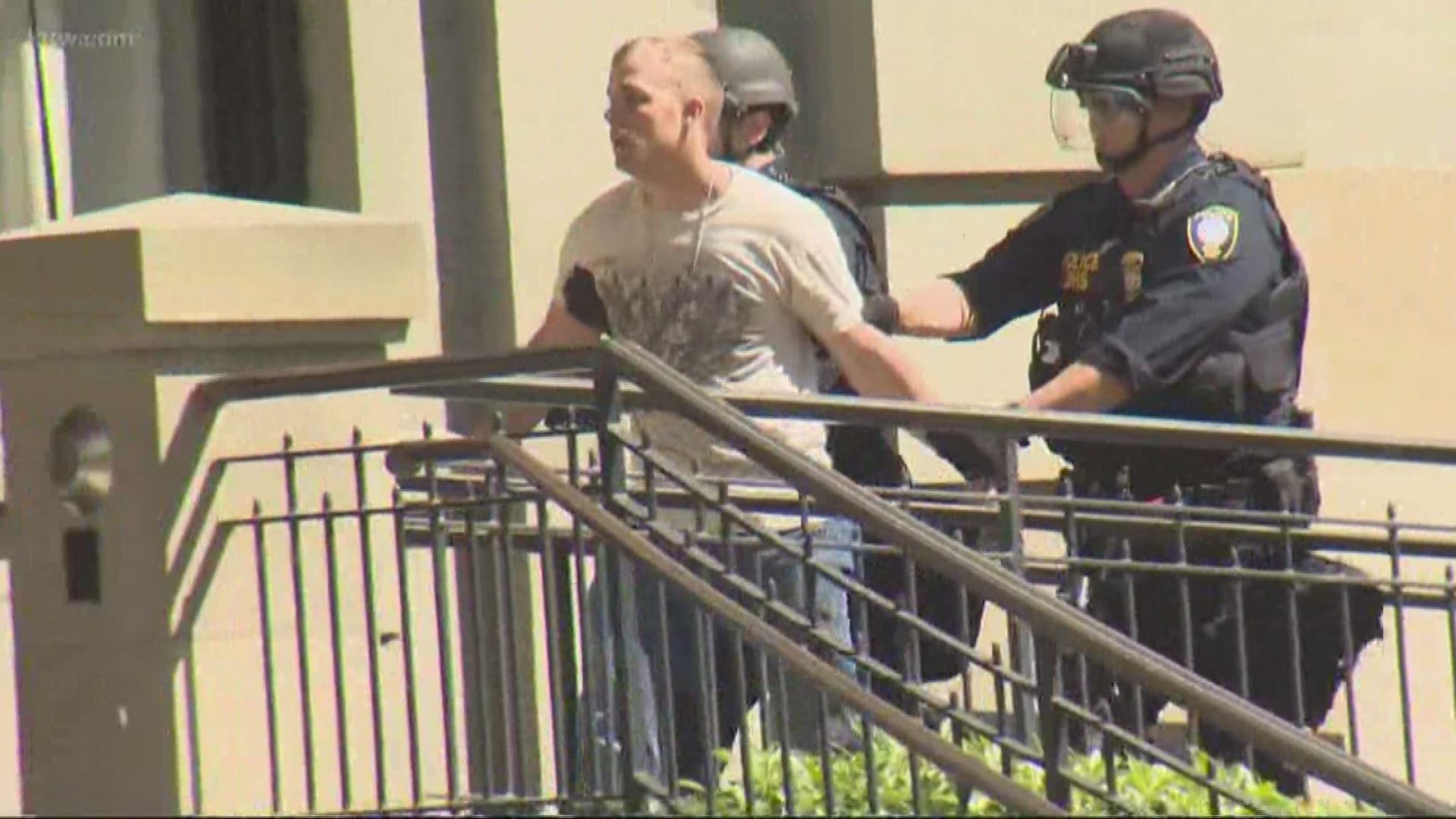 PORTLAND, Ore. — Dueling demonstrations between hundreds of left-wing anti-fascists and dozens of right-wing protesters in downtown Portland turned into a mix of shouting matches and isolated fights Saturday afternoon.

Three people were arrested in connection with the demonstrations, according to Portland police.

Shortly after 3 p.m., Portland police declared the dueling demonstrations a "civil disturbance and unlawful assembly." They said people would be subjected to arrest or use of force if they didn't leave the area around Pioneer Courthouse Square.

The anti-fascist demonstration began at noon at Lownsdale Square where a couple hundred people were reportedly dancing and enjoying milkshakes.

At around 1:15 p.m., the demonstrators began marching on the streets toward Waterfront Park but were met by police, who told demonstrators to get off the street because the march was not permitted.

Jim Ryan, a reporter for The Oregonian, recorded video showing anti-fascists attack conservative writer Andy Ngo. The video shows him being pelted with milkshakes, eggs and silly string. The video went viral, with more than 9.5 million views on Twitter.

Ngo has been at several past clashes between left- and right-wing protesters in Portland, and his coverage has drawn the ire of anti-fascists.

He later tweeted from the emergency room, saying someone stole his camera equipment. KGW reached out to Ngo and to Portland Police asking if anyone has been arrested or charged in connection with this, but did not receive a response.

The marchers briefly convened at Waterfront Park before heading back into downtown Portland.

Police blocked marchers from going to Pioneer Courthouse Square where a separate demonstration, organized by the right-wing "HimToo Movement," was taking place. Proud Boys were also reportedly at the rally. The opposing groups were separated across the street from each other.

After several people contacted KGW saying there was no cement mix in the milkshakes, KGW reached out to Portland Police to ask how or why they made that determination.

A representative for the Portland Police Bureau emailed a response to KGW. The full response is below:

Prior to this event there was information circulating that some participants planned to throw milkshakes at others. This is a crime. PPB received information during the event that some people were mixing a concrete like substance into the milkshakes. This caused us concern for people’s safety both in the event of ingestion or exposure, especially to the eyes. We put out the tweet to bring attention to this potential hazard and to encourage people to contact us if they were the victim of a crime.

A Lieutenant in the field broadcast information of his observation of a cup with appeared to have material on it consistent with quick drying cement.

After the tweet was sent out, we received an anonymous email with a “recipe” for the milkshakes.

Medical teams from Portland Fire & Rescue were helping people who were injured.

Police asked people who may have witnessed violent assaults that occurred on Southwest Morrison Street between 5th and 6th avenues to send video links and information to crimetips@portlandoregon.gov.

Demonstrators had cleared the area around Pioneer Courthouse Square by 4:30 p.m.

Saturday’s clash came nearly a year after a clash between Patriot Prayer and anti-fascists turned into a riot.