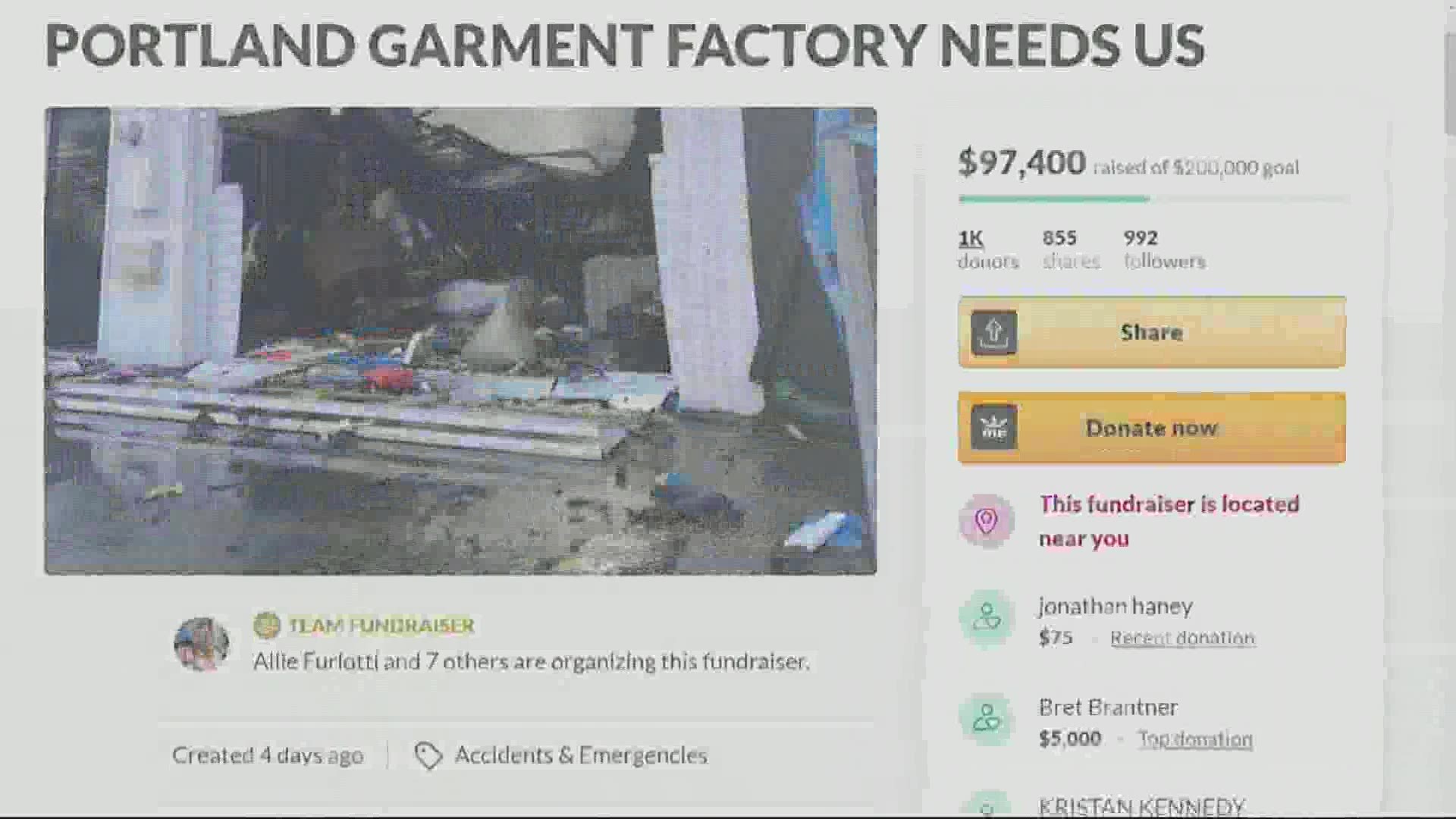 PORTLAND, Ore. — It's been a long and devastating week for one Portland business. Fire destroyed Portland Garment Factory on Southeast 79th and Stark early Monday morning. Investigators ruled it arson.

Located in the Montavilla neighborhood, Portland Garment Factory produces clothing and soft goods. Just two days before the fire, owner Britt Howard said she had been feeling extremely positive about work and the future of her business.

“I went home to my husband on Friday and said, ‘I'm feeling so creative and alive and actually proud of myself,” recalled Howard. “‘Something is happening. Something is about to change.’ I actually said those words.”

That change came early Monday morning and was not what Howard expected.

“I woke up to a call at 5 a.m. that my building was on fire, and it was just a complete nightmare,” said Howard.

On her way to her building, Howard could see the flames rising from miles away. Thirteen years of work and a lifetime of dreams, up in smoke.

“I was just crying and screaming in my car,” said Howard. “I almost threw up when I saw it.”

Investigators ruled the fire arson. Security footage shows the suspect and the fire starting in a nearby dumpster before spreading to Howard's business.

“I know that they are a person with mental health issues and that's something that needs to be addressed in this city, urgently,” said Howard. “It's burned down my business. Insurance companies aren't insuring businesses the way they were in Portland, before.”

It's not without compassion that Howard shared those words. Compassion, community and giving back are cornerstones of her business. Portland Garment Factory was one of the first businesses to mass-produce and donate face masks at the onset of the pandemic. Over the years, they've made countless coats and blankets for donation drives. In that spirit, Howard's friends insisted on opening a GoFundMe account to help. Money raised will help Howard and her employees relocate.

“It could have been me,” said Jarek Szymanski, who owns Threshold Brewing & Blending across the street from Portland Garment Factory. His is one of several Montavilla businesses that donated a portion of their sales from this week to Howard’s fundraiser.

“Everybody knows one another, and people have been trying to help each other as well whenever they can,” said Szymanski. “I don't even know what to think about it. This was a terrible act.”

By Friday night, supporters had raised nearly $100,000, which overwhelmed Howard.

“It's hard to talk about without getting emotional,” said Howard. “I had someone write on my Instagram that this isn't about taking; you're not taking from people. Taking is what the person did who lit this fire. That was actually a very helpful way to think of it for me because I love to be a giver, and I love the community so very much.”