The Smalls have helped neighbors remove over a million pounds of debris since last year's Echo Mountain Fire. The work isn't done, but new homes are popping up. 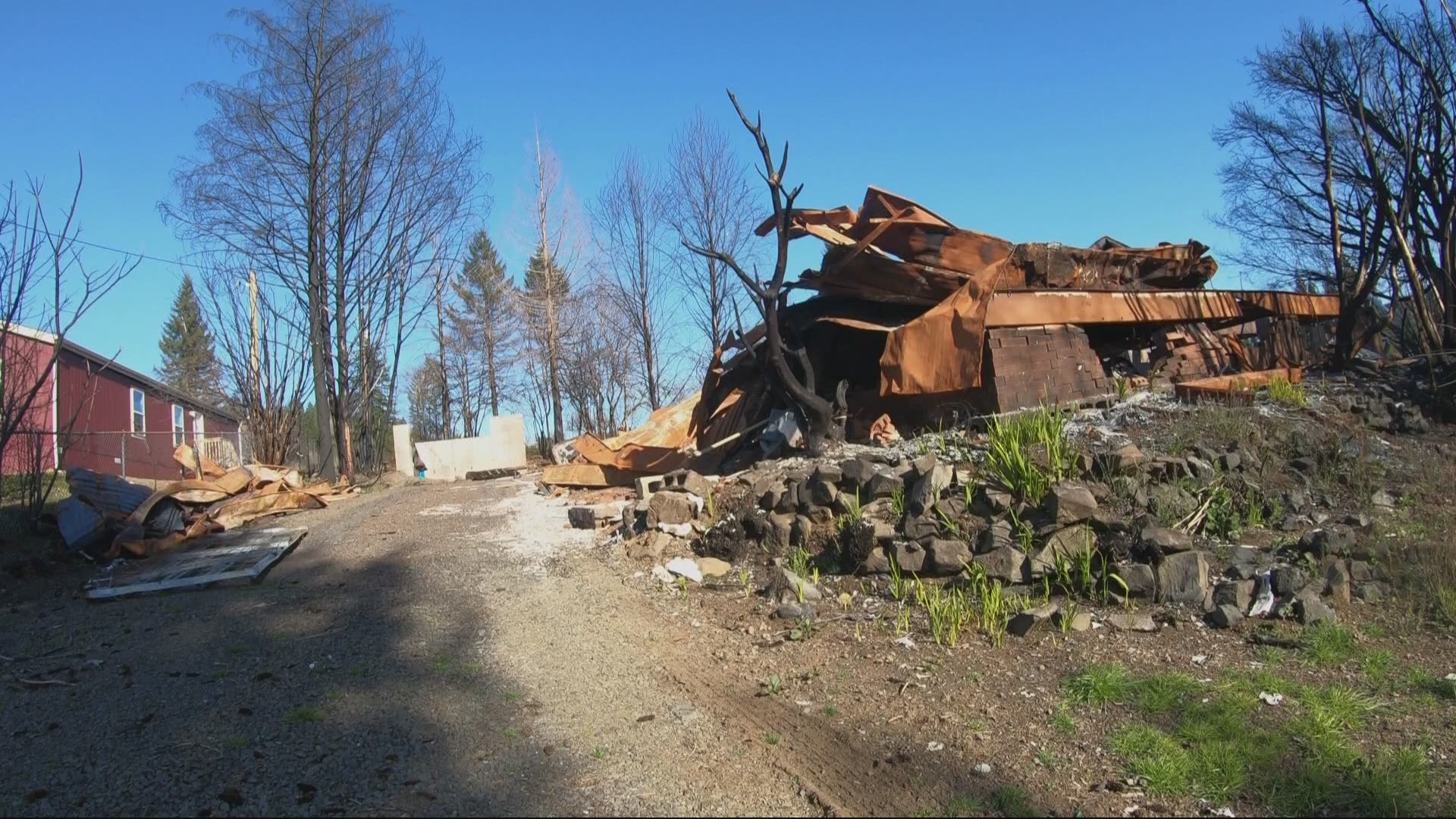 OTIS, Oregon — Standing where her dad’s house once stood in Otis, Teresa Ganong reflects on what the Echo Mountain Fire took from her family. It’s been seven months since the fire destroyed over 280 homes.

“At first when we came up here, it was a lot of despair. Now, there's hope. It's amazing to see how quickly everything has changed, and how the lots are coming from being piles of ash and rubble and metal to getting ready to have a home put on it,” Ganong said.

Clean up may be slow, but it’s steady.

“We've got gray ones and blue ones and red ones and yellow ones and so it's going to be a very beautiful neighborhood once it's all done,” she said looking around at new houses sprinkled across the landscape.

Each of the charred lots represents countless memories for so many. Neighbors are determined to find the good in a fight long outlasting the flames.

“It’s been really great, doing the cleanup and helping all these people get home, but now there's more that needs to be done,” said Melynda Small, an Otis resident for 20 years.

“This town is spectacular. The people of Otis are amazing people,” she said.

Melynda and husband Tye have been helping every day since Oct. 23 clearing debris, about a million pounds from 80 properties. Seventy percent of residents were either underinsured or had no insurance at all, adding to the Ganong’s heavy lifting.

“My father had no insurance. So we didn't know how we were going to clear his property and get rid of everything,” Teresa said. “Tye and Melynda, they were the reason that his lot is cleared and ready to have a home put on it…If it wasn't for them, we'd probably still be standing here looking at a pile of rubble.”

If you’d seen Tye and Melynda cleaning up recently, you’d realize why they’re out there.

“It's covered in dead trees and underbrush. So he's just trying to clear that out because we can't even start building our home until that's cleared out,” Melynda said as Tye cut down dead trees at their property. “We’re a family of seven. My father-in-law lived with us. Yeah, I mean, we lost everything,” she added.

Before the fire, they didn’t know many neighbors. Today most of these folks see it as a fresh start. Teresa’s dad Pat had his new home delivered days ago.

“I think it's made our community stronger, through people like Tye and Melynda that have to pull together and really helped keep everybody going,” Teresa said.

“I've lived in a motel for the last seven months with my four children,” Melynda said. “And I don't like it, and I don't want everyone else to have to deal with it either. So to get people home as soon as possible. It's just the godly thing to do. The Jesus thing to do,” she said.

The Smalls are operating through a nonprofit set up to specifically benefit those rebuilding in Otis who are underinsured or without insurance. You can find out more about the The Small Foundation here.

RELATED: Four months after the Echo Mountain Complex fire ravaged through Otis, the cleanup is nowhere near done