In some cases, hotels will be turned into affordable housing. In another case, the hotel will be a temporary place to stay with resources to help on-site. 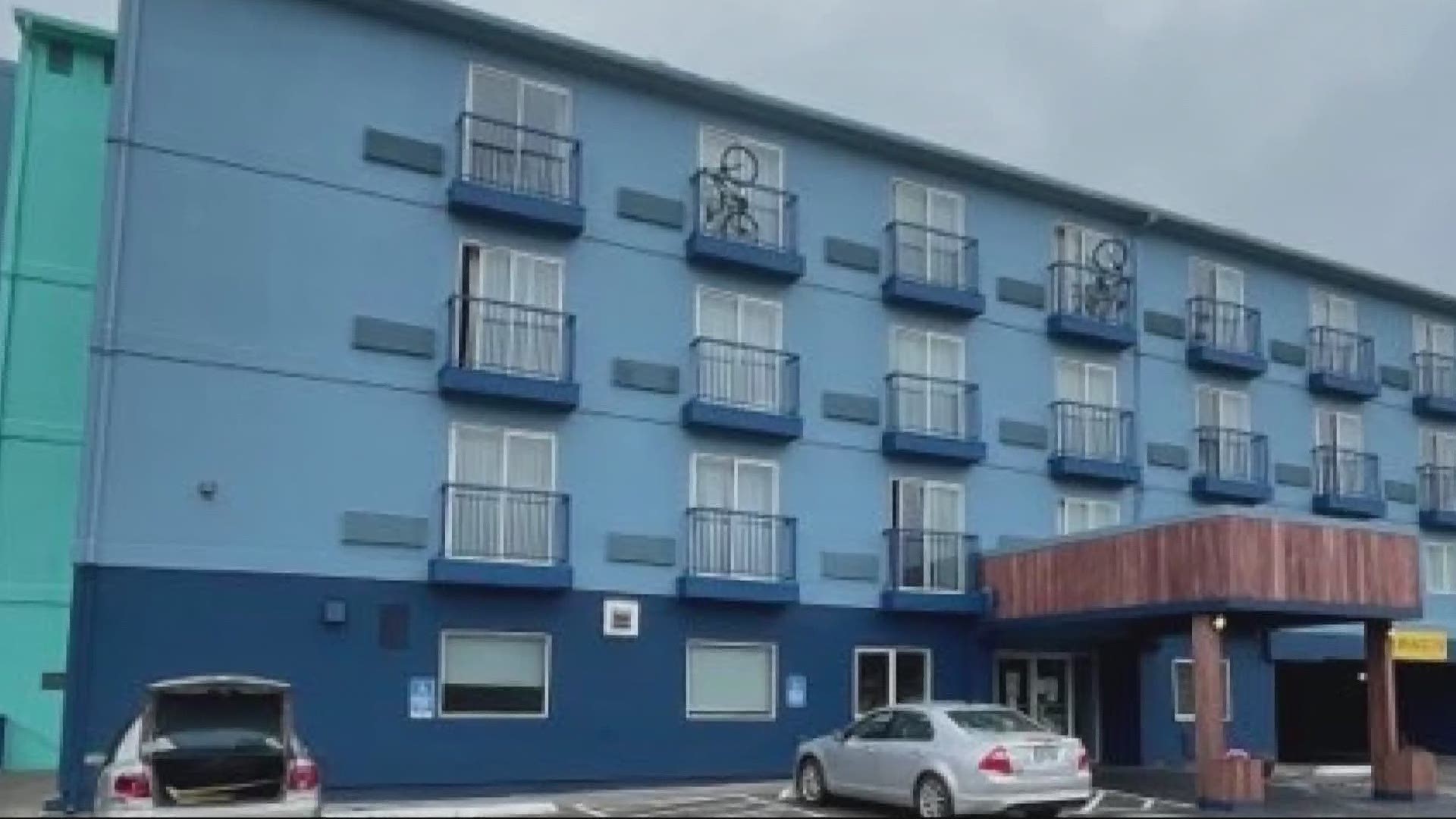 LINCOLN CITY, Ore. — Wildfires in September of 2020 destroyed about 4,000 homes across Oregon. In areas that already had affordable housing issues, the fires exacerbated the problem.

In an effort to provide shelter and keep wildfire survivors safe from COVID-19, many were moved into hotels.

Sabrena Earl, who previously lived at her mother’s house in Otis, has stayed in nine hotel rooms since escaping the fire in September. Their home burned down.

“I have a view of the river kinda, so that’s really nice,” said Earl as she showed us around her room.

Earl gave us a tour of her hotel room. After staying in nine different hotel rooms between October and May, she hopes her current hotel will be her last.

“The staff here is more accommodating to us and our situation. It’s not just random hotel staff. I guess they’re supposed to help us with finding another permanent place,” said Earl.

Right now she’s staying at the Inn at Lincoln City. Fortify Holdings, a real estate business aimed at turning hotel and motel rooms into affordable housing, recently bought it and plans to change the name to Haven at D River.

“The Fortify effort is an act of social entrepreneurship, if you will. It’s really unique in providing this resource,” said Ed Flick, director of emergency management for the Oregon Department of Human Services. He is responsible for providing shelter to Oregonians who were displaced by the fires.

He said Fortify holdings is working on converting hotel rooms in Southern Oregon and on the coast in Lincoln City.

“There’s a total of 360 currently in Jackson County that we have under contract and there’s another 100 in Lincoln County,” Flick said.

Back inside Earl’s hotel room, it’s the small things she misses about having a place to call home.

“I miss waking up in the morning and frying me an egg, you know what I mean,” said Earl.

Earl said in her experience, housing on the coast is hard to find. She doesn’t know what the future holds but she’s just feeling grateful she has a place for now.

“It’s stressful but at least we have a good place to stay,” she said.

Flick said Fortify’s efforts in its pursuit to provide more affordable housing will help alleviate pressure on commercial hotels that have housed fire survivors but are eager to get back to their core business as COVID-19 restrictions ease and tourist season approaches. He said because Fortify Holdings’ hotels don’t operate as hotels, they’re not under the same pressure to cater to customers and can focus on the needs of survivors.

He said right now there are a little over 1,100 fire survivors are still getting help from the state with a place to stay and occupying various hotel rooms, travel trailers, and other properties.

“Over the course of that time, since September, we’ve provided shelter to over 4,200 Oregonians, many of which have been able to move on from shelter and continue their own recovery,” said Flick.

In the meantime, there’s another similar effort in Lincoln City aimed at helping fire survivors. The nonprofit, Northwest Coastal Housing, bought the Paradise Inn & Suites in March. The nonprofit typically develops affordable housing but this is the first time it bought a hotel. Acquiring a hotel that’s meant to help fire survivors, among others in the community, is where the similarities with Fortify Holdings’ venture stops.

The Paradise Inn & Suites won’t be turned into affordable housing. Instead, it will operate as a sort of “catch-all” for anyone who needs a temporary place to stay. The idea is to be flexible and respond to the varied needs of the community. That includes temporarily housing fire survivors.

Shiela Stiley, executive director of Northwest Coastal Housing, describes the hotel as an intersection point, where people from different groups in the community can get help. She said the hotel is different than your average hotel and will have a person onsite, designated to help connect people with resources.

“Instead of just taking someone and throwing them into a hotel room and having them fend for themselves, that isn't what we're doing. We're having people come into a space that's safe. It's clean, we have oversight, and we have navigation [to help people connect with resources] and those are the key pieces you will not find in a standard hotel,” said Stiley.

She said staff at the hotel will be operating under a trauma-informed care model, meaning staff will address the needs of each individual in a more caring and sensitive way.

“That’s our job to be educated, to get ourselves in a space of understanding trauma and to go, ‘You’re fine’,” Stiley said.

She said the hotel purchase was funded by Project Turnkey. The Oregon Community Foundation oversees the state program. On its website, the description reads, “The Oregon Legislature allocated a total of $65 million for Project Turnkey, for the purpose of acquiring motels/hotels for use as a non-congregate shelter for people experiencing homelessness or at-risk of homelessness.”

According to Stiley, the hotel will technically be used for transient lodging for temporary occupants.

“So that really means we’re going to be working with our partner agencies to provide temporary lodging for individuals,” she said.

Right now the plan is for local and state agencies to help fund stays that will range days, to weeks, to months, whatever the need may be. The people who stay at the hotel will be vetted by community organizations or the state.

At this point, because the need for temporary shelter is so high, Stiley said people won’t be able to walk in or make reservations. Spots are already spoken for.

“We have about 51 people on a waitlist,” she said.

Fire survivors and others in need of a temporary place to stay are expected to begin moving in this week.

Flick said Oregon DHS is working with both Fortify Holdings and other Turnkey Project properties to get people moved from commercial hotels, into their properties.

“Having safe and secure housing for people is at the center of everything we’re trying to do and relationships with Project Turnkey and Fortify Holdings are going to offer new opportunities for people to move forward in their lives,” said Sherryll Hoar, a communications officer for the Oregon Department of Human Services.