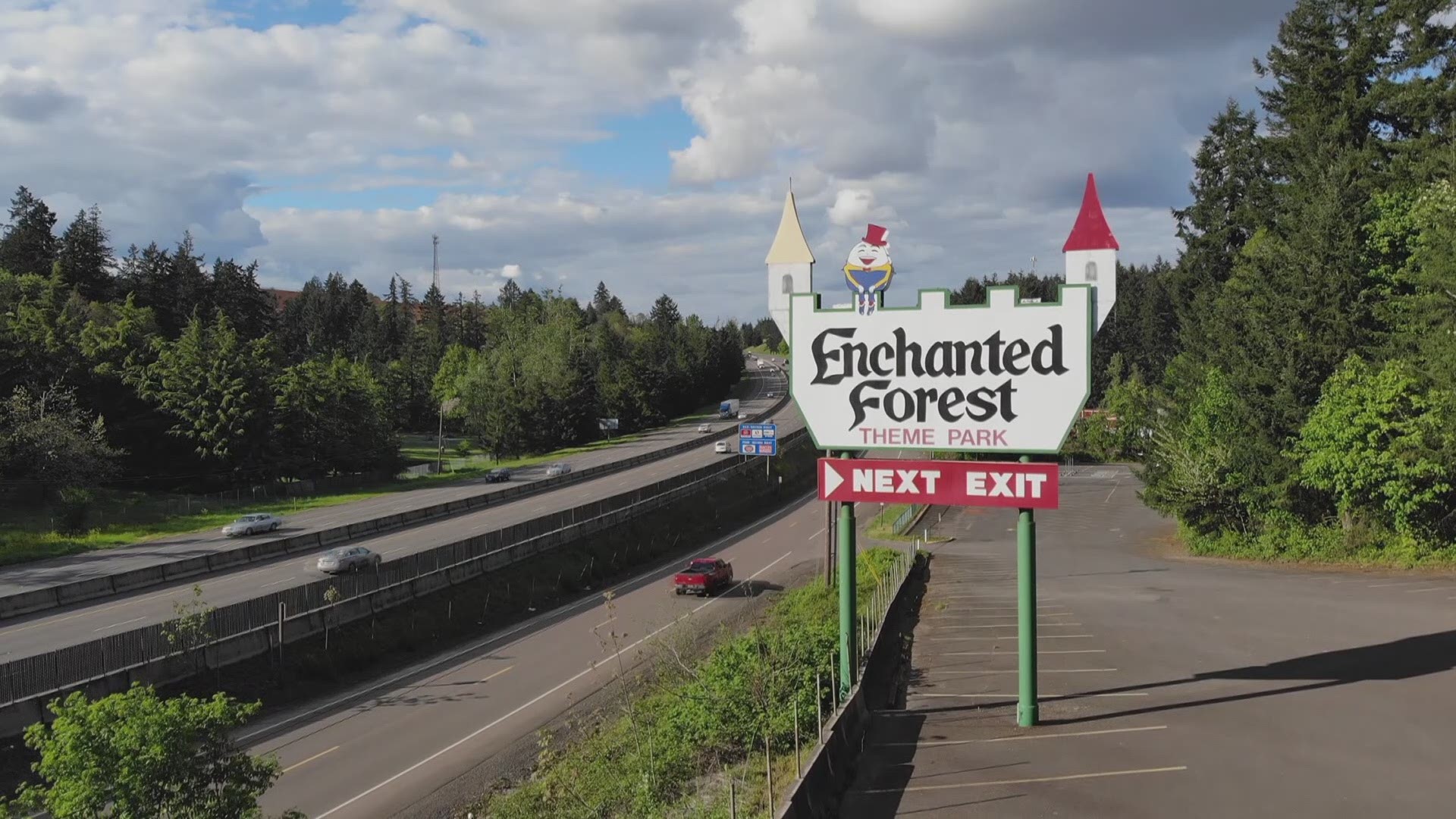 But Humpty Dumpty's welcoming smile belies a troubled year for the park.

Inside, its creator, 91-year-old Roger Tofte, has been busy riding his moped from one trouble spot to the next, stopping to patch up cracks in the sidewalk with a bucket of cement.

Tofte and three generations of his family have spent months preparing the beloved park to reopen after numerous obstacles, including a COVID-19 shutdown, wildfires and an ice storm.

On Wednesday, the park opened full-time as Oregon reopened its economy and lifted most COVID-19 restrictions. The park will now be open daily from 10:30 a.m. to 5 p.m. with no capacity restrictions.

The Enchanted Forest will celebrate its 50th year on August 8 with a cake cutting ceremony in the park's western town of Tofteville—a milestone that, last year, Tofte and his family weren't sure the park would reach.

When the father of four bought 20 acres of land in 1964, thick with bushes and trees on a steep hillside off the interstate, many people were quick to tell him what they thought of the idea.

"Oh, definitely, they said he was crazy when I was growing up," she said.

Tofte once thought he'd like to be an illustrator for Saturday Evening Post Magazine, but after a family trip to Minnesota he noticed Oregon didn't have any roadside attractions like the ones he saw on their journey to the Midwest.

So Tofte turned his illustrations into handmade cement sculptures with a vision of building his own roadside amusement park. He made Humpty Dumpty on his wall, the crooked man in his crooked house, the old woman in a shoe.

"When we were kids, they were in our backyard," said Tofte's daughter, Mary Tofte.

It took Roger Tofte seven years to get the park ready for its grand opening.

"After three years, I got to wondering, should I keep going? But then I thought, well, I've gone this far, I might as well keep plugging away," said Tofte.

The Enchanted Forest finally opened in August of 1971 and became a beloved attraction. But the obstacles of 2020 almost ended its nearly 50-year run. Tofte's daughter, Susan Vaslev, co-manages the business side of the park with her sister, Mary Tofte.

"There is no year like this. We knew financially we were in big trouble," Vaslev said.

With COVID-19 capacity restrictions and only a six-month window for its operating season, the Enchanted Forest was in a deep financial hole.

Something even worse was on the horizon.

In the middle of the pandemic, September east winds whipped up a historic wildfire, blowing it down the Santiam Canyon through the small town of Gates.
The flames didn't touch the park itself, but did scorch its soul.

"Six o'clock in the morning, I got a call from dad saying Wyatt and Peggy had died in the fires," Vaslev said.

Roger Tofte's great-grandson Wyatt, 13, and his dog, Duke, had died trying to save his grandmother, Peggy Mosso.

"Peggy and Wyatt were just the sweetest people you'd ever want to meet. Losing them was just heartbreaking," Vaslev said.

But just like in a fairy tale, there was magic in the Enchanted Forest.

Within days, the community rallied around the park and family, contributing more than $800,000 to two separate fundraisers. The Tofte family was overwhelmed with gratitude.

"It truly is a magical feeling," said Vaslev.

"It was kind of unbelievable all the support we had," said Roger Tofte.

The park was set to reopen with limited capacity in mid-March. Then, a February ice storm brought down hundreds of trees, causing an estimated $1 million in damage.

Vaslev pointed to what was left of towering trees the wind and ice had snapped in two near the park's popular children's rides.

"That damage was caused by one of these trees coming straight down like a spear. It cuts like butter," Vaslev said. "We had a kiddy train here. You see all those trees—they fell across here and just smashed the kiddy train."

The GoFundMe donations helped pay to clean up storm damage. Hundreds of fans of the park also bought personalized bricks for $250 each to help support the Enchanted Forest. The bricks now line the cobblestone road through the park's English Village.

The bricks contain inscriptions, many of which expressed their love for the park over generations—messages like For years of fun, past and future - The Ripple family.

"We have a lot of people return year after year," she said.

Roger Tofte wasn't about to let all those people down. He and his family were determined to reopen the park in time for its 50th anniversary on August 8.

"He always says, 'a winner never quits and a quitter never wins.' And that's exactly the philosophy of our family," Vaslev said.

But there was one more obstacle in the way of reopening: the family received threats when they announced a reopening policy requiring proof of COVID-19 vaccination for entry into the park. The family waited for pandemic restrictions and mask mandates to ease before opening the park's gates to guests again.

In June, guests who bought a limited number of tickets online lined up outside, waiting for the Enchanted Forest to open for the first time in eight months.

"We were terrified they wouldn't make it through everything—the wind, the ice, everything," said Eleni Marschman, who came to the park with her daughter, Joana, and granddaughter, Stella. Joana had been coming to the Enchanted Forest since she was a little girl and now wanted to share the experience with her four-year-old.

"This is an Oregon treasure. I feel like if it ever went away, a part of Oregon would be missing," Joana Maletis said.

Roger Tofte greeted Eleni, Joana, and Stella as they entered the park.

"We want to tell you we are so happy you are the first ones for the season here," he said. Vaslev thanked the visitors for helping the Enchanted Forest survive.

"It's an honor to meet you. Your support just means so much to us. It's been a long, long year," she said.

Eleni, Joana, and Stella first headed to the English Village to try to find the brick they purchased.

"Do you see your brick, Stella? That is so cool. Our names will be forever," Joana said.

Not far from Stella's brick, there's a special memorial brick for Wyatt Tofte, his grandmother, Peggy, and Wyatt's dog Duke.

"This means a lot to us," said Roger. "It's something that will be here for a long time, we hope."

Just above the memorial brick, there's a plaque thanking the hundreds of people who stood by the family and helped the park survive its toughest year yet. Like Humpty Dumpty, the Enchanted Forest had a great fall, but Tofte, his family, and those who love them did what all the king's horses and all the king's men couldn't: they put it together again, so the dream Roger Tofte built may continue to enchant for generations to come.