Students in Oregon and Washington joined with others across the county and started walking out of classes Wednesday in a call for gun safety. 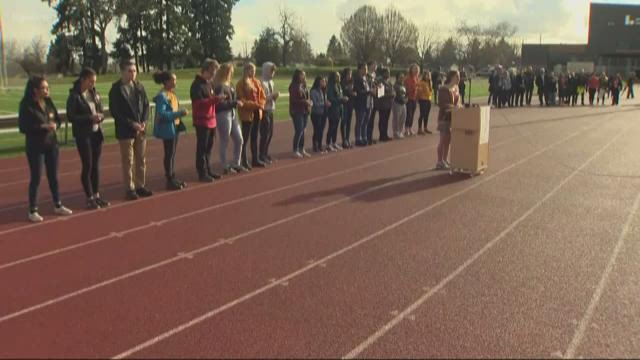 On the KGW News app? Tap for latest updates

Students in Oregon and Washington joined with others across the county and walked out of classes Wednesday in a call for gun safety following the death of 17 on Feb. 14 at Marjory Stoneman Douglas High School in Florida.

Watch the live stream of the local walkouts here

Warning their futures are being stolen from them, tens of thousands of young people across the U.S. walked out of school to demand action on gun violence Wednesday in one of the biggest student protests since the Vietnam era.

At Lincoln High School, students placed 17 desks on the football field where they gathered. They were joined by Mayor Ted Wheeler.

At Roosevelt High School, an estimated 600 students walked out of class.

Seventeen students held a candle listening to uplifting speeches, including one by a teacher there who was a student at Douglas.

“We can take it to the streets, we can scream and yell, we can protest and march. But you need to make lasting change. And no one is going to do it for you!” said Tracie Talerico.

The students were joined by Superintendent Guadalupe Guerrero, Gov. Kate Brown and other elected officials.

Brown said she was impressed by the students and vowed to tackle gun control locally if congress won’t do it nationally.

“Banning assault weapons, we can increase the age limit, we can ban bump stocks and we can certainly limit access to high capacity magazines,” Brown said.

At Fort Vancouver High, students held signs with photos and quotes of the victims.

17 students at Roosevelt High hold unlit candles, one for each death at the Florida High school. pic.twitter.com/4lxeYY6A4N

Braving snow in New England and threats of school discipline in places like Georgia and Ohio, they carried signs, chanted slogans against the NRA and bowed their heads in tribute to the 17 dead in the Feb. 14 shooting at Marjory Stoneman Douglas High School in Parkland, Florida.

In joining the protests, the students followed the example set by many of the survivors of the Florida shooting, who have become activists on gun control, leading rallies and lobbying legislators.

Student walk out of classes as part of a national demonstration for increased gun laws and school safety at Whiteaker Middle School on Keizer. #StudentWalkOut #WalkOut @Salem_Statesman pic.twitter.com/7sODjgcUTi

In Washington D.C., more than 2,000 high-school age protesters observed the 17 minutes of silence by sitting on the ground with their backs turned to the White House as a church bell tolled. President Donald Trump was in Los Angeles at the time.

About 10 students left Ohio’s West Liberty-Salem High School — which witnessed a shooting last year — despite a warning they could face detention or more serious discipline.

Police in the Atlanta suburb of Marietta patrolled Kell High, where students were threatened with unspecified consequences if they participated. Three students walked out anyway.

She remembers her school going into lockdown last November when police found graffiti on a Keizer garage, threatening a school shooting at McKay High School in Salem.

"It was scary," said the McNary junior, who hid in a classroom corner with her peers during the lockdown. "That's not a fear you should have."

"I don't want kids to have that fear in the future," she said, "and that's not a fear people have in other countries with better gun laws."

Danner said she's heard from a lot of students who are also interested in participating in the national "March for Our Lives" protests on March 24.

Mayor Wheeler said he supports the student demonstrations in an open letter to students published on his website.

"My daughter was in kindergarten the same year as the shooting at Sandy Hook," Wheeler wrote. "Now that she is 11, she will be looking to you as leaders and role models. It is you, students, who are leading the way to real national change. I applaud you."

Wheeler recessed Wednesday's City Council meeting for 17 minutes to support the efforts of the demonstrating students.

"We're the ones affected," she said, "and we're speaking out before others can speak for us."