A GoFundMe to cover the rogue lawmakers' expenses and fines has raised nearly $30,000 as of Friday afternoon. 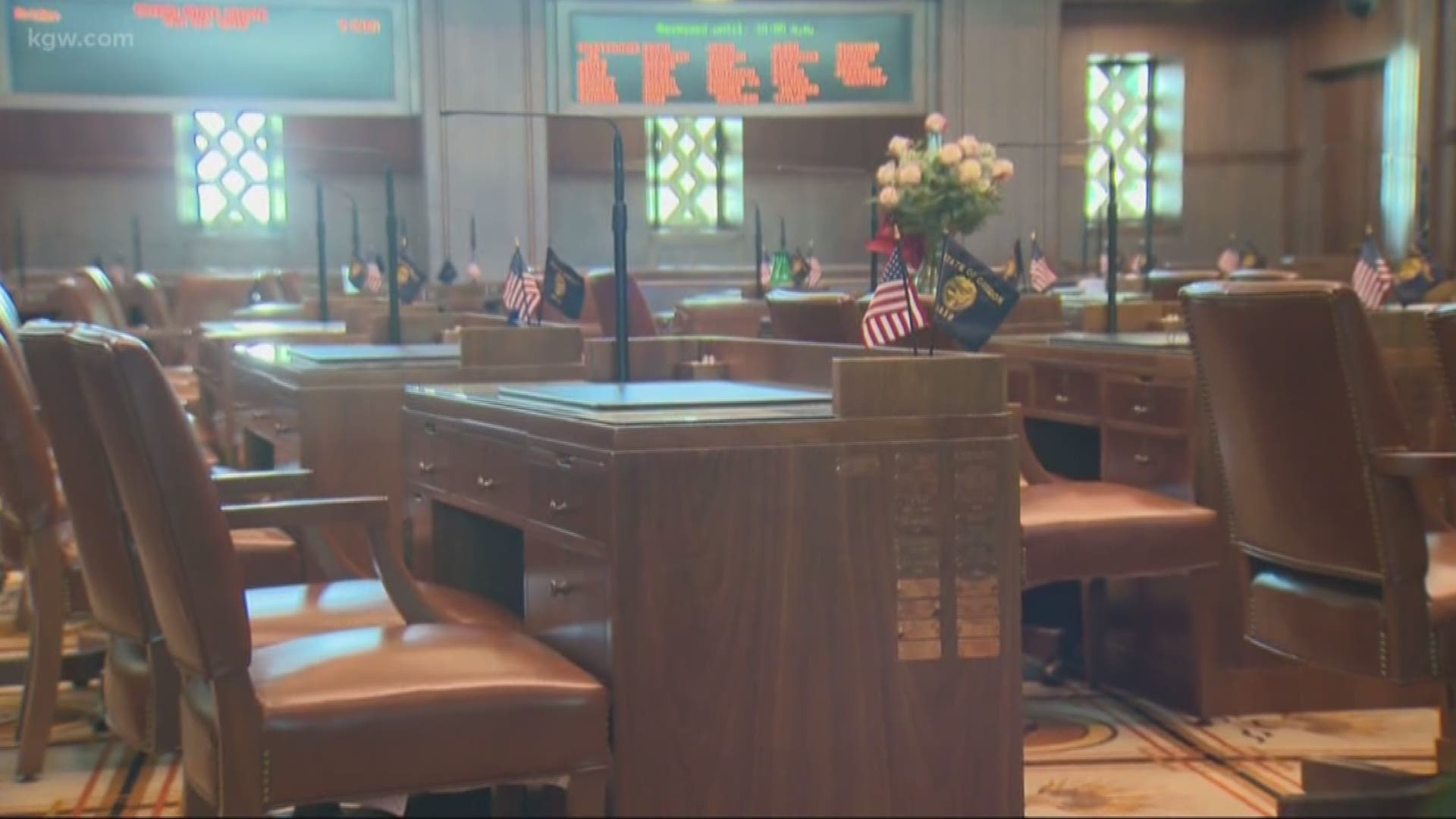 SALEM, Ore. — Republican state senators in Oregon continued to engage in a high-stakes game of brinksmanship Friday with Democratic lawmakers, saying they are prepared to sue if the Senate president goes through with a threat to impose a $500 fine for each day they delay a vote on a landmark climate plan.

"We will file legal action," said Sen. Tim Knopp, a Republican from Bend who has said he has been in three states in the past three days. "If they were trying to bring us back, threatening to arrest us and impose fines isn't going to work."

Senate Majority Leader Ginny Burdick pushed back, saying Republicans have no legal course as the fine is explicitly written in statute.

Oregon Gov. Kate Brown deployed the state police Thursday to try to round up 11 Republican senators who fled the Legislature — and in some cases, the state — to thwart the passage of a cap-and-trade proposal that would dramatically lower greenhouse gas emissions by 2050. The minority GOP caucus wants the plan to be sent to voters instead of being instituted by lawmakers — but negotiations with Democrats collapsed, leading to the headline-grabbing walkout.

But none of the GOP senators appeared Friday. A GoFundMe to cover the rogue lawmakers' expenses and fines has raised nearly $30,000 as of Friday afternoon.

State Police can force any senators they track down in Oregon into a patrol car to return them to the Capitol, although the agency said in a statement that it would use "polite communication" and patience to bring the rogue lawmakers back. Knopp confirmed that he was contacted by the state police, but he said he declined the superintendent's request to return back to the statehouse.

The GOP senators will be fined $500 a day per person if enough of them remain absent to prevent a vote. Democrats have an 18 to 12 majority in the chamber, but need 20 members present for a quorum. One GOP senator recently died and has not yet been replaced.

The state police don't have jurisdiction outside Oregon. But the Oregon State Police confirmed Thursday evening it was working with out of state agencies to track the Republicans down.

Under the proposed cap-and-trade bill, Oregon would put an overall limit on greenhouse gas emissions and auction off pollution "allowances" for each ton of carbon industries plan to emit. The legislation would lower that cap over time to encourage businesses to move away from fossil fuels: The state would reduce emissions to 45% below 1990 levels by 2035 and 80% below 1990 levels by 2050.

Those opposed to the cap-and-trade plan say it would exacerbate a growing divide between the liberal, urban parts of the state and the rural areas. The plan would increase the cost of fuel, damaging small business, truckers and the logging industry, they say.

Watch: What is cap and trade?

California has had for a decade an economy-wide cap and trade policy like the one Oregon is considering. Nine northeastern states have more limited cap-and-trade programs that target only the power sector.

Republicans aren't just holding up a climate plan, but a significant portion of the state budget including funding for the state's health care, foster care and higher education agencies.

"If we don't get that passed, we're going to see some real disruption in the services that people depend on," said Senate Majority Leader Ginny Burdick, D-Portland.

The Legislature this week approved a continuing resolution to prevent those agencies from shutting down, funding them at current service levels in the event a budget isn't approved by June 30, the constitutional end of session.

Knopp said Republicans would be willing to return to the statehouse to solely vote on budget bills.

"We would come back if that's what Democrats want to vote on," he said. "At this time, that hasn't been offered. As far as I'm concerned, the Democrats are responsible for this impasse."

MORE: What's next with walkout?

Burdick said it's not Republicans' "job to dictate what we can pass and what we can't pass."

"They're responsible for being here," she said.

The walkout also puts other major Democratic priorities on hold, including affordable housing, tobacco taxes and paid family leave. Legislation addressing these topics sailed through the House Thursday, but their fate remains uncertain with the Senate shutdown.

This is the second time in this legislative session that minority GOP lawmakers have used a walkout as a way to slow the process. Democrats have a rare supermajority in the House and Senate, meaning Republicans don't have many ways to influence the debate.

Republicans walked out of the Senate last month to block a school funding tax package. The standoff lasted four days, until the governor struck a deal to table legislation on gun control and vaccine requirements.