Officials across Oregon denounced the presence of federal troops in Portland as officers in unmarked vehicles are taking protesters off the streets. 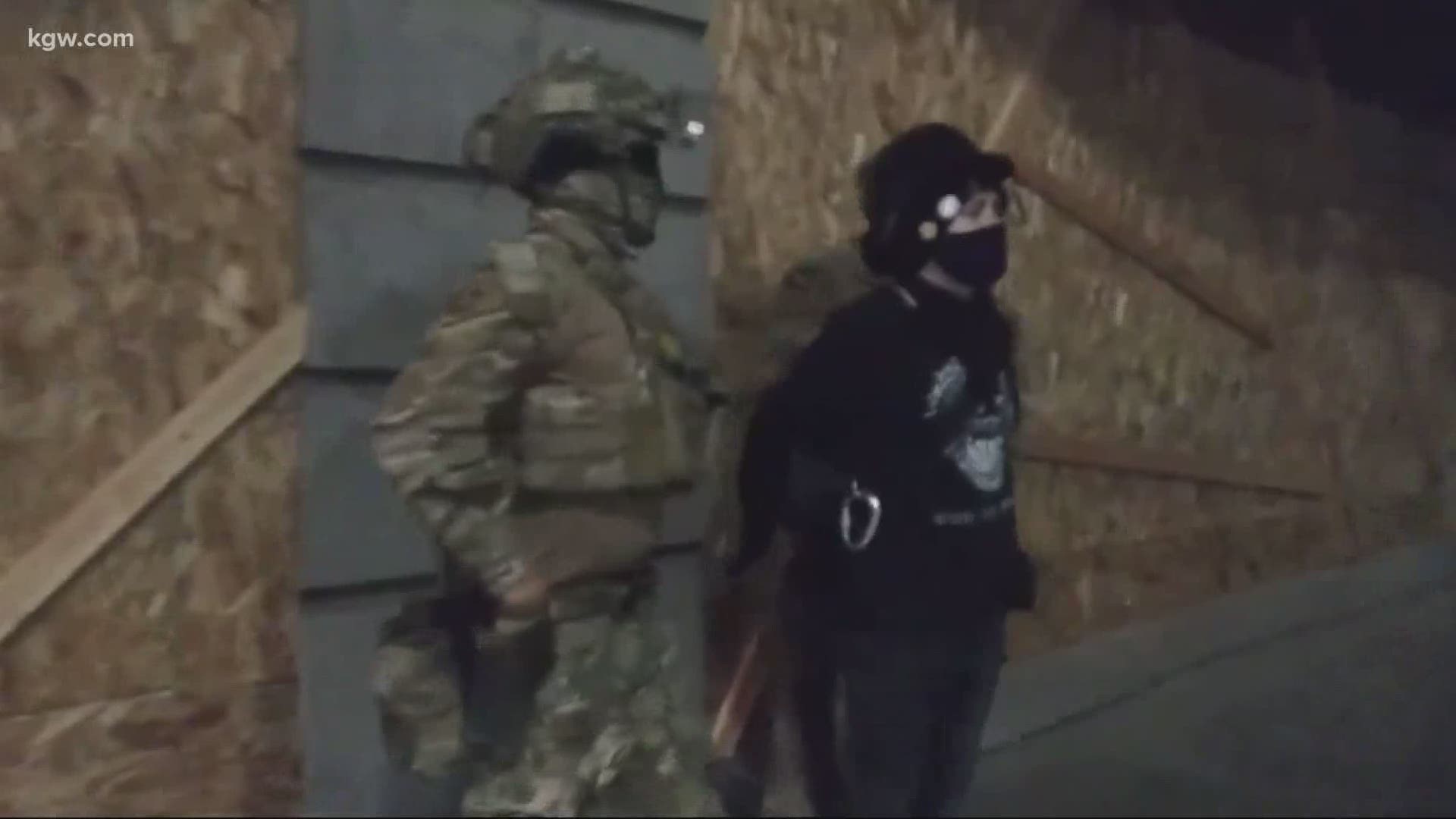 PORTLAND, Ore. — After more than a month and a half of nightly clashes between protesters and Portland police, the last week of which has included the chaotic injection of dozens of federal officers, city, state and federal leaders are demanding President Trump pull those officers out of the city.

Federal agents in green camouflage uniforms have been taking people into custody on the streets of Portland, and not on the federal property that they were sent to protect.

Acting Secretary Chad Wolf has visited Portland and has been posting to Twitter calling protesters "extremists" and "violent anarchists," saying "We will prevail."

The ACLU of Oregon says this should concern everyone in the United States.

Gov. Kate Brown said President Donald Trump, who deployed Department of Homeland Security officers to Portland, is looking for a confrontation in the hopes of winning political points elsewhere.

People across the country are responding to the occupation of Portland by federal officers, and congressional leaders are demanding independent investigations into the “violent acts” of some of those officers.

In statements released Friday, the lawmakers said that the request for investigations came after federal agents shot a peaceful protester in the head, causing serious injury and hospitalization. It also follows reports and video recordings of unmarked federal agents grabbing protesters from the streets and taking them to unmarked minivans.

“DHS and DOJ are engaged in acts that are horrific and outrageous in our constitutional democratic republic,” Merkley said. “First, they are deploying paramilitary forces with no identification indicating who they are or who they work for. Second, these agents are snatching people off the street with no underlying justification. Both of these acts are profound offenses against Americans. We demand not only that these acts end, but also that they remove their forces immediately from our state. Given the egregious nature of the violations against Oregonians, we are demanding full investigations by the inspectors general of these departments.”

“Oregonians’ demand for answers about this occupying army and its paramilitary assaults in Portland at the direction of Donald Trump and Chad Wolf cannot be stonewalled,” Wyden said. “That’s not how it works in a democracy. It’s painfully clear this administration is focused purely on escalating violence without answering my repeated requests for why this expeditionary force is in Portland and under what constitutional authority. Simply put, the Office of Inspector General must investigate Trump’s assault on Americans’ constitutional rights now.”

I am working with both the OR Congressional Delegation and the House Judiciary Committee to not only demand answers but to make sure this stops IMMEDIATELY. https://t.co/zh0kISAhcf

“The overly aggressive conduct of federal officers in Portland is alarming and unconstitutional. Oregonians must be able to exercise their First Amendment rights safely, without being picked up and detained by unidentified federal officers,” Bonamici said. “The president is intentionally provoking unrest and discord, and our community will not stand for it. He purports to be a law and order President, but his administration’s actions are political bluster and are making our city and our country less safe. We will not rest until we get answers on behalf of Oregonians.”

Gov. Kate Brown said that the president is failing to lead the nation and that sending federal troops to Portland was a blatant abuse of power.

“It’s all about scoring political points and of course a photo opportunity,” she said.

When asked about a plan to get the violence, which has caused millions of dollars in damage, under control, the governor said she was “aware of plans” but added none of them involved deploying extra law enforcement.

“My experience in terms of dealing with these types of situations is that adding military force or adding troops only escalates [the violence],” she said. “I think the direction we need to go in is to deescalate and dialogue.”

Mayor Ted Wheeler called the federal occupancy an attack on our democracy.

Mr. President, this is an attack on our democracy.https://t.co/KGGBTI49eu

Friday Mayor Wheeler accused the president of throwing his weight around to distract from “sagging” polling data during an election season.

“This is not political theater. We have federal officers on our streets further escalating tensions, causing harm to Portlanders,” the mayor said. “As a city, we're not able to hold [federal officers] to account, and that's highly problematic.”

Commissioner Jo Ann Hardesty has also been critical of federal troops in Portland. She held a candlelight vigil Friday night in support of protesters downtown.

I am proud to be among the loud chorus of elected officials calling for the federal troops in Portland’s streets to go home. Their presence here has escalated tensions and put countless Portlanders exercising their First Amendment Rights in greater danger. Thread/ pic.twitter.com/sVaDzh7z7b

What is happening now in Portland should concern everyone in the United States. Usually, when we see people in unmarked cars forcibly grab someone off the street we call it kidnapping. The actions of the militarized federal officers are flat-out unconstitutional and will not go unanswered.

The acting director of Customs and Border Protection, Mark Morgan, referred to Black Lives Matter protesters in Portland as ‘thugs.’ Protesters in Portland have been shot in the head, swept away in unmarked cars, and repeatedly tear gassed by uninvited and unwelcome federal agents. We won’t rest until they are gone.

The overarching goal of law enforcement is public protection and, during tense and dangerous situations, de-escalation. Federal law enforcement officers protecting the Mark O. Hatfield U.S. Courthouse and other federal buildings have been operating with those two critical goals. Night after night for the past 50 nights, they have protected the federal courthouse from incursion and fire. They have rebuffed efforts to enter the building by force and have been met with an onslaught of commercial fireworks, laser strikes, glass, mortars, paint, and anything else near at hand. They have endeavored to find the individuals within the crowd who are committing these violent acts and arrest them in a manner that is safe for both the officers and nearby non-violent protesters.

In limited instances, their conduct has been questioned and the Department of Justice Office of the Inspector General appropriately opened an investigation into the use of less lethal ammunition directed at a protestor last week.
Based on news accounts circulating that allege federal law enforcement detained two protestors without probable cause, I have requested the Department of Homeland Security Office of the Inspector General to open a separate investigation directed specifically at the actions of DHS personnel.
As U.S. Attorney, I will continue to work in concert with local and federal law enforcement and city and community leaders to bring about an end to this violence.

For its part U.S. Customs and Border Protection released the following statement:

While the U.S. Customs and Border Protection (CBP) respects every American’s right to protest peacefully, violence and civil unrest will not be tolerated.  Violent anarchists have organized events in Portland over the last several weeks with willful intent to damage and destroy federal property, as well as injure federal officers and agents. These criminal actions will not be tolerated.

CBP agents had information indicating the person in the video was suspected of assaults against federal agents or destruction of federal property.  Once CBP agents approached the suspect, a large and violent mob moved towards their location.  For everyone’s safety, CBP agents quickly moved the suspect to a safer location for further questioning.  The CBP agents identified themselves and were wearing CBP insignia during the encounter. The names of the agents were not displayed due to recent doxing incidents against law enforcement personnel who serve and protect our country.

The Department of Homeland Security (DHS) and its components will continue to work tirelessly to reestablish law and order.  The Federal Protective Service (FPS) is the lead government agency that CBP personnel are supporting.  CBP personnel have been deployed to Portland in direct support of the Presidential Executive Order and the newly established DHS Protecting American Communities Task Force (PACT).  CBP law enforcement personnel have been trained and cross designated under FPS legal authority 40 U.S.C. § 1315.

Our personnel are clearly marked as federal LEOs & have unique identifiers. You will not see names on their uniforms b/c these same violent criminals use this information to target them & their families, putting both at risk. As Acting Commissioner, I will not let that happen!