Much of it will go toward helping low- to moderate-income families find housing. A portion will also go toward preventing future disasters. 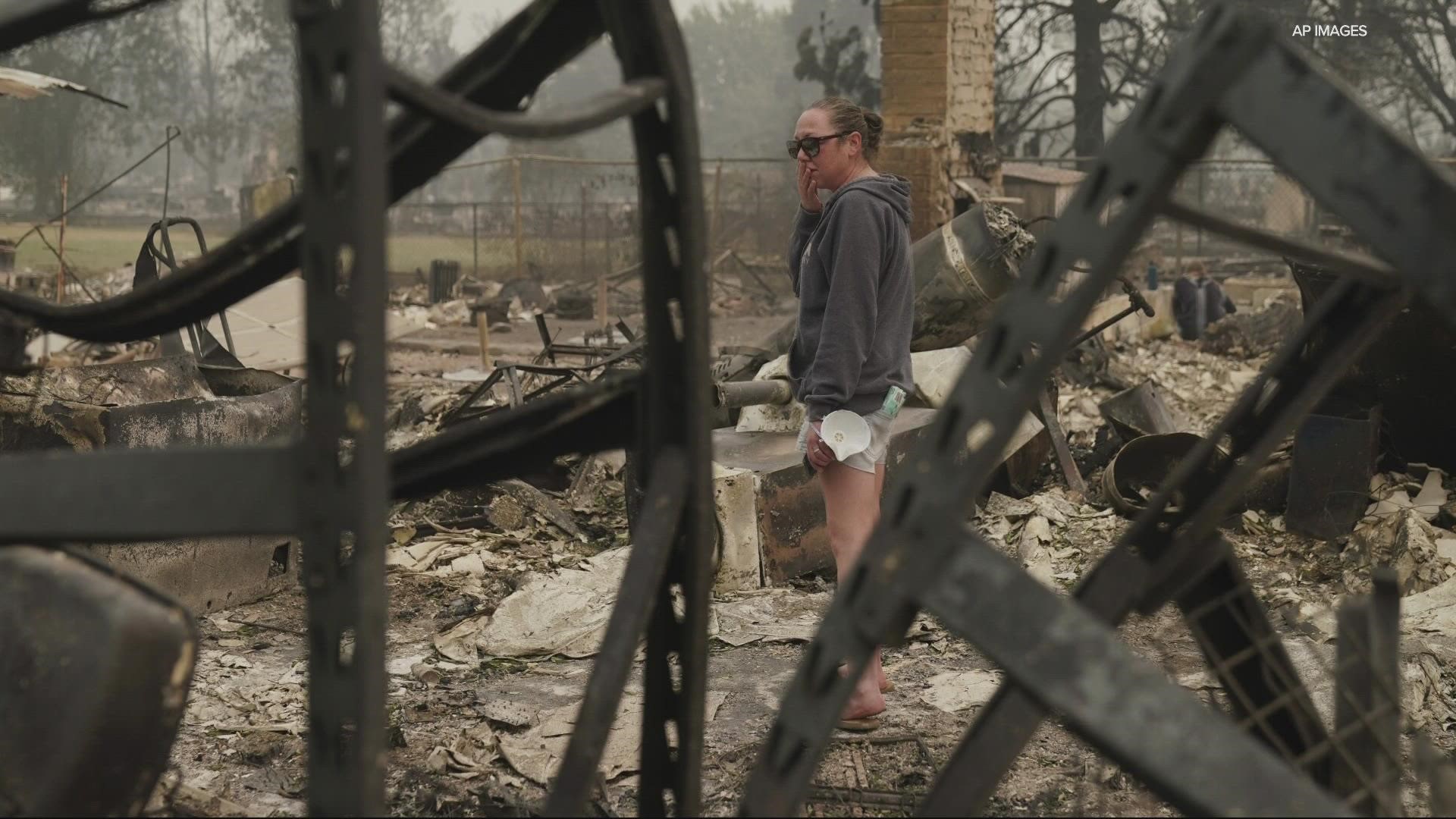 PORTLAND, Ore. — More than a year later, there are still many families recovering from the wildfires that tore through parts of Oregon in 2020. Now the federal government is giving the state more help for long term recovery.

The wildfires in 2020 were unprecedented. The Labor Day windstorm was a huge factor in the severity of the fires that burned across the state. More than 5,000 homes and businesses burned in eight counties across Oregon.

This week the U.S. Department of Housing and Urban Development (HUD) announced it was allocating more than $422 million to help with Oregon’s disaster recovery. Much of it will go toward helping low- to moderate-income families find housing. A portion of that will also go toward preventing future disasters.

People still trying to move forward hope this money helps them and the many others still struggling.

“I'm a single mom with four kids. So I’m a busy, busy bee,” said Hallie Weir as she spoke to KGW from her hotel room.

Weir and her four kids have lived out of a hotel since May. Before that, they were crashing at a friend's farm. The wildfire that burned through the Santiam Canyon in September of 2020 left her, her then-boyfriend and their kids without a home.

“I’ve been applying for FEMA since the beginning,” said Weir. “We filed multiple appeals and it's just a process. Every time you appeal, it takes them 30 to 60 days to look at your appeal and what you’ve uploaded. So it’s just a long drawn-out process.”

While it’s been exhausting, she’s received help from groups like the Santiam Integration Team to guide her through the complicated process. Up until a few weeks ago, she was also working two jobs in addition to caring for her kids. Now, she’s working toward finishing her associates degree and spending as much time with her kids as possible.

“We’ve just done a lot of family bonding,” said Weir. “I think that is the hardest part is not having a place that’s your home.”

RELATED: Bigger storms, fires due to changing climate will lead to more debris flows and slides

A closer look at the relief money

Frank McNally, the deputy director of the disaster recovery and special issues division of the office of community planning and development at HUD said the money is part of HUD’s Community Development Block Grant (CDBG) program. Unlike FEMA and SBA funding that is distributed in the immediate aftermath of a disaster, the CDBG disaster relief and mitigation funding is aimed at long-term recovery for communities.

“Any activity that is eligible under the Community Development Block Grant program is also an eligible use of our funds. And that would generally fall into the buckets of housing, infrastructure, and economic development and mitigation,” said McNally.

That means cities that need to replace infrastructure due to wildfires can use the money for those upgrades.

In Oregon's case, affordable housing for people whose homes burned remains an area of huge need and will likely be the first issue addressed with the funding.

"The beginning of a long and complex process"

“We are going to work really hard to meet all the federal requirements and try to use these funds as fast as we possibly can," said Delia Hernández, a public information officer for Oregon Housing and Community Services, the state agency that'll be in charge of distributing the money.

“It's still the beginning of a long and complex process. So, the state must still complete many tasks and these are tasks required by the federal government before it receives the money. And one of the tasks is we're going to develop an action plan that will identify how to use the funds,” said Hernández.

There will also be a period for public comment where people will be given an opportunity to weigh in on their needs.

“That's going to be one of the core factors on deciding how we use these funds,” Hernández said.

She said the state of Oregon has already given Oregon Housing Community Services $150 million to help with housing needs. Hernández said there was a ribbon cutting for the Gateway project in Southern Oregon last weekend. OHCS contributed $1.7 million to buy 53 large travel trailers for families with kids in the Phoenix-Talent School District.

She said the money from the federal government is expected to add to housing projects like Gateway. However, the process for Oregon to get the $422 million and distribute it will take time.

“I see it as a positive outlook, having money come. But you know, not knowing the timeline makes it really hard,” said Weir.

KGW brought Weir’s concerns about the long process to McNally.

“It's a widely shared criticism of the program that it takes too long,” McNally said.

He said that’s because HUD doesn’t have a permanent source of funding for this type of financial disaster recovery and mitigation help. Typically, Congress will appropriate funds after a disaster already happened. In Oregon’s case, the money was appropriated more than a year after the wildfires. McNally said if there was a standing source of funding HUD had access to, financial help could be given on a quicker timeline.

RELATED: After record fire season, Oregon researchers say wildfires will only get worse

In the end, while the money is expected to be a big help, it could be months before the paperwork is done and plans are finalized then put in motion.

McNally used Hurricane Sandy disaster funding as point of reference. He said it took about nine months for the process to be complete with grant money being distributed. However, that is one example. McNally said the process varies and can go quicker or slower depending on circumstances.

“We're all trying really hard to move forward […] and it's starting to feel like you know, one step forward, two steps back. I really hope that that money goes where it's supposed to because I know a lot of people that would benefit from it,” said Weir.

In total, $5 billion has been designated to help states recover from disasters in 2020 or 2021. So far, more than $2 billion of that has been allocated to nine states and Puerto Rico.

McNally said there's a formula used to calculate a state's level of need. The formula is designed to provide funding to the most impacted and distressed areas of the country. With the 2020 wildfires, this is the first time Oregon met the threshold to get this type of help.