Oregon U.S. senators Wyden and Merkley, and U.S. representatives Bonamici and Blumenauer condemned the officer’s tactics and escalation of violence in Portland. 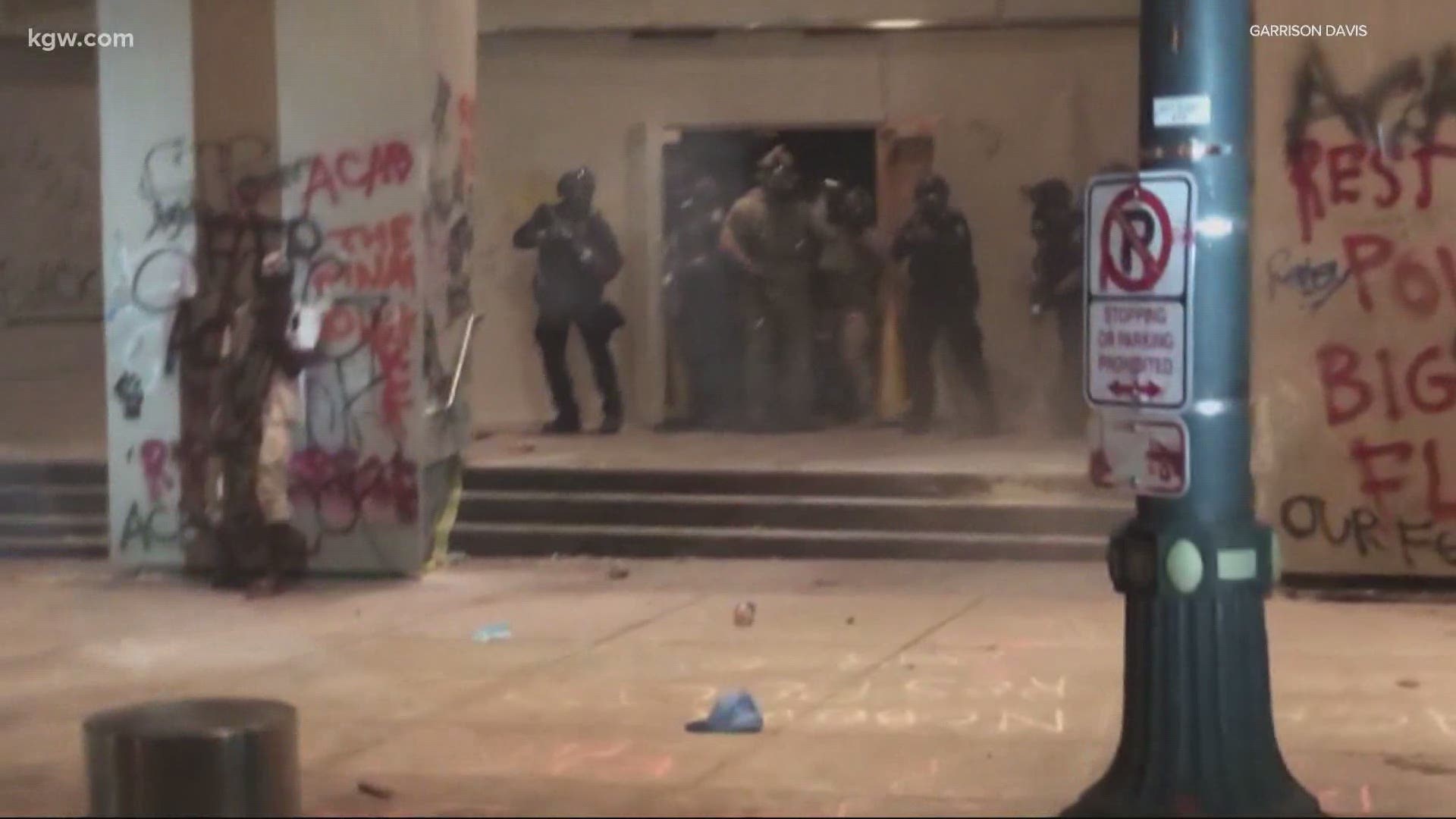 PORTLAND, Ore. — Oregon’s U.S. senators Ron Wyden and Jeff Merkley, along with U.S. representatives Earl Blumenauer and Suzanne Bonamici, sent a letter to the Trump administration Tuesday demanding answers after a federal officer shot and critically injured a protester with a crowd-control munition on Saturday night.

Donavan Labella, 26, took a less-lethal projectile to the head. He is still in a hospital after undergoing surgery, according to the letter from the democratic lawmakers.

Video on social media from Saturday night shows Labella kicking a smoke or tear gas canister away, then tossing it partway back toward the federal courthouse. Labella returned to his position across the street, where he lifted a speaker box above his head. That's when he was hit by the device and dropped to the ground.

“In recent weeks, the federal government has deployed to Portland a number of DOJ and DHS officers. This politically driven federal response is intolerable,” the lawmakers said. “The apparent lack of operational coordination between agencies, departments, and offices, and the violence perpetrated by federal personnel is particularly concerning. Their presence and lack of coordination raises urgent concerns about how those engaging in illegal use of force against demonstrators will be held accountable.”

“I don't believe that President Trump ordering troops to the streets in Portland is the solution to the challenges we're facing and I would ask Portlanders to not take the bait,” Brown said.

President Trump on Monday lauded the actions of the federal officers.

“We've done a great job in Portland," Trump said. "Portland was out of control. They went in and I guess we have many people right now in jail. And we very much quelled it, and if it starts again, we'll quell it again very easily. It's not that hard if you know what you're doing."

Read the full letter from Wyden, Merkley, Bonamici and Blumenauer below.

We write concerning the role of, and recent actions by, Department of Justice (DOJ) and Department of Homeland Security (DHS) officers in Oregon responding to local demonstrators. We are deeply concerned by these officers’ presence and actions and the seeming lack of on-the-ground coordination between agencies and departments.

In recent weeks, the federal government has deployed to Portland a number of DOJ and DHS officers. This politically driven federal response is intolerable. The apparent lack of operational coordination between agencies, departments, and offices, and the violence perpetrated by federal personnel is particularly concerning. Their presence and lack of coordination raises urgent concerns about how those engaging in illegal use of force against demonstrators will be held accountable.

On Saturday, July 11, 2020, a federal agent, whom we understand to be a member of the DOJ U.S. Marshal Service Special Operations Group (SOG), deployed at the Hatfield Federal Courthouse in Portland, Oregon, fired a potentially deadly crowd-control munition in apparent violation of commonly employed training tactics that direct officers to aim below the head and face area. An Oregonian suffered a resulting critical head injury and since undergoing surgery is now hospitalized. This use of force appeared, from recorded accounts, to be an unnecessary escalation on the part of federal agents.

We are further concerned that this SOG may be taking direction from leaders outside of Oregon. The U.S. Marshal Service website describes SOG as “…a self-supporting response team capable of responding to emergencies anywhere in the United States or its territories. … The SOG also maintains a small, full-time operational cadre stationed at the Marshals Service Tactical Operations Center at Camp Beauregard, LA.”

We unequivocally condemn such acts of violence and any effort to target, attack, or silence those peacefully exercising their First Amendment rights. To help us understand how such an incident could occur and how federal agencies are communicating with each other and local authorities, please respond to the following questions no later than July 21, 2020:

We look forward to your prompt response.