Roughly 50 people marched down Southeast Taylor Street late Saturday morning carrying a large paper tube with the words “Tank of Doom” painted on the side. 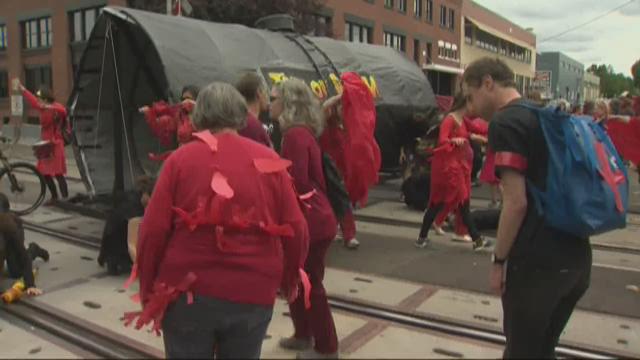 When they reached a set of railroad tracks one block east of Water Avenue, they set the Tank down and began. Those wearing black shirts fell to the ground and made gargling sounds, as if they were spilling out of the tank. Those wearing red danced around them, waving scarves and yelling “Burn! Burn!”

In their minds, the message was clear. Oil trains breed disaster, and performances gain attention.

“We want to do it in a way that doesn't make them feel hopeless,” said Anais Tuepker, a 350PDX volunteer.

Many of the demonstrators on hand Saturday belong to or sympathize with 350PDX, the local chapter of a global environmental rights group.

All of them still have fiery images seared into their brains of last month’s oil train crash near Mosier, which caused a massive fire and spilled an estimated 40,000 gallons of fuel in the Columbia River Gorge.

“We're just trying to be out and visible and bring it to everyone's attention,” said Tuepker

Federal investigators have since blamed Union Pacific Railroad for the wreck, saying the company failed to maintain its track and missed problems during recent inspections. Union Pacific has since promised to increase inspections.

That wasn’t enough for the dozens marching through Southeast Portland Saturday, who did their best to recreate the disaster with artistic flair.

“We really can take action as people," said Tuepker. “We can let governments know…we want to move away from the oil trains. We don't want this in our communities.”