Crews work to clean up oil sheen near Astoria

The Coast Guard says contract crews are working to pull up an old 20-foot-long tank that may be the potential source of an oil sheen on the Columbia River near Astoria. 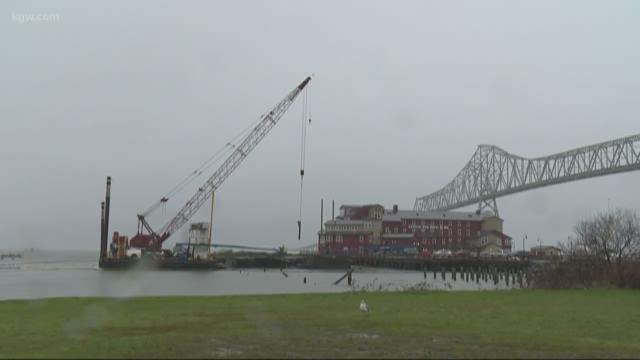 ASTORIA, Ore. — The Coast Guard says contract crews are working to clean up the oil sheen on the Columbia River near Astoria.

Eleven days after the oil spill was reported, there's still lots of work to be done.

Over the weekend, a crane and other equipment were brought in to get to the tank officials believe is responsible for the spill. They said the tank is left over from when a seafood cannery operated in the early to mid-1900s.

“We wanted to make sure divers were safe and that's why the crane was important, so we could remove that concrete, remove the wood so we can get to that tank,” said Petty Officer 1st Class Levi Read with the Coast Guard.

Coast Guard officials said the tank in question could hold up to 10,000 gallons maximum, but more likely is holding 2,000 or so gallons. There are also other concerns.

“As we get into the pier, there's always that possibility that there may be more tanks that we are unaware of,” said Read.

Initially the oil spread about five miles. Now it's mainly contained to the pier.

Crews have collected about 1,500 gallons of oily water and debris so far. That's worrisome to people who live in Astoria.

“I think a lot of it is just concern about the water. People have been a little worrisome,” said Neva.

What the spill will mean for the environment was also a big question for Samuel Mcdaniel, who is studying environmental science.

“Mostly just concerned about the biodiversity, the birds,” he said as he watched crews working.

Read said they've had experts weigh in and have received no reports of wildlife being affected.

Read said there's no specific timeline, but the oil spill could potentially take weeks to fully clean up.

He said there are a lot of factors that could delay the process, like the tide or weather.