Jason Washington, 45, was shot June 29 while witnesses said he was trying to break up a fight on the PSU campus. 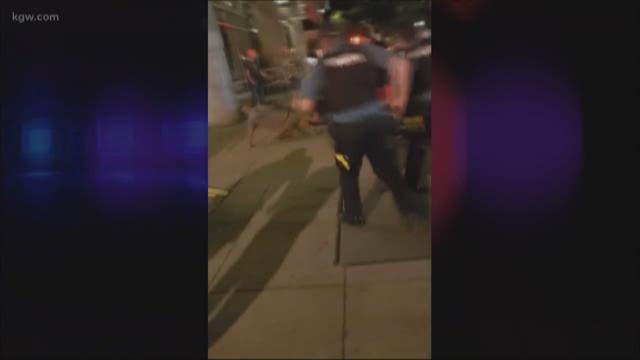 PORTLAND, Ore. — A Multnomah County grand jury determined that two Portland State University public safety officers were justified when they shot and killed a man on campus in June. The officers will not face criminal charges.

Jason Washington, 45, was shot June 29 while witnesses said he was trying to break up a fight near the intersection of Southwest Broadway and College Street. Washington, who had a concealed carry permit, was carrying a gun at the time and his weapon fell from its holster, landing on the ground. When he reached to pick it up, the officers shot him, witnesses said.

The grand jury, after hearing testimony in a two-day hearing, determined officers James Dewey and Shawn McKenzie acted in self-defense or in the defense of other people when they shot Washington.

“Although my family and I are disappointed the PSU officers will not face criminal charges, we appreciate the hard work of those serving on the grand jury. I will be looking to my attorney, Christopher Larsen, to guide us through the next steps in this process. We want those responsible for the death of my husband to be held accountable. We will always remember and love Jason and know he was needlessly killed while attempting to keep the peace,” Michelle Washington said in a statement after the grand jury's decision was announced.

Washington’s family previously called for the firing of the two officers. His brother, Andre Washington, said in July that PSU should disarm its officers.

“Black men being gunned down by white police officers is an affliction in America,” Andre Washington said. “When these officers approached Jason Washington they did not follow protocol and panicked. These two officers shot and fatally wounded Jason Washington, the only person trying to keep the peace.”

Jason Washington was a military veteran, a local postal worker, a husband, father and grandfather.

“I think he would be in shock that this would be something that would possibly happen to him because he was such a believer in the law and police and his rights," Michelle Washington said in August. "And he'd be in shock, we're all in shock because this is the last person in a million years I would think this would happen to."

In a series of tweets, the PSU Student Union said Washington was a victim of racial profiling and called on the university to disarm its police officers.

It is evident to us he was a victim of racial profiling from PSU police. This is why we do not, and have never wanted armed police officers on PSU’s campus. Please join us to fight for justice for Jason on September 24th in the PSU Park Blocks for a rally and march.

Portland State University President Rahmat Shoureshi said the school will move forward with investigations of the shooting and campus security.

Today’s no-indictment decision by the Multnomah County Grand Jury closes the Portland Police Bureau’s investigation of the June 29 fatal officer-involved shooting on our campus. However, Mr. Jason Washington’s death continues to weigh heavily on my mind, as does the safety of our students, staff and faculty.

Mr. Washington’s death has deeply shaken all those involved as well as the greater campus community, and we are determined to learn from it.

With completion of the Portland Police Bureau investigation, we are now moving forward with separate reviews of the shooting and campus security by independent experts. The security review will result in recommendations to enhance safety policies and procedures, including the issues around an armed campus police force.

The review process will be transparent. A 15-member oversight committee of students, faculty, staff and members of the greater Portland community has advised me in choosing the outside consulting firm that PSU is engaging for this work.

One independent review will conduct a thorough examination of the shooting, including all the information from the Portland Police Bureau investigation that was presented to the grand jury.

A separate broader review will serve as a road map for updating and modifying campus safety policies and procedures, such as Campus Public Safety Office staffing and resources, officer training, and our relationship with local law enforcement, considering what may have changed over time since PSU’s trustees approved a sworn, armed police force in December 2014.

I have selected the nationally recognized consulting firm Margolis Healy to do this work. I made the selection after we posted a publicRequest for Qualifications seeking consultants with experience and expertise in campus safety. The oversight committee reviewed six firms and unanimously recommended Margolis Healy. The committee will work with Margolis Healy and provide a review of the safety report once it is completed. The report and recommendations will be public once it is submitted to our Board of Trustees.

The committee also recommended that PSU engage a separate firm to examine the shooting incident, and I have chosen the OIRGroup based on the committee recommendation and my conversation with this firm. OIR is a national expert in independent police oversight and review.

Both of these firms are highly qualified with years of experience in this area. We are confident that their independence and expertise will lead to recommendations that will help guide our decisions on campus safety and security.

In the past weeks, I have read all the letters, messages, emails and comments from faculty, students, staff and community members. Thank you. All those will be forwarded to Margolis Healy. At its next meeting Oct. 4, the PSU Board of Trustees will discuss our response, and there will be an opportunity to comment at that meeting. In addition, Margolis Healy will hold a series of campus and public forums this fall as part of its review, and details will be announced soon.

Our goal is to move as rapidly as possible without compromising opportunities for fact finding, campus input and evidence-based outcomes. I believe these two rigorous independent reviews are the best way to achieve this.

In closing, I know that today’s decision will rekindle the pain and sadness from the loss of Mr. Washington, and our thoughts are with his family and friends. Recent weeks also have been difficult for all of our CPSO officers. The Office of the Dean of Student Life and Center for Student Health and Counseling (SHAC) and Human Resources offer support and resources for students, faculty and staff.

My hope is that our actions following this tragedy will help make our campus and community a safer place for years to come.