A mostly peaceful protest outside a sheriff's office in Portland's Laurelhurst was declared a riot at midnight. Things only escalated from there. 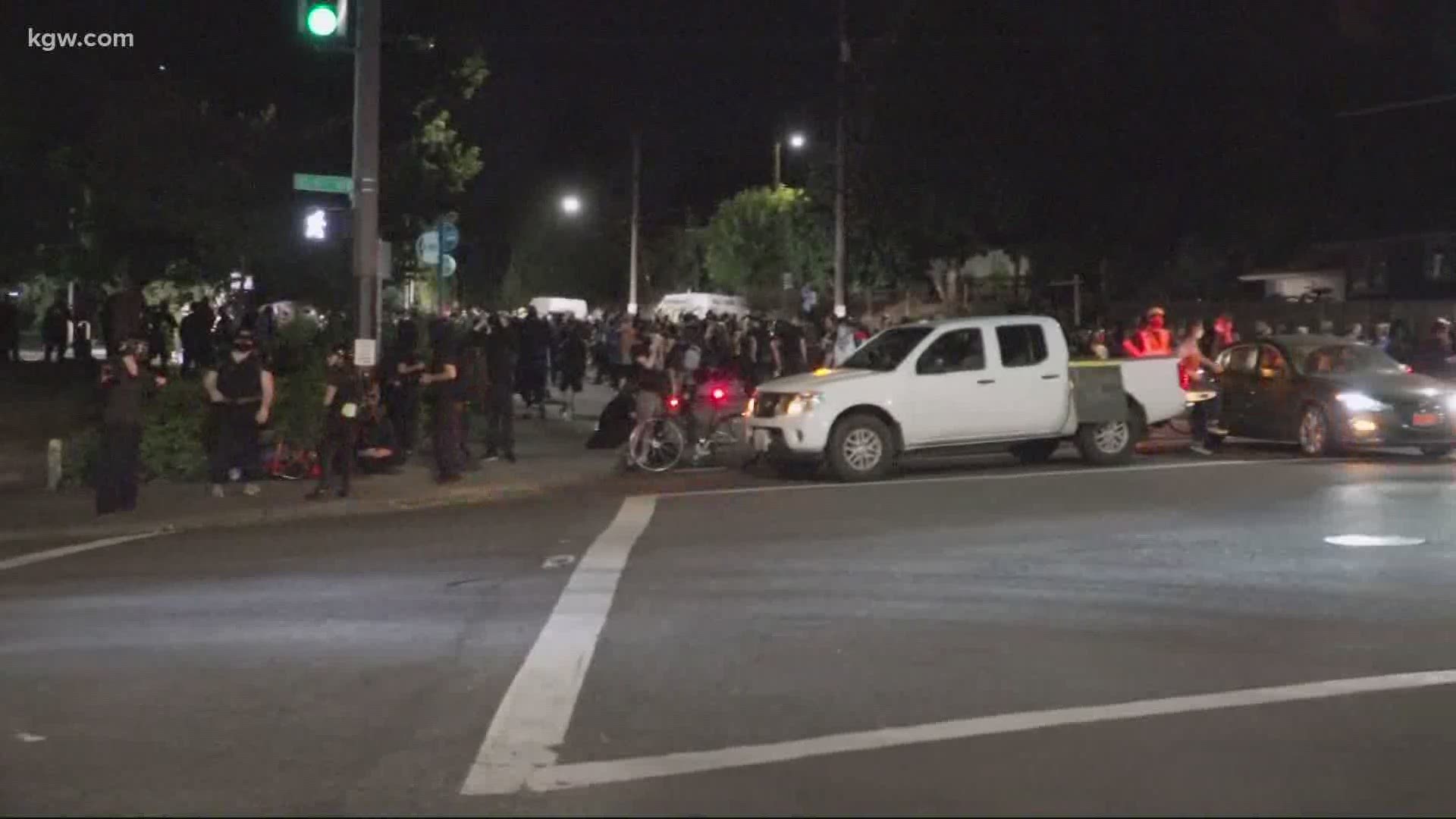 PORTLAND, Ore. — The 80th night of protests in Portland against systemic racism and police brutality started with a peaceful march through the Laurelhurst neighborhood. Hours later as tensions ramped up, police declared a riot, ordered the group of an estimated 300 people to disperse and started clashing with protesters in the streets.

In one dramatic incident, police in tactical gear could be seen rushing into a crowd that was holding up shields, swinging at protesters.

The night started peacefully enough around 8 p.m. at Laurelhurst Park for a "Direct Action March." The group grew as it reached the Multnomah County Sheriff's Office at E. Burnside Street and NE 4th Avenue by 9:30 p.m.

"No cops. No KKK. No fascist USA," the group chanted as it arrived. Many were dressed in black. Some were holding large, yellow shields with the image of black fist indicative of the Black Lives Matter movement.

Talking through a loudspeaker, police on the scene warned protesters to not engage in violence, criminal activity or trespassing.

As the night progressed, a small group from the conservative "American Wolf" arrived, saying they were there to observe. Words between the two factions were traded and something was thrown at a limousine that had the word "wolf" written on the back window.

There were a couple of incidents of fireworks being set off outside the police building. At least one video posted on social media showed somebody spraying graffiti.

Outside of that, the protest was largely about chanting and singing. But at midnight, police declared the gathering a riot and ordered the group to leave. Smoke and tear gas were used to try dispersing the crowd, but eventually police in tactical gear came out to direct the protesters away toward the west.

Police use tear gas on protestors to being dispersal pic.twitter.com/XEs2fqoPKV

As it escalated, Olmos tweeted a video of police appearing to run at full speed into the crowd holding the shields and swinging at protesters.

As police continued to walk behind protesters, pushing them to keep moving, journalists at the scene also caught them puncturing the tires of vehicles supporting the group.

And police have now popped the trucks tires: pic.twitter.com/NecRtzQ8yV

Someone threw something through a patrol car window and shattered it, according to a tweet from Portland Mercury journalist Alex Zielinski.

By 2 a.m., the clash was over. With much of the crowd dispersed, police returned to the building, according to reports from the scene.

PPB said more than 60 calls for police service were holding around the city, during the protests, some for the entire length of the demonstration.

Police also said someone in a group of people wearing "press" identification threw a rock at officers that weighed nearly 10 lbs.

Far-right protesters were captured on video using paintball guns and mace. As a car was leaving a parking garage, shots were heard being fired. No one was injured and someone retrieved a casing from that incident.

Due to the violent clash with far-right protesters, media collective and public alert Twitter account DefendPDX suggested that protesters do not attend downtown protests and actions.

Though many demonstrations take place across the city, there are often protesters outside of the Justice Center at night, which is where the clash with far-right protesters occurred Saturday afternoon.