The four conservative members of the board voted, 4-3, to fire Superintendent Joe Morelock at the end of Tuesday night's school board meeting. 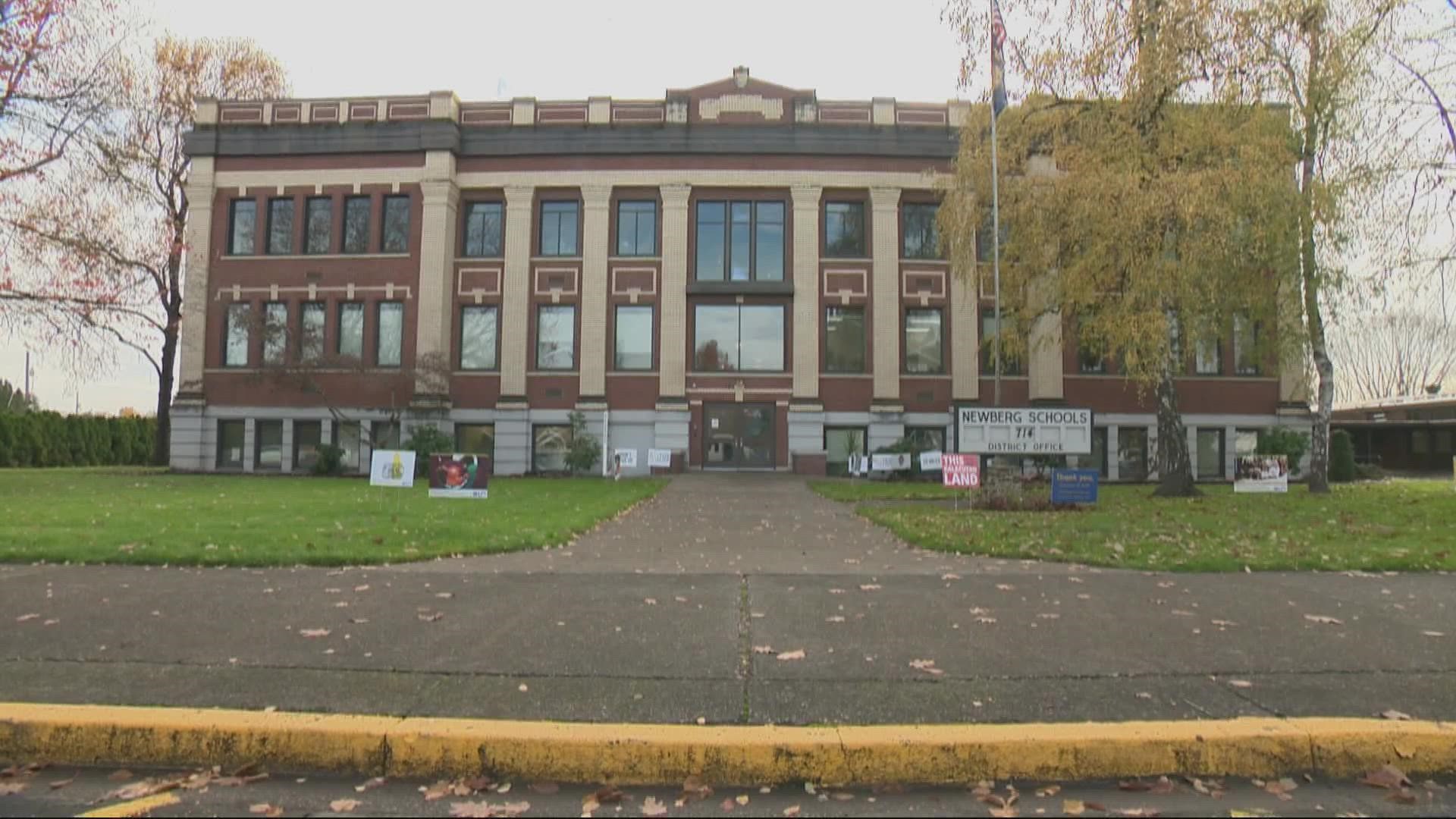 NEWBERG, Ore. — A bitterly divided Newberg school board, which has been enveloped in controversy for the past few months over its decision to pass a policy limiting the kinds of images or signs school employees can display on campus, voted to fire Superintendent Joe Morelock near the conclusion of a late-night board meeting Tuesday.

The vote came after a charged conversation in which three board members strongly objected to the resolution to fire Morelock.

The resolution outlining the no-cause firing was not included in the board packet for Tuesday's meeting. The board's four conservative members, David Brown, Brian Shannon, Renee Powell and Trevor DeHart, voted at the start of Tuesday's board meeting to add the resolution to the agenda.

At the end of the meeting, the resolution to fire Morelock passed, 4-3, with Brown, Shannon, Powell and DeHart voting in favor. After voicing strong objection to the move, the board's other three members, Rebecca Piros, Brandy Penner and Ines Peña, voted against.

"We will be paying for two superintendents," Penner said during the meeting.

The Oregonian confirmed that the district will pay Morelock $175,000 over the next 12 months, cover his health insurance and pay $5,000 into an annuity on his behalf. The Oregonian cited Morelock's contract, which the newspaper obtained through a public records request.

Before the resolution was brought forward, Penner, Piros and Pena attempted to stop it and adjourn the meeting. Penner and Piros said the packet outlining the resolution to fire Morelock was not provided to board members until the executive meeting, hours before the board meeting, and so there was insufficient time to review the motion. But the motion to adjourn the meeting was voted down, 4-3, with Brown, Shannon, Powell and DeHart voting to move forward.

Penner and Piros spoke out against the resolution and the board's four members who were in support of it. They expressed their support for Morelock, saying he guided the school district through a financial crisis and rebuilt relationships in the community.

Penner said the move to fire Morelock would have "rippling effects for months and years to come."

"And I doubt that all four of you will even be here when the rebuilding really starts to happen," she said. "This is going to set our district back decades. ... This has been the shadiest, shadiest process ever and unfortunately, it is our children who will have to pay for this. They will be losing resources out of their classrooms. And those are my kids. Those are my kids' classrooms that you are taking money from."

Following the vote, Piros spoke again, addressing the four board members who voted to fire Morelock.

"I protest that none of you had anything to say about why you wanted to do this, that the public is ... ," Piros said before she was interrupted by Brown.

Penner then asked Brown to adjourn the meeting, despite there being more items on the agenda, saying, "I don't think anything constructive will happen with this board again."

"Dr. Morelock, we know you and we trust you and this pains us terribly," she said. "Know that your integrity has spurred us to be faithful servers to our children and we wish you well. We're so sorry. We are very disappointed in this decision."

Morelock, who was silent up to that point during the discussion of the resolution, answered.

"Just remember that from the darkest dark comes the brightest light. Everything will work out eventually OK," he said.

"You're a bigger man than I am," Piros said and started to cry, as Penner put her hand over her mouth.

In a statement sent after the meeting, the Superintendent Cabinet of Newberg Public Schools said it is "shocked and dismayed that the Board would take this disruptive action in the middle of the school year."

Controversy over other decisions by Newberg school board

The policy limiting the kinds of images or signs school employees can display on campus originally began as a ban passed by the school board in August of LGBTQIA+ and Black Lives Matters flags. On Sept. 1, Morelock said during a board meeting that he wouldn't uphold the ban because he'd been advised by district lawyers that it was illegal.

In late September, the ban was amended following concerns about its legality after the ACLU threatened to sue the school board if it did not reconsider the policy. The amended policy remains as a ban on all political or quasi-political signs displayed by teachers.

Brown, Shannon, Powell and DeHart, the school board members who voted for the policy, were named in a lawsuit on Nov. 3 levied against the Newberg School District and the four board members by the Newberg Education Association. It argues that the policy violates the U.S. Constitution's First Amendment guaranteeing free speech and the 14th Amendment, which guarantees due process and equal protection under the law.

In the board packet for Tuesday's school board meeting, one agenda item was to address Morelock's response to a Newberg citizen's complaint about a sign in the window of a classroom at Dundee Elementary. The sign featured a rainbow, a heart, and the words "Be Known." Morelock determined it was a slogan for George Fox University and not a political symbol. The complainant appealed the decision. The board voted to table that item during Tuesday's meeting.

On Wednesday morning, KGW spoke to Heidi Pender, whose daughter is a freshman at Newberg High School. She said her family was heartbroken when they heard that Morelock had been fired. She said her daughter cried when she told her.

"That was her first reaction, grief," Pender said. She said her daughter, who is Black, asks almost every day about other options for her education.

"I feel like this is the nail in the coffin as far as her desire to stay and keep making change here," she said.

Pender said when Morelock was hired, she felt like there was hope for the first time that the school district was headed in a better direction.

"He made sure he was in schools every week with kids interacting," she said. "He had a very personal approach and didn't just sit in his office and make decisions arbitrarily. He looked in people's faces and knew what impact his decisions would have."

Pender said she doesn't know how the school district will handle the financial ramifications of the firing.

Reaction from educators, administrators and politicians

Late Tuesday night, the Newberg Education Association released a statement on the firing of Morelock:

During tonight’s school board meeting, the 4 board majority fired Superintendent Joe Morelock for no cause. Newberg educators support Dr. Morelock and the 3 board members who tried their best to stop this atrocity. Dr. Morelock has worked tirelessly on behalf of our students and staff. He has been key in the transformation of a struggling district. This move is yet another example of a board majority bringing instability to our schools. On behalf of Dr. Morelock and the work he has begun, we will continue to fight for safe, stable learning environments for our students.

A bilingual English and Spanish speaker, Dr. Morelock became Interim Superintendent for the 2018-2019 school year, with the district in significant financial difficulty after having to lay off staff. Facing an ending fund balance of less than $500,000 on a $51 million General Fund Budget, Dr. Morelock’s fiscal responsibility and his work to rebuild trust steadied the district. He was hired as the permanent Superintendent beginning with the 2019-2020 school year. Under his leadership, new contracts with our associations brought better pay to teachers and staff, more educational school days for our students, a stabilized financial situation with a safety net of over $9 million in the ending fund balance, and the passage of the largest Construction Bond in the history of Newberg Public Schools. Navigating a global pandemic with immense challenges, Dr. Morelock’s leadership has been demonstrated in the low turnover of building and district leadership, and the hiring of excellent new teachers and staff who more closely reflect our student body.

On Wednesday afternoon, U.S. Rep. Suzanne Bonamici, D-Oregon, who is the Chair of the Education and Labor Subcommittee on Civil Rights and Human Services, released the following statement about the firing of Morelock:

The action of the Newberg School Board in firing Superintendent Joe Morelock is wrong for students, wrong for educators, and wrong for the Newberg community. With their continued attack on symbols of support for Black Lives Matter and LGBTQ pride, the school board is on a dangerous and harmful path. Removing Superintendent Morelock from his post is part of a troubling national trend of extremist school boards ousting experienced, valuable school leaders, which is detrimental to the students they are supposed to serve. Unfortunately a few school board members are forcing through these inappropriate, and possibly illegal, changes, which will have long-lasting consequences and threaten student safety. I continue to stand with parents, students of color, LGBTQ students, and all members of the community who have courageously continued to speak out against the school board’s unacceptable actions.