'Never turn your back on the ocean': Woman recovering after being crushed by log

Heathyr Croasmun broke 13 ribs in multiple places and suffered bruising on her lungs, according to her husband Joe Croasmun. 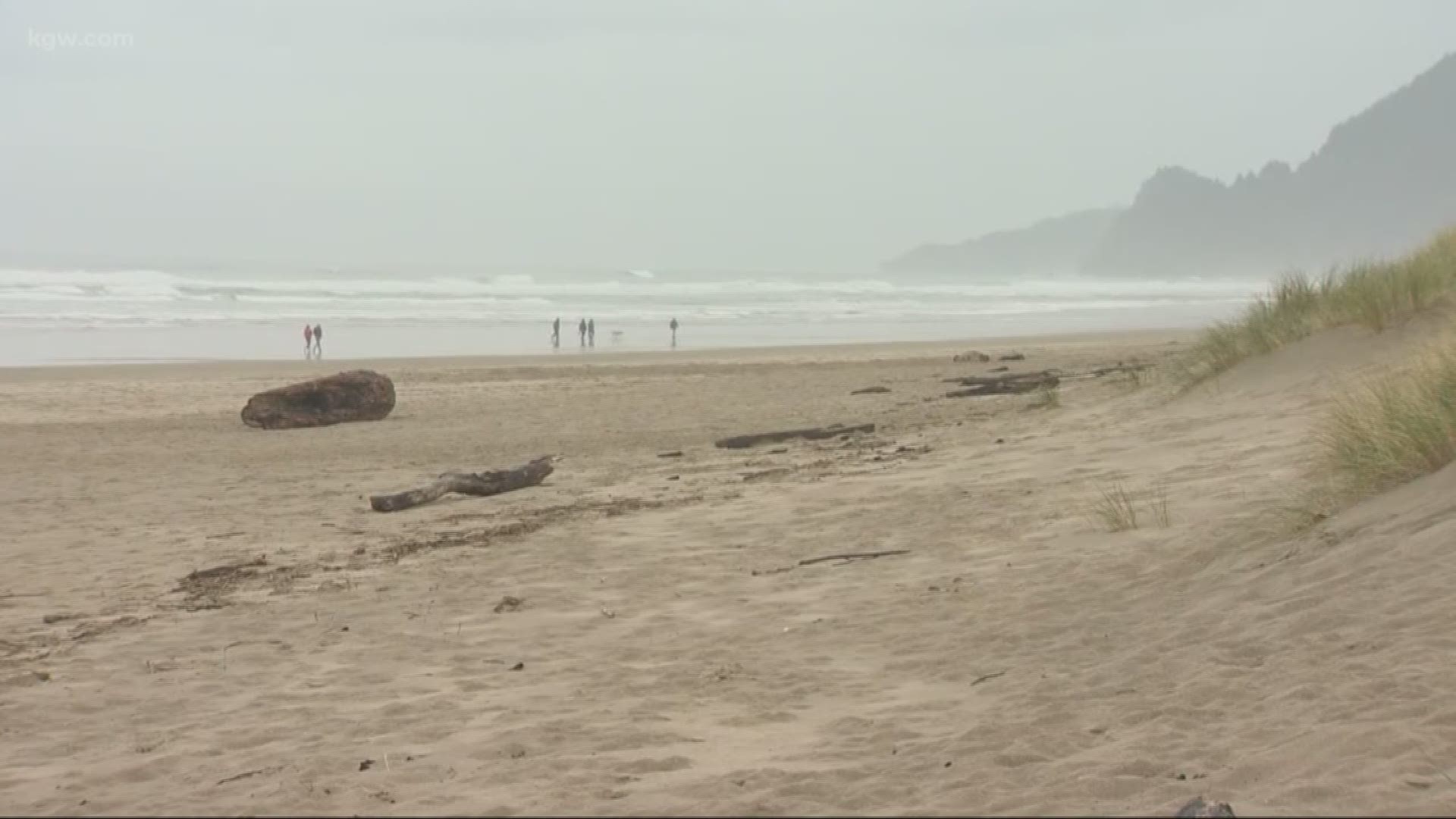 NEHALEM, Ore. — A woman is recovering in the intensive care unit Monday after being crushed by a log that was lifted by a sneaker wave at Manzanita Beach off Pelican Lane Saturday afternoon, according to Nehalem Fire and Rescue.

Heathyr Croasmun broke 13 ribs in multiple places and suffered bruising on her lungs, according to her husband Joe Croasmun.

The family took a photo a minute or two before the wave hit. It knocked Joe, his brother, and two kids over as well.

She was listed in fair condition Tuesday morning in Legacy Emanuel hospital.

The incident has emergency responders heeding a familiar warning: "Never turn your back on the ocean."

This spring break scare is not a rarity along Oregon’s coast, according to Nehalem Fire and Rescue Chief Perry Sherbaugh. He tells KGW that his department sees a log incident like this every few years and it can be deadly.

“You're talking about a several ton log rolling across you. It would be like rolling dough out on a table. Your body can't sustain that amount of weight,” Sherbaugh said.

The ocean is strong enough to pick up even the biggest log and toss in on top of a person. The log in Saturday’s incident was narrow at one end, but the other was estimated to be about four-feet in diameter, Sherbaugh said.

Some logs may look small, but even the tiny ones can be waterlogged and weigh tons, according to Oregon Parks and Recreation.

If you see a log along the surf or near the water, stay off it. Waves can come clear up onto the dry shoreline, according to Nehalem Fire and Rescue.

They are called sneaker waves because they appear without warning, often surging high up on the beach with deadly force and they are impossible to predict.

“At any time a larger wave could come in and knock you down. I've seen people get knocked down and swept out,” Sherbaugh said. “If you're anywhere near a log it only takes a few inches of water to cause that log to start moving and rolling about in the surf.”

Sherbaugh says he does not like the term “sneaker” because they are always a possibility. That is why he says you must always be watching the waves.

“Large waves come in periodically, but because people are on the beach and walking and seeing the normal activity they don’t think about the larger wave rolling in,” he said.

This accident is a reminder of Mother Nature’s sure force as many Portlanders hit the coast for spring break. While beach-goers are enjoying the breathtaking views of Oregon’s coast the power and potential danger of the waves are right alongside them.

Here are some other tips form Oregon Parks and Recreation to keep your spring break on the coast safe.

Rip currents are strong currents of water that rush out to sea. They are stronger than even the best swimmer. These currents can swiftly sweep unwary beachcombers and waders off their feet and out to sea. Rip currents may appear as dark, choppy water. Any time you see debris and foam floating out to sea, chances are you have found a rip current. Avoid the area.

How to play it safe: Parents keep your kids close when playing in the ocean. If caught in a rip current, don't panic. Swim parallel to the beach until you are out of the current, then head for the beach.

Incoming tides isolate rocks from headlands and the shore. Avoid the temptation of strolling out to an interesting rock without knowing when the tide rolls back in. Free tide tables are readily available at state park offices, information centers and many shops and motels.

How to play it safe: Stay off rocks and small, enclosed beaches. Know when the tide is coming in by visiting the tide table website at the Hatfield Marine Science Center.

High Waves Can Reach You:

Tides and waves can sweep over rocks, jetties and headlands, knocking you off and carrying you out to sea.

How to play it safe: Assume nothing is "high enough" and avoid exposed rocks, jetties and headlands during strong wave action (like during and after storms).

Assume that all cliff edges are unstable. Wet trails or soft sand and earth can make for unstable footing. Rocks can be slippery even when it isn’t raining.

How to play it safe: Make sure you wear proper footwear and stick to the trails. Stay behind guard fences and railings, and don´t get too close to the edge.

Standing at the base of an oceanside cliff can be dangerous, especially if it has an overhang. In some places, winter storms and high waves have eroded the shoreline, increasing the chance of collapse and slides.

How to play it safe: Beware of falling rocks, and don´t climb on bluffs and eroding hillsides. Don´t walk along the base of cliffs unless absolutely necessary.