Crews are making progress on Northeast Skidmore Street and 24th Ave, but their work is far from over. 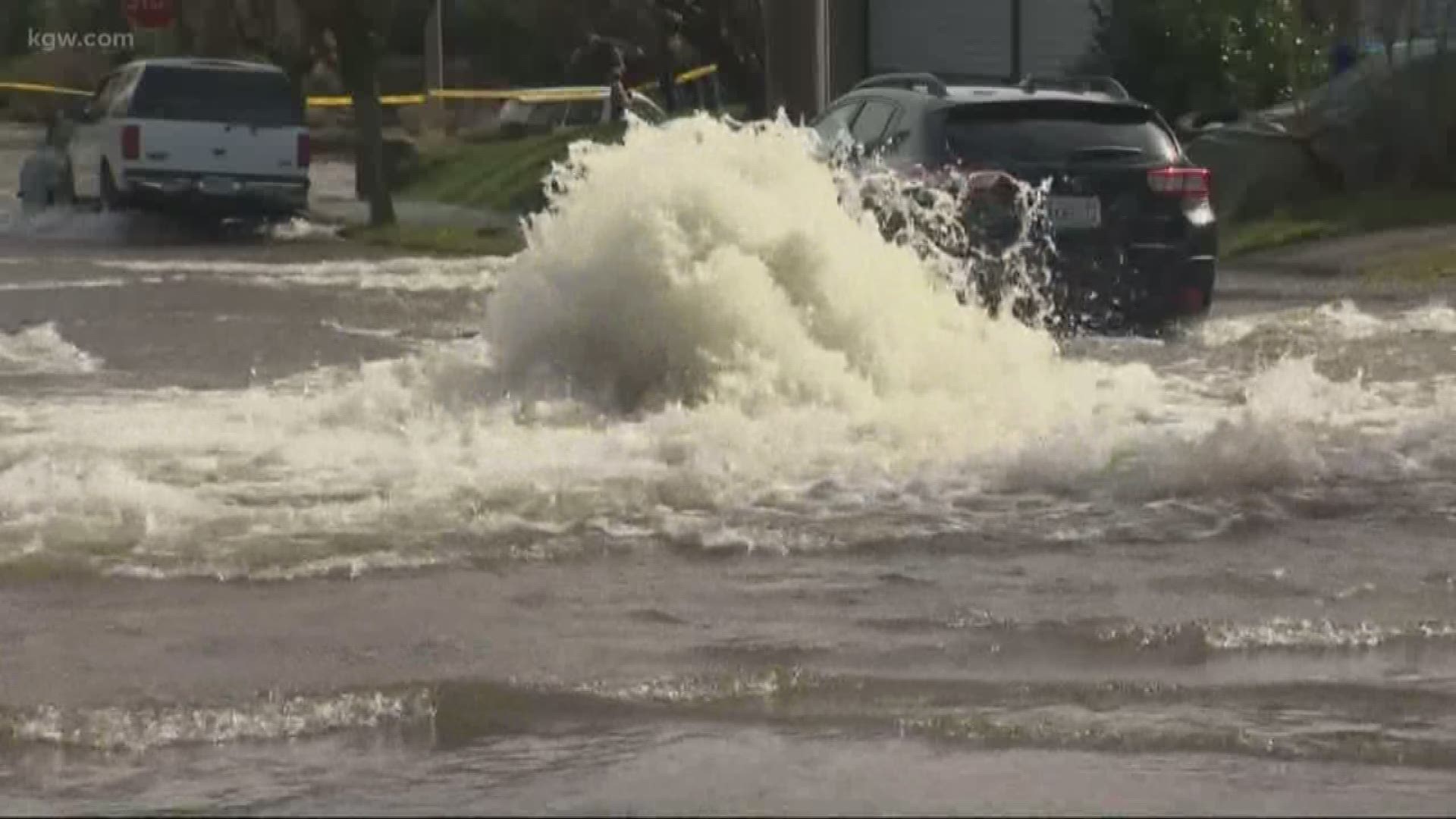 PORTLAND, Ore. — The 30-inch pipe that broke on Saturday, shooting off a geyser of water, has now been replaced. It was more than 100 years old.

Crews are making progress on Northeast Skidmore Street and 24th Ave, but their work is far from over. The Portland Water Bureau and Portland Bureau of Transportation will need about 1-2 weeks to excavate and rebuild the road. They’re asking travelers to avoid the area in the meantime.

On Monday the streets were dry, and thick dust settled in place of flowing water. By around 4 p.m., crews were done for the day after hauling off the burst pipe.

It was night and day Monday from this weekend’s scene.

“I got up to mow the lawn and so I got to the door said what is that roaring noise so I came out and it's one of those shocking, unbelievable things because it was like a geyser up there that changed to a water fall,” homeowner Margaret Kennedy said.

"It was pumping a million gallons a minute, they said. You're screwed. It was horrible,” long-time resident Brian Simmons told KGW.

Kennedy's landscape was submerged under a couple feet of water, while Simmons house just around the corner was unscathed.

"I could only come out to the first bush without getting into the water,” Kennedy added.

Down the street on Alberta, the Saturday rush was interrupted by rushing water.

“We lost business because closing at the busiest time on a Saturday afternoon is really hard for small businesses, especially mom and pop shops like us,” Just Bob owner Bob Chang said.

Chang said they lost about $1,000 in profit on Saturday.

"It may not be much for bigger companies but for somebody like us it’s hard to swallow. But you make do and you move on."

Businesses on Alberta helped one another, as neighbors near the burst did the same.

"[My neighbor] has a drain in his garage and once it started to recess and not flow in - because it was flowing in for quite a while - we were able to clean out the drain and get it to flow out," Simmons said, "and then we had 10 to 15 people in there that were scooping water toward the drain and squeegeeing it out to try to get it dry as fast as possible."

Neighbors across the impacted zone were rushing sand bags around.

“We were all out all together, it was somewhat of a block party,” resident Erin Thomas said. "I rushed home, did our best, got the kids packed up, used brooms to slough water off. And really it was helping neighbors. We have several who are elderly and live on their own in this area and we didn’t want them to feel like they couldn’t get their cars or their belongings out without help."

While they're grateful for the round-the-clock effort to fix the break, we found mixed takes on the city's communication during this mess.

Everyone applauded the fire bureau, utility companies and emergency response volunteers. Residents said that communication was great, and a good test for disaster response and recovery.

"Forty-five to 50 minutes after it started that’s when the water bureau or anybody that could actually solve the problem showed up. Sand for sand bags showed up after damage was done and got dumped a block-and-a-half that direction but water went this direction," Simmons said. "I don’t know that the city got a great grade in this process."

"I feel like lack of communication on city's part was really shameful in that it made us have a lot more stress than we needed,” Thomas said. "The messaging throughout the day was terrible. We never had good solid information. There was five blocks total that need information. That’s not too many households to allocate a city official to do direct good, solid communication." 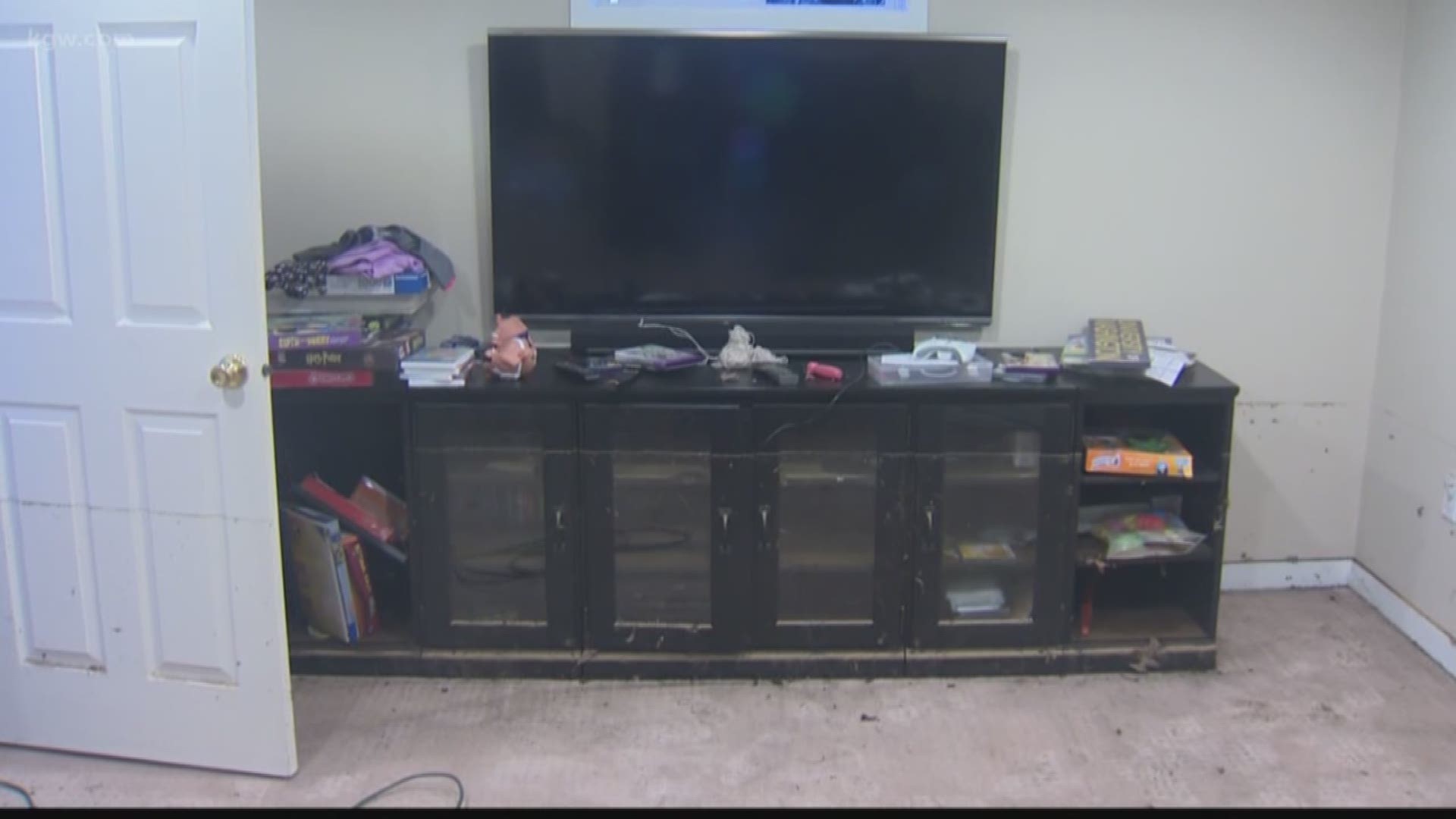 Portland Water Bureau says crews and outreach staff were on scene as soon as possible, posting on social media and holding a press conference.

Their primary responsibility was getting the water turned off and the main fixed, but they say they were available to answer questions.

Meanwhile, other neighbors I spoke with had a different view.

"I’m grateful. I’ve been through Columbus Day storm, earthquakes. This is a nuisance and it’s too bad it happened water and all that but the city has bent over backwards to try to get it done and get it done quickly because that hole is already filled up. They’ve been here night and day around-the-clock," Kennedy said.

Now that the dust has settled, restoration crews were out helping homeowners whose basements and garages flooded with about two-and-a-half feet of water.

“Their basement is destroyed, the furnace is done, their appliances are done. They've got to throw away this couch and all their living room furniture that was down there,” Simmons said of his next door neighbors.

Heather Hafer, City of Portland Office of Management and Finance Public Information Officer, says they are not referring to the incident as "flooding" because from a legal standpoint that definition is too broad.

She says the city has paid out for prior damage caused by water main breaks, but modestly.

"Claims are investigated and may be paid or not based on the results of each incident’s investigation. Payments for claims must be tied to a finding the city was negligent in some way," Hafer said in an emailed statement.

It's not clear if the city is "liable" yet, she says, because in order to make that determination, the city must gather facts and conduct a thorough investigation.

If you were impacted by the water main break, Hafer says you should contact your own insurance provider first.

For information on filing a claim against the City, visit this link. The claim form can be found here.

City officials say each submitted claim will be reviewed and investigated on a case-by-case basis to determine next steps.