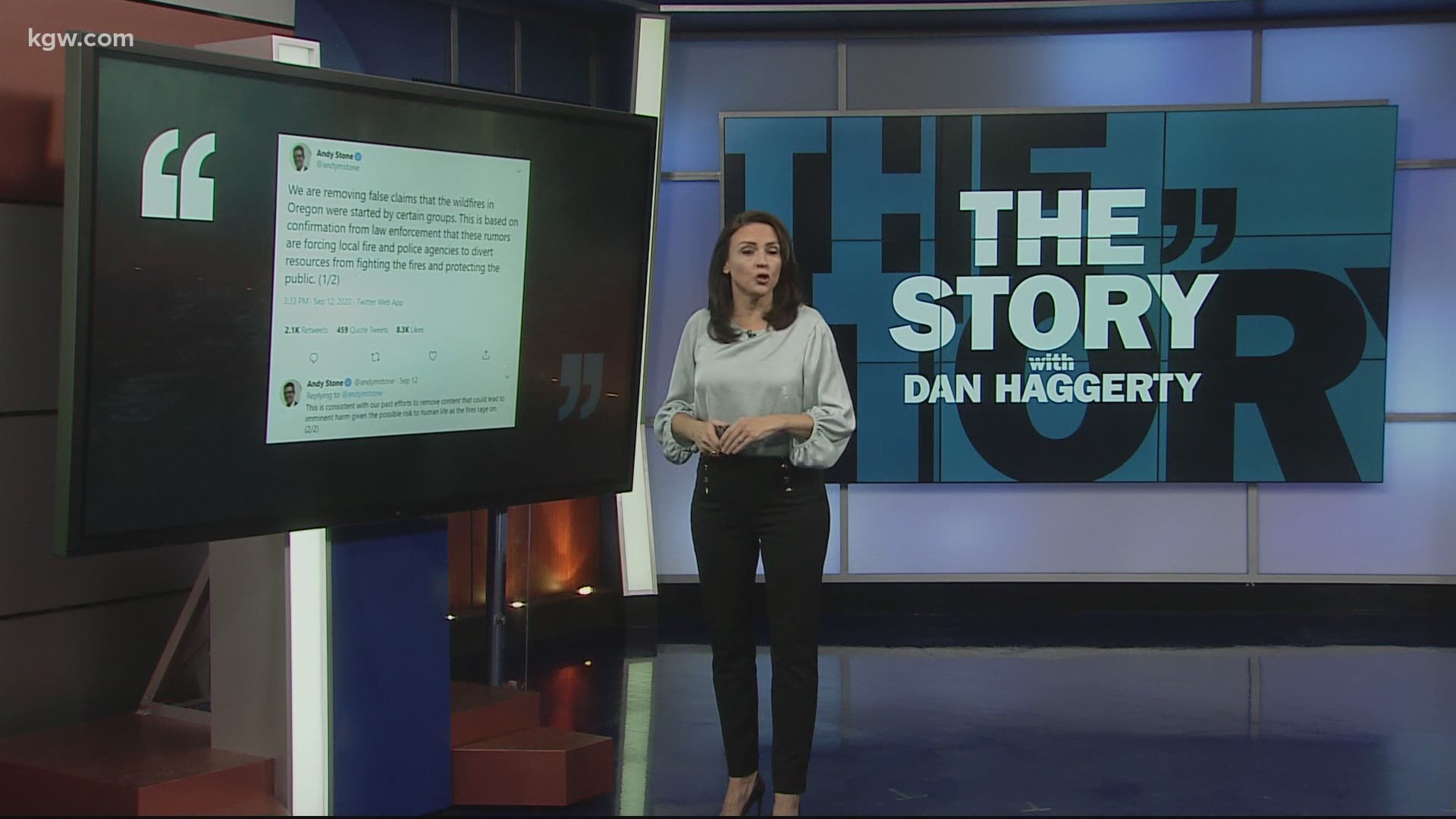 It's hard to tell how and where exactly those rumors started, but a fake Facebook post from the Medford Police Department in Southern Oregon appears to be one of the first sources of this disinformation, claiming someone with antifa affiliations was in jail for setting fires. That was proven to be false by Medford police in an official post on Wednesday, Sept. 9.

The next morning, the Douglas County Sheriff's Office also posted on Facebook, warning their 911 dispatchers were being overrun with information about a rumor that six members of antifa were arrested for starting wildfires. They pleaded with residents to stop spreading these rumors, and to stop clogging 911 call lines.

By Thursday afternoon, hundreds of people had contacted KGW, asking if there were any truths to antifa or other political groups starting fires. These rumors, like the others, were debunked.

Also that day, Clackamas County Sheriff's Capt. Jeff Smith briefed the county's commissioners on the wildfires and told them, "it's not confirmed antifa... but suspected antifa ... in Estacada, there's reports of people armed with chainsaws ... to fall telephone polls to start further fires."

Friday morning, the FBI's office in Portland released a statement they were aware of the rumors extremist groups were starting fires, and said those rumors were found to be not true.

That same day, a Clackamas County Sheriff's deputy who knew he was being recorded, told a citizen, "This is important because antifa mother [expletive] are out causing hell. There's a lot of lives at stake and a lot of property at stake because these guys have some vendetta."

That deputy was placed on leave. The Clackamas County Sheriff's Office hasn't responded to KGW's emails by Monday evening, inquiring whether any actions were taken against Capt. Smith.

Sheriff Roberts -- along with Multnomah County Sheriff Mike Reese -- has warned armed citizens are setting up illegal roadblocks or checkpoints near evacuation zones.

Politicians, including the Republic candidate for Oregon Attorney General, Michael Cross posted on Facebook that the fires were arson and he heard 14 people were involved in starting the fires. Another Facebook post tells people to arm themselves.

Cross told KGW he has no evidence that Antifa or any other group started the fires but he finds the timing of the fires "odd". He has no plans to remove the posts.

To help stop the spread of misinformation, a Facebook communications spokesperson announced Saturday the tech giant would start "removing false claims the wildfires in Oregon were started by certain groups ...  This is consistent with our past efforts to remove content that could lead to imminent harm given the possible risk to human life as the fires rage on."

We spoke with First Draft, an organization specializing in monitoring, verifying and responsibly reporting misinformation about why it's so hard to stop the flood of fake stories.

"I think that everyone is scared, and so they're looking for explanations and they're looking for explanations that confirm their worldview, which is why this stuff travels so quickly," Shaydanay Urbani with First Draft explained. "People are trying to take advantage of the fires for political purposes, too. So, even people who aren't there, who aren't feeling the effects are getting sucked into the story, and I think that with an impending election, with the pandemic, people are struggling to be critical right now," .

Urbani said a phenomenon happening with the Oregon wildfires and many other national stories is that people will use old or unrelated stories as proof something is true. For example, a story about an arson arrest as proof that antifa is behind the fires.

"We see that all the time. That's one of the things that missing that makes misinformation so effective, is that it often has a kernel of truth. And it's in fact, the context that is misleading," Urbani said. "At First Draft, we call this the weaponization of context, you know, taking something that was true or is sort of true and twisting it or re-sharing it in a different context to tell a different story."