Paul Allen, the co-founder of Microsoft and owner of the Portland Trail Blazers and Seattle Seahawks, died Monday from complications of non-Hodgkin's lymphoma. He was 65 years old. 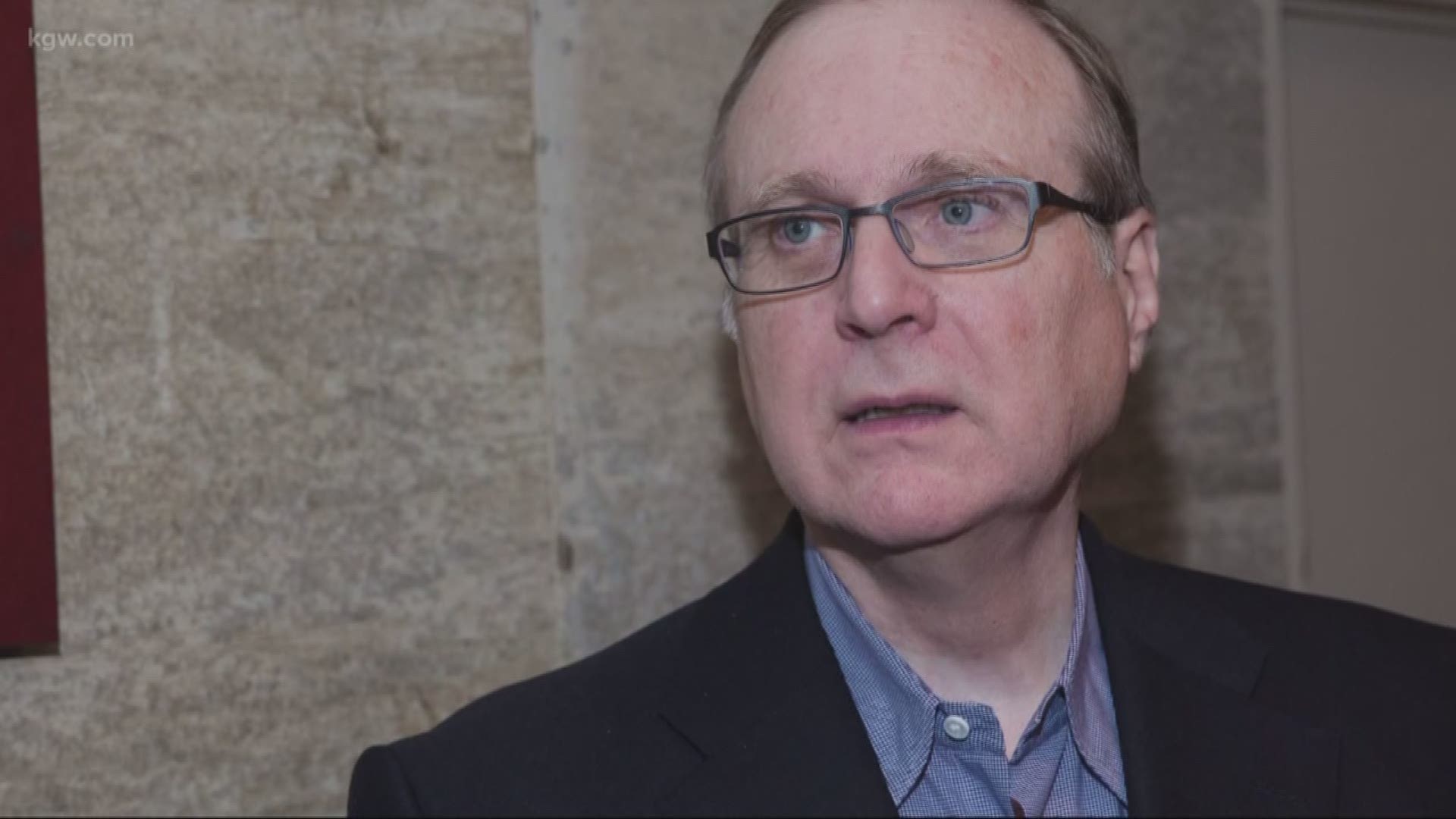 PORTLAND, Ore. — Paul Allen, the co-founder of Microsoft and owner of the Portland Trail Blazers and Seattle Seahawks, died Monday from complications of non-Hodgkin's lymphoma. He was 65 years old.

The news was confirmed by Allen's company, Vulcan Inc.

"All of us who had the honor of working with Paul feel inexpressible loss today," said Vulcan CEO Bill Hilf. "Millions of people were touched by his generosity, his persistence in pursuit of a better world, and his drive to accomplish as much as he could with the time and resources at his disposal."

On Oct. 1, Allen announced that the non-Hodgkins' lymphoma that first surfaced in 2009 had returned.

PHOTOS: Paul Allen through the years

Photos: Paul Allen through the years

Allen co-founded Microsoft Corp. with his childhood friend Bill Gates in 1975. An avid sports fan, Allen purchased the Trail Blazers in 1988 and the Seahawks in 1996.

Microsoft's big break came in 1980, when IBM Corp. decided to move into personal computers. IBM asked Microsoft to provide the operating system. The decision thrust Microsoft onto the throne of technology and Allen and Gates, both Seattle natives, became billionaires. Both later dedicated themselves to philanthropy.

"I am heartbroken by the passing of one of my oldest and dearest friends, Paul Allen," Gates said in a statement. "Paul loved life and those around him, and we all cherished him in return. He deserved much more time, but his contributions to the world of technology and philanthrophy will live on for generations to come. I will miss him tremendously."

"As co-founder of Microsoft, in his own quiet and persistent way, he created magical products, experiences and institutions, and in doing so, he changed the world," Nadella wrote on Twitter.

Over the course of several decades, Allen gave more than $2 billion to a wide range of interests, including ocean health, homelessness and advancing scientific research.

With his sister Jody Allen in 1986, he founded Vulcan, the investment firm that oversees his business and philanthropic efforts. He founded the Allen Institute for Brain Science and the aerospace firm Stratolaunch, which has built a colossal airplane designed to launch satellites into orbit. He has also backed research into nuclear-fusion power.

"While most knew Paul Allen as a technologist and philanthropist, for us he was a much loved brother and uncle, and an exceptional friend," said Allen's sister, Jody Allen. "Paul's family and friends were blessed to experience his wit, warmth, his generosity and deep concern. For all the demands on his schedule, there was always time for family and friends."

RELATED: 'His legacy will live beyond bricks and mortar': Remembering Paul Allen

Allen bought the Trail Blazers for $70 million in 1988 when he was 35 years old. He told the Associated Press that "for a true fan of the game, this is a dream come true."

"You know when he first bought the team, he was like a kid in the candy store," he said. "He was always very concerned about his players. Always had an open door to talk about anything about life, you know, business or anything that he felt he could lend support to his guys."

Allen was instrumental in the development and funding of the Rose Garden, now known as the Moda Center. Allen purchased the arena in 2007.

Under Allen's leadership, the Trail Blazers went to the playoffs 23 times, including the NBA Finals in 1990 and 1992. The franchise was valued at $1.05 billion in 2017, according to Forbes.

Allen purchased the Seahawks in 1996. The Seahawks went to three NFC championships and three Super Bowls, winning the Super Bowl in 2014.

Pete Carroll, the coach of the Seahawks, tweeted the following: "Deeply saddened by the passing of @PaulGAllen. I’ll miss him greatly. His gracious leadership and tremendous inspiration will never be forgotten. The world is a better place because of Paul’s passion, commitment, and selflessness. His legacy will live on forever."