At first, people thought Biles was hurt. She later said the emotional toll of the Tokyo Games caused her exit. 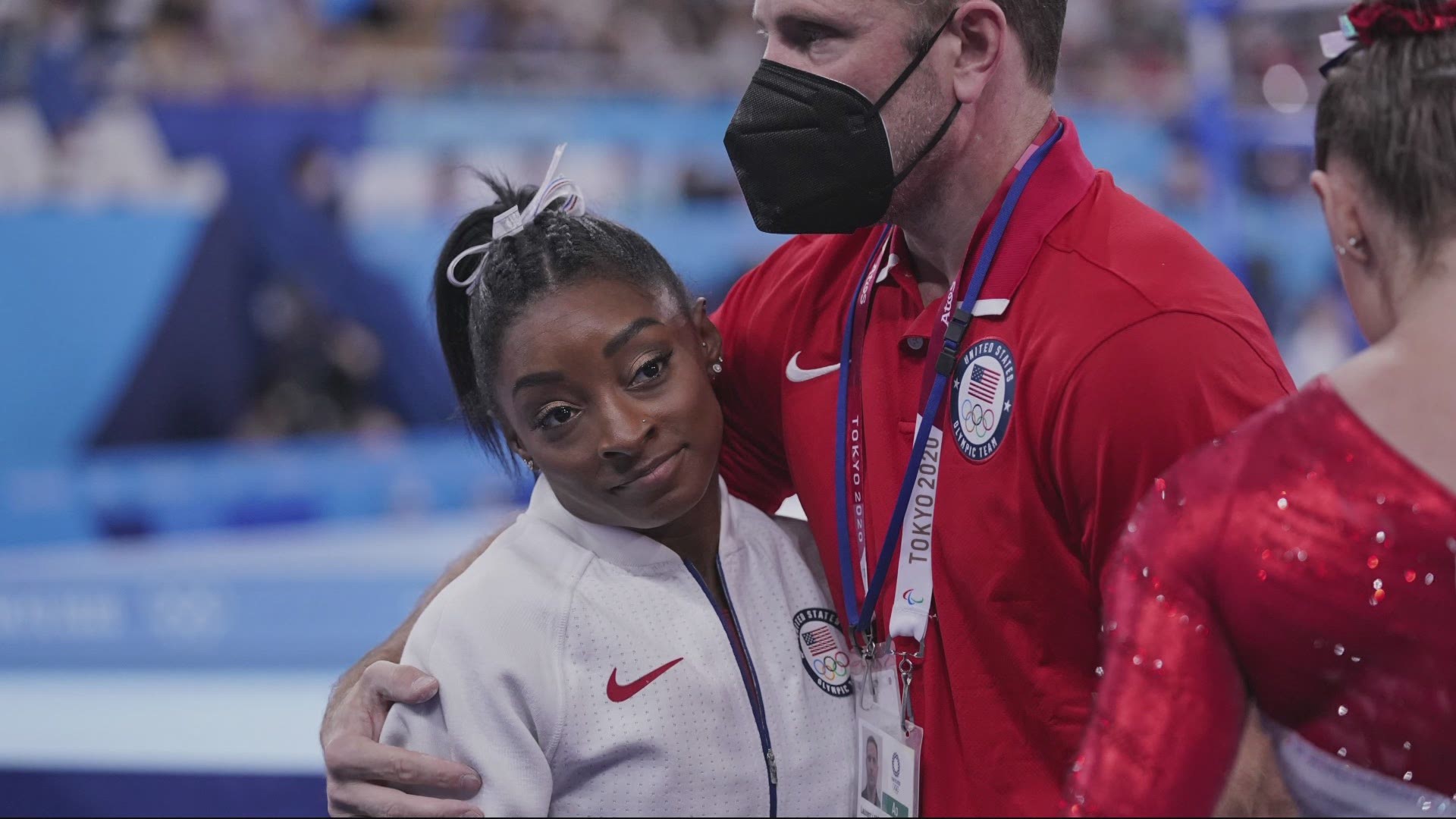 PORTLAND, Oregon — Early Tuesday morning, Team USA Gymnastics won silver. But Simone Biles — considered the best gymnast of all time — shocked the world when she pulled out of the competition.

She cited her mental health as the reason.

Arguably the biggest star at the Olympics, Biles, 24, walked off the floor Tuesday after her vault rotation during the U.S. gymnastics team final.

"As fans we look and see them do so many superhuman things, we don't think they act like us in any way. But in reality they're all human," said mental performance coach Brian Baxter with AMPlify Sport Psychology in Portland.

"There is a perception that athletes should stay quiet and keep a façade up for everyone to see. But really, she is even more of a role model in my eyes today because she has become so real," three-time Olympic gold medal swimmer Carrie Steinseifer Bates said.

Bates is now the Oregon regional outreach manager for the Hazelden Betty Ford Foundation, a drug and alcohol treatment center.

When the announcement first came out, many thought Biles was hurt. She later said the emotional toll of the Tokyo Games caused her exit.

"There's internal and external pressure," Baxter said. "If I were to guess, it would be that pressure of the situation and trying to live up to, who's expecting anything less for her than to win it all?"

After the first day of competition, Biles posted a photo on social media with a caption saying, "I truly do feel like I have the weight of the world on my shoulders at times. I know I brush it off and make it seem like pressure doesn't affect me but damn sometimes it's hard hahaha! The Olympics is no joke!"

"She and other athletes, they really owe us nothing," Steinseifer Bates said. "She has given us years of joy, she's given USA Gymnastics years of joy, and she has suffered. She suffered at the hands of Larry Nassar."

Steinseifer Bates applauds the gymnast for putting her health over gold and breaking the stigma.

"Part of her greatest legacy that she will leave is what she did today. The courage it took for her to be transparent and honest about not being okay. And it's okay to not be okay sometimes," Steinseifer Bates said, "She really shared a message with the world that when we’re not OK we have to do what we have to do to take care of ourselves. For her today that looked like removing herself from the competition."

Team USA went on to win the silver medal Tuesday, as Biles cheered them on from the side.

She told NBC News that her teammates were "freaking out" and crying when she told them she was going to sit out the rest of the finals.

"I was like, 'You guys need to relax. You're gonna be fine without me. Go out there, you kick some butt just like you've done in training. And just lay it out on the floor and see what happens'," Biles told NBC News' Hoda Kotb.

When asked if we'd see her Thursday, Biles said she's taking it day by day.

"At the end of the day, we've got to be healthy and happy. There is more to life than that gold medal," said Baxter with AMPlify Sport Psychology.

After Biles walked off the floor, Vancouver's Jordan Chiles subbed in on the uneven bars. Biles later posted on Instagram saying she was so proud of her teammates for stepping up and winning silver.