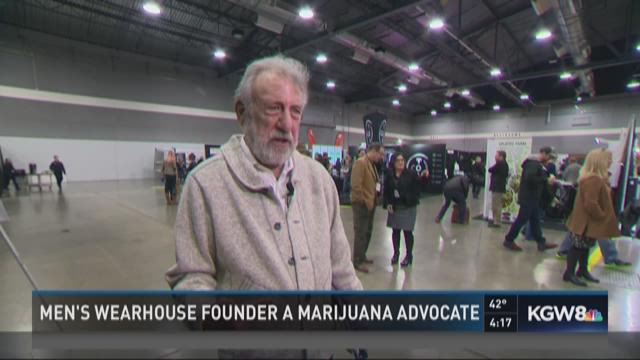 PORTLAND, Ore. -- He's famous for his decades of television commercials and the slogan, "You're going to like the way you look, I guarantee it."

This week, George Zimmer, the founder and former CEO of Men's Wearhouse, is in Portland talking about marijuana. The 68-year-old says he's been smoking pot for 50 years in lieu of alcohol and cigarettes.

Zimmer says now he's trying to tell people you can smoke it for decades like he has, and be a successful business person. Zimmer is no longer part of Men's Wearhouse, making headlines in 2013 when he was ousted by a disagreement with his partners over the future direction of the company.

A packed crowd at the Portland Expo Center on Wednesday came to see Zimmer as the keynote speaker of this year's Cannabis Collaborative Conference, where businesses show off their latest technology for the billion-dollar industry.

"There are a lot of successfull businessmen like myself who use marijuana recreationally," Zimmer said. "We've had such draconian laws, it's been impossible for most people to speak out about it. But if America knew who actually was smoking marijuana, they'd throw up their hands and say why didn't the government tell us this. As I've said before, I think cannabis prohibition is one of the biggest cons ever perpetrated in this country."

"I'm here to learn, primarily," said Peter Sternkopf of Five to Nina Alchemy, an organic marijuana grow operation in Oregon. Sternkopf was fascinated to hear George Zimmer legitimize an often awkward-to-talk-about, industry. "When people like that are behind it, it gives me a little more confidence to go to conferences like this."

Anya Gordon, CEO of Grotec Builders in Oregon, is one of the few female voices in the industry.

"Definitely I am almost always the only woman sitting at the table," Gordon laughed.

Grotec helps marijuana growers design and build their massive warehouses. Everything from acquiring land that's zoned for marijuana, to designing the HVAC system, lighting and ventilation.

She says Oregon is on the forefront of trying to get a handle on the marijuana industry's energy consumption.

"It is on track to be one of largest energy consumers as an industry that there is. On track with server rooms. We use a lot of energy in this industry," Gordon said. "You're building an indoor farm, replicating what's found in nature but much less consistently and that's costly and it's hugely consumptive." Gordon says a 10,000 square foot growing warehouse pays an electric bill in the ballpark of $15,000 a month. She's working with Energy Trust of Oregon to find ways to use more LED lights, and triple coil HVAC systems to cut that usage down.

Many agree, Oregon is leading the way in cannabis pricing, growing and energy-saving methods. California just voted to legalize recreational marijuana, which will go into effect in January.

"There are so many people now who are involved in medical cannabis or otherwise, that I don't think you can put the cork back in the bottle, I think it's out," Zimmer said.

Now he's publicly out with his passion for a drug that's got him tweaking his famous slogan. He said he likes the sound of, "You'll like the way this burns, I guarantee it."

The Cannabis Collaborative Conference continues through Thursday, Feb. 16, at the Expo Center.