Wheeler, police and community leaders spoke about the ongoing protests in downtown Portland, which included more vandalism over the weekend. 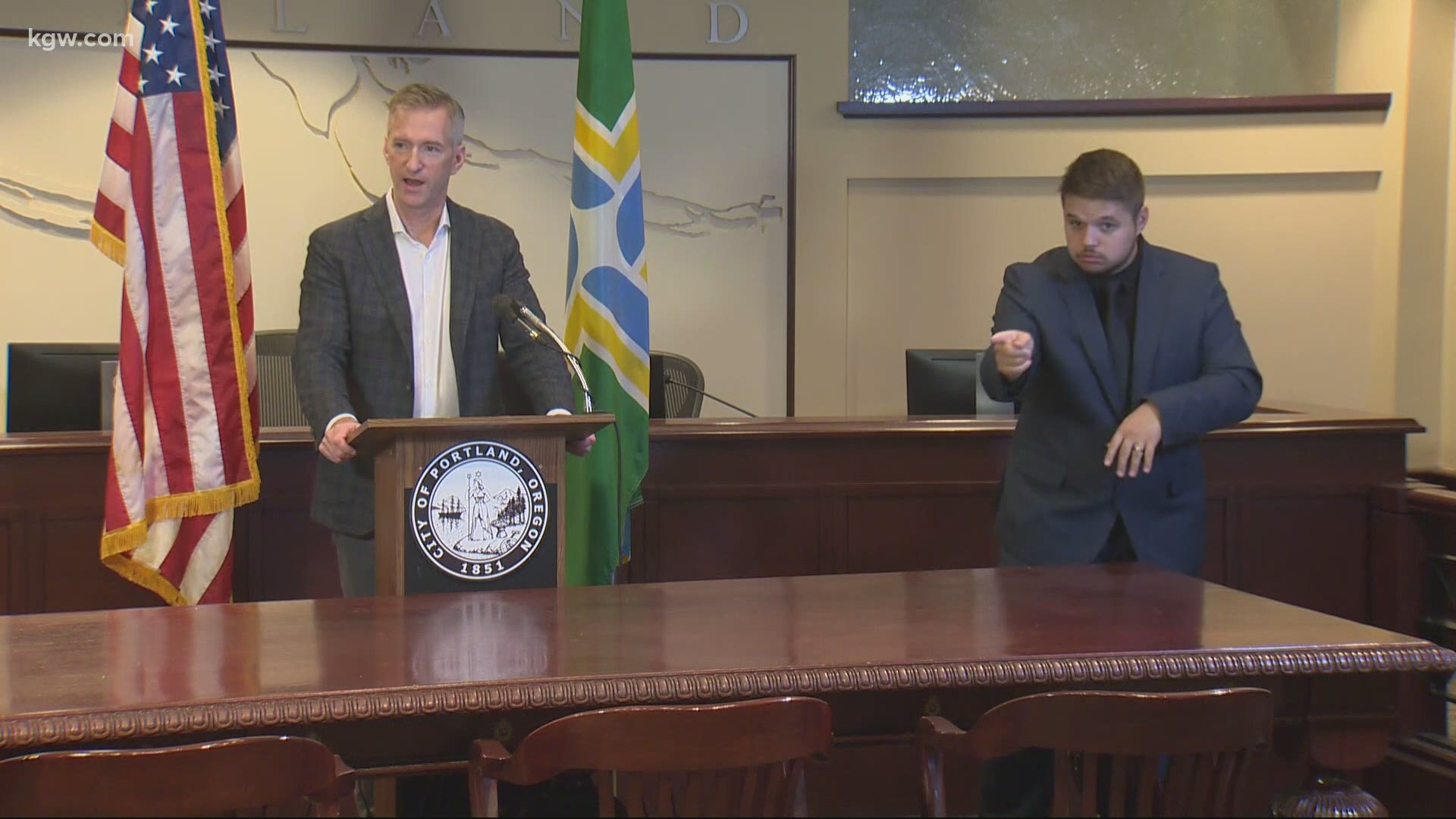 On Sunday night, police declared a riot after a group marched through the South Park Blocks in downtown Portland, toppling statues of Abraham Lincoln and Theodore Roosevelt.

The group also broke windows and threw flares into the Oregon Historical Society. Someone stole an Afro-American Heritage Bicentennial Commemorative Quilt, which was made by 15 local Black women ahead of the bicentennial and was on display inside the museum. Officers found the quilt blocks away, soaking wet with a small tear.

“I broke down in tears,” said Nicole Yasuhara, deputy museum director, upon hearing the quilt had been taken. “I felt like maybe people didn’t understand what this quilt meant.”

Yasuhara and fellow museum staff laid the quilt out on towels Monday morning. It’s dirty, and the colors are bleeding between fabrics. Restoration began immediately.

“We’re trying very hard to make sure it dries, and while we do that, we’re hoping that it doesn’t warp or become misshapen during the drying process,” Yasuhara said.

“The people who did this don't understand the phenomenal work we do here and how we have worked to tell the true story of Oregon. The good, the bad and the ugly,” said Kerry Tymchuk, executive director of the Oregon Historical Society. “History moves forward and things improve because of learning and education and discussion and conversations, and not through vandalism.”

Tymchuk added damages to the museum are estimated at around $25,000. He expects that number to rise.

Here’s the Afro-American Heritage Bicentennial Commemorative Quilt, which was stolen from the @OrHist last night. Was made by 15 local Black women (ahead of the Bicentennial).

A few blocks south of the Oregon Historical Society, John Jackson believes someone drove by his restaurant, Heroes American Café, and fired bullets from a car.

A third window was smashed, as well. Johnson believes someone took a baseball bat to it.

Thankfully, no one was in the restaurant when it happened. Jackson, a veteran himself, has decorated the restaurant with photos of first responders. He thinks protesters, angry at police, targeted him.

“Whoever they were, they were definitely agitators. There's no way peaceful protests would have taken the turn they did last night. There's no reason to damage property,” he said.

Portland police made three targeted arrests Sunday night, according to Lovell, and more arrests may be forthcoming as police continue to investigate.

"We are five months into this and we still have a fairly high level of violence taking place," he said. "We need to all come together and be mindful of what we want as a city and what we're willing to tolerate.

"These events late at night, they purport to have a racial justice nexus. But they're not that. They're about violence and criminal destruction. They're really hurting our community and we all deserve better."

Wheeler said the actions of the people that continue to engage in criminal activity late at night in downtown Portland are "an affront to the values of this community."

"These acts are obscene," Wheeler said. He said it was "deeply troubling" to see the group attack the Oregon Historical Society, which he said has "gone out of its way to reflect the truth of Oregon history and educate the public about all aspects of Oregon history, the good, the bad and the ugly."

"It's ironic that this was the institution that was chosen to be attacked by this anarchist behavior," Wheeler said.

"Public access to art is vital to our city’s cultural fabric," she said in a statement. "I condemn all acts of violence and destruction, especially those targeting public art. As your next Mayor, I’m ready to talk about how we move this city forward, from rethinking public safety to changing names and removing statues."

Iannarone said if people want statues removed, they can participate in the public process and register a complaint.

"I'll push city council to listen and act swiftly," Iannarone said. "Our systems of government have long ignored problematic symbols and impacts of institutional racism, I am committed to changing that as mayor. People are hurting and that pain is valid. But anonymous acts of destruction outside of any agreed-upon process are toxic, unaccountable behavior that has no place in our city."

1 / 7
KGW
Protesters toppled statues of Abraham Lincoln and Theodore Roosevelt and broke windows at the Oregon Historical Society on Oct. 11, 2020 in Portland.

Oregon Rep. Tawna Sanchez, the second Native American to serve in the Oregon Legislature and the first to represent Portland, also spoke at Monday's press conference.

The group that organized Sunday's event called it an "Indigenous Peoples Day of Rage." Sanchez said while she doesn't speak for the entire Indigenous community, she said that the majority of people she spoke with in that community said they stand with the Black Lives Matter movement and "the fact that people would hijack Indigenous People's Day to cause more violence is not appropriate."

Sanchez said that attacking the Oregon Historical Society was "unconscionable."

"That place is so amazingly a part of the actual truth of our state," she said. "The Oregon Historical Society has done an amazing job of late really recognizing their importance to this process, to being able to speak out to the things that we know were wrong and helping us try to change them. And to destroy that is to destroy the past. We have to grow and learn from the past. We cannot just dismiss it and make it go away and act as if something is going to be better afterward. That's been a truth forever: We have to learn from the past to make it better."

Members of the Portland Indian Leaders Roundtable, a partnership among 30 organizations, tribes and tribal programs in the region who serve, advocate for, and work within the Native community, met Monday morning and issued a statement about Sunday night's riot.

"We, the members of the Portland Indian Leaders Roundtable, disapprove of the destruction and theft of property, and threat of violence, by those participating in demonstrations last night," the statement read. ". . .we cannot condone pointless acts of vandalism and the brandishing of weapons that serve only to detract from the real message that must be heard: Indigenous people continue to suffer at the will of systems designed to eradicate our self-determination, culture, economies, and families. Until we dismantle those systems, there will be no justice."

Tymchuck said when he came into the office this morning, he found a dollar bill on the front desk with a note written on a napkin. The note was from a person named Oscar.

The note read: "Hello. I'm homeless. So I don't have much to give to you. Just some of my bottle-collecting money. But I saw your windows got broken and I wanted to help. You once gave me a free tour before the pandemic, so this is a thank you."

Tymchuck said OHS has received many generous donations over the years, some exceeding a million dollars. But "no donation means more to me and the society than this dollar donation from Oscar," he said.

Wheeler said it's that kind of community response that is needed to end this pattern of late-night violence in downtown Portland.

"The most important thing we can do now as a community is make it clear that if you are in our community and you are engaged in violence or criminal destruction, you are not standing with us," Wheeler said. "You are opposing us. You are working against our values and our sensibility as a city."