May Day demonstrations held throughout Portland

May 1 is International Workers' Day, a traditional day for marches, demonstrations and rallies in the Portland area 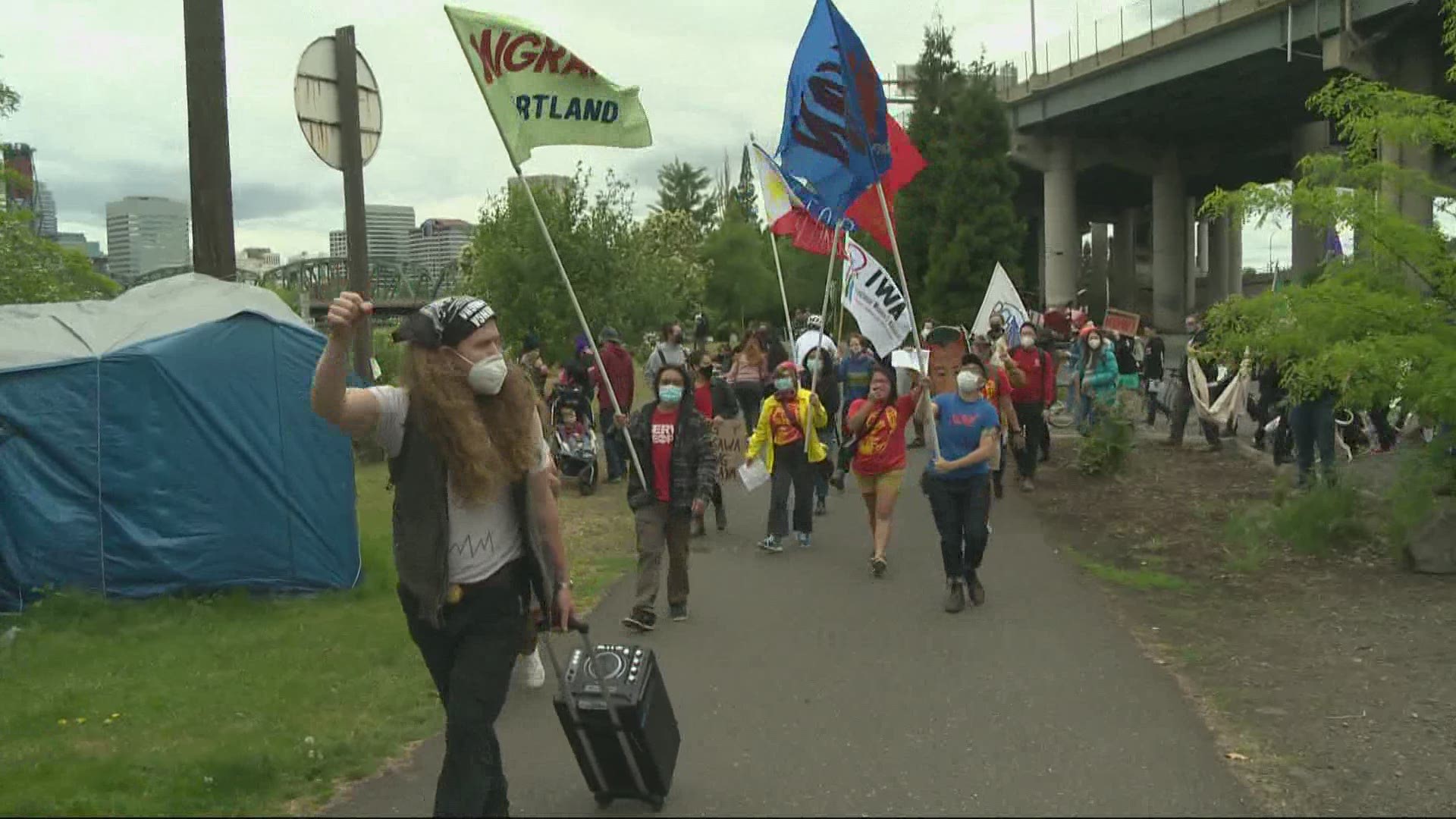 PORTLAND, Ore. — May Day demonstrations took place throughout Portland on Saturday, and more are expected later in the day.

May 1 is International Workers' Day, a traditional day for marches, demonstrations and rallies in the Portland area.

In the morning, dozens gathered at Holladay Park in Northeast Portland to support the PRO Act, a bill that expands various labor protections related to employees' rights to organize and collectively bargain in the workplace.

The event was planned by the Portland Democratic Socialists of America to send a message to Congress to pass the bill.

At the Eastbank Esplanade along the east side of the Willamette River near the Hawthorne Bridge, several organizations including the International Migrants Alliance went to advocate for better working conditions for migrants.

People in that group eventually made their way to the Immigration and Customs Enforcement (ICE) building near the South Waterfront for an "Abolish ICE" rally, where speeches have been taking place.

Video from journalists on scene shows a large law enforcement presence, but there have not been reports of criminal activity there.

May Day demonstrations in Portland, Oregon

An “Abolish ICE” rally outside an ICE facility pic.twitter.com/sBP25GdaG0

Portland police said the demonstrations impacted traffic, mostly downtown. They arrested one person arrested on Southwest Fourth Avenue between Jefferson and Columbia, a couple blocks away from the Justice Center.

Police said Michael Isaacs, 26, had body armor and weapons on him. He was booked into the Multnomah County Detention Center on charges of menacing and second-degree disorderly conduct.

Portland Police make an arrest after witnessing an individual using the Seig Heil at multiple passing vehicles outside of Portland City Hall, where they were confronted by multiple individuals. #Portland #Pdx pic.twitter.com/mUTjZ1GwDO

While demonstrations remained largely peaceful during the daytime Saturday, one event after nightfall in downtown led to several broken windows, and police to declared a riot. Multiple people were arrested.

Two of the arrestees had outstanding warrants. There is no allegation that either committed a new crime on May 1, according to the District Attorney's Office.

Krystopher Donnelly and Darren Stephens on outstanding warrants on cases previously issued by the state. Neither individual is accused of committing a new criminal offense on May 1, 2021.

Phoebe Loomis is charged with one count of felony riot and three counts of Criminal Mischief in the First Degree.

In the past, Portland has seen massive turnouts for the demonstrations on May Day. Sometimes the protests have turned violent.

In 2019, after a peaceful day of protests, a brawl between about 60 supporters of right-wing Patriot Prayer and left-wing antifa broke out outside the Cider Riot Bar in Northeast Portland. Six men were indicted for felony riot in connection with the brawl. In 2017, a May Day march turned into what police called a riot, and included fires in the street, violence and 25 arrests.