A Stayton High School graduate was one of the Marines aboard a helicopter that collided into another Marine chopper off the Hawaiian island of Oahu early Friday morning, according to the Marine's family. 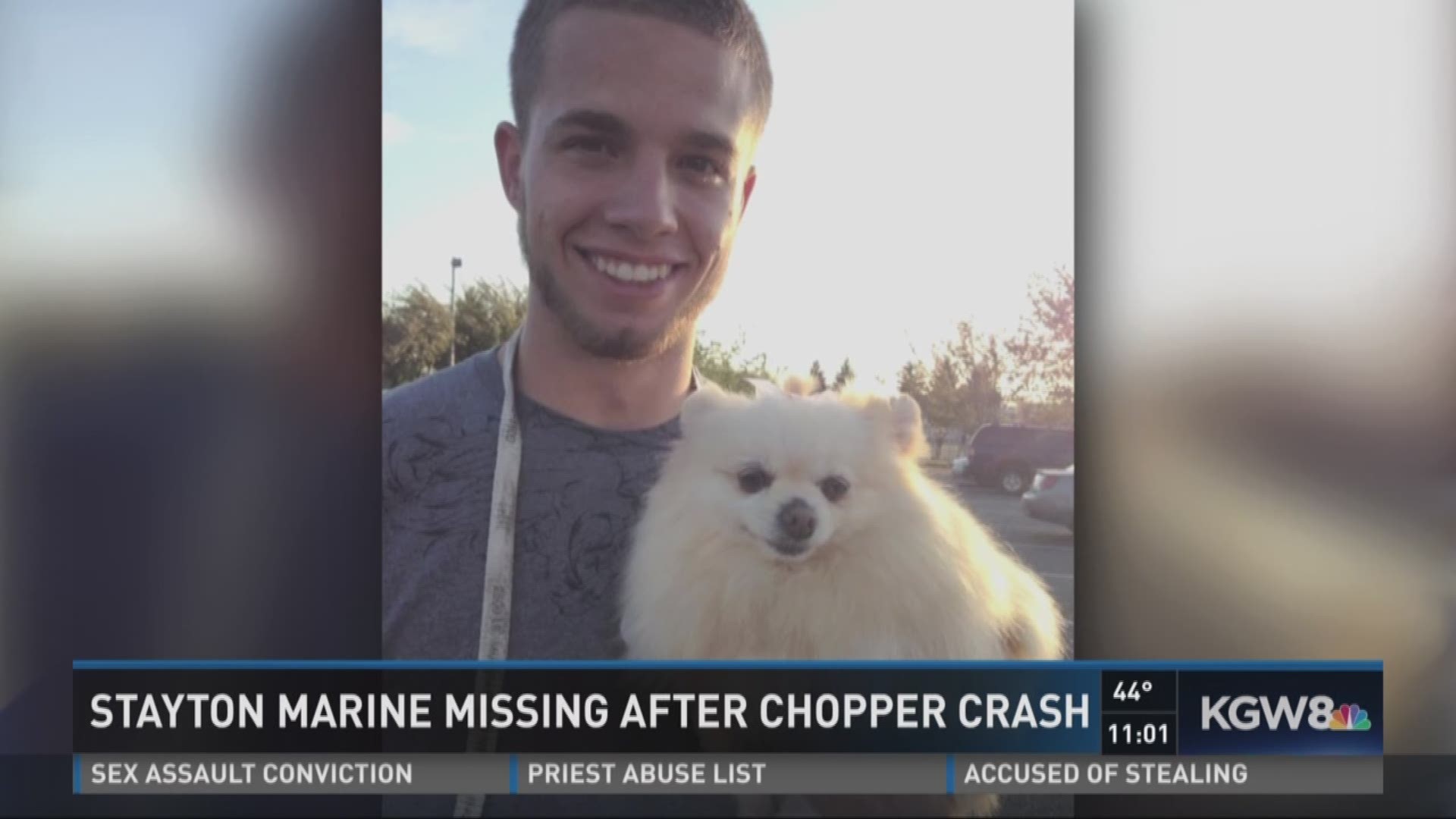 HONOLULU — A Stayton High School graduate was one of the Marines aboard a helicopter that collided into another Marine chopper off the Hawaiian island of Oahu early Friday morning, according to the Marine's family.

Ty Hart, 21, was one of 12 crew members aboard the two helicopters, Hart's family told KGW's Katherine Cook. Hart was a crew chief.

Hart got married six months ago, according to a family spokesperson. Hart's family is waiting for updates about the crash and requesting privacy.

Hart graduated from Stayton High School in 2012 and played on the Stayton Eagles football team.

None of the Marines aboard the helicopters have been located.

Navy destroyers Gridley and John Paul Jones are taking part in search and rescue efforts along with the Coast Guard cutter Kiska and an MH-65 Dolphin helicopter from Coast Guard Air Station Barbers Point, officials said. A Coast Guard A C-130J was also part of the search but had to land when a bird struck it, said Coast Guard spokesman Lt. Scott Carr.

Marine Corps Base Hawaii posted a message on its Facebook page asking members of the public not to touch any debris from the helicopters that washes ashore and to respect any local police or fire department cordons around debris.

"Please note the location of debris and we will provide you a number to call very shortly," the message says.

Coast Guard Chief Petty Officer Sara Mooers told The Associated Press that the Marine Corps reported a collision of two helicopters off the coast just before midnight, or 5 a.m. EST.

Mooers said each aircraft had six people aboard and that a debris field has been spotted 2½ miles off the coast, near the town of Haleiwa.

There was a high surf advisory in effect. Rescuers are facing 10-foot waves that were expected to rise. KHON TV in Honolulu reports witnesses in the area heard a loud boom over the water and saw a big flare in the sky. Rescuers have spotted a fire and a debris field, including an empty life raft, but no signs of survivors as of 8:30 a.m. EST.

Marine Corps Base Hawaii posted a video Wednesday of a CH-53 from Marine Heavy Helicopter Squadron 463 conducting an insert and extra training mission aboard the CW3 Harold C. Clinger.

Posted by Marine Corps Base Hawaii on Wednesday, January 13, 2016

Marine Capt. Timothy Irish confirmed to AP that an active search and rescue is underway for two CH-53s — transport helicopters. He said the aircraft were from the 1st Marine Aircraft Wing from Marine Corps Base Hawaii.

There was no immediate word on what caused the collision or if any survivors have been found.

In a statement released Friday night, Rep. Tulsi Gabbard, D-Hawaii, said, “My heart is with the Kaneohe Marine Corps Base service members involved in the tragic helicopter crash last night, and with their loved ones. We must never forget the risks our servicemembers take every single day, whether in training or in combat, as they put their lives on the line for the security of our nation. I'm continuing to monitor the search and rescue efforts closely, and offer my support to all the military, local and federal responders who are leading these efforts.”

Marine Heavy Helicopter Squadron 463, commanded by Lt. Col. Eric Purcell, is the only CH-53E squadron assigned to 1st Marine Aircraft Wing. The “Pegasus” squadron was activated in 1944, has operated on both coasts, and is currently based in Hawaii. They have been deactivated three times and have served in three Marine aircraft wings.

The squadron began transition to the CH-53E Super Stallion in September 2011.

Why that Fitbit might no be so good for you