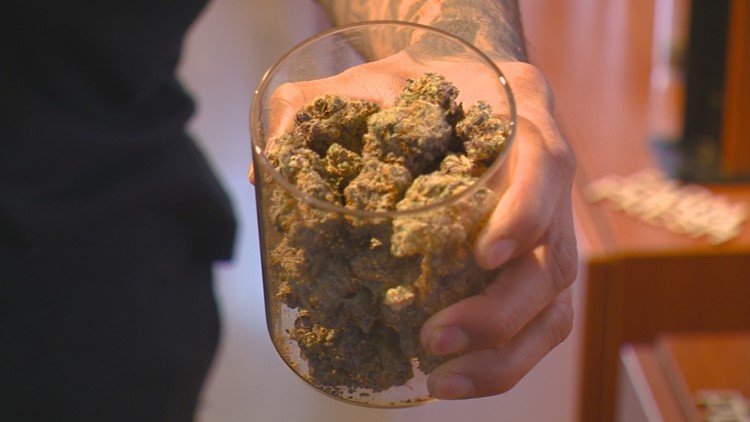 Photo by: Paul Boehlke/KTVB
Marijuana is big business in Ontario, where three dispensaries have opened since late July. A large percentage of customers are coming from Idaho, where pot remains illegal.

Report: Oregon's marijuana sales are 420% above the statewide average in counties along Idaho border

BOISE, Idaho — It's no hidden secret that Oregon is seeing higher marijuana sales in counties along their borders with Idaho, but a new report from the Oregon Office of Economic Analysis found exactly how much more those counties are selling compared to the statewide average.

Oregon counties along the Idaho border have a sales per adult that are 420% above the statewide average, which the report said was something "you cannot make up."

The report also found that marijuana sales in Baker County dropped by about 80% when dispensaries in Malheur County opened, because of what the report describes as the "border effect." A border effect is defined "when neighboring jurisdictions have different rules, regulations or tax rates for the same industry or product," according to the report.

Since Malheur County is about 30-60 minutes closer to potential customers traveling into Oregon, people are shopping at dispensaries that aren't as far away, the report said.

Last November, KTVB traveled to Ontario to speak with marijuana dispensary owners and city officials about how their first pot shops have affected the city of about 11,000. Ontario City Manager Adam Brown told KTVB at the time that "this (the City of Ontario) is the marijuana capital of Idaho."

RELATED: Boise senator introduces bill to decriminalize some drugs: 'We need to get a discussion started because what we're doing is not working'

RELATED: Here are the Oregon counties where people buy the most cannabis

The report found that the border effect is a major contributor to higher marijuana sales because local socio-economic factors couldn't be sole reason for higher sales (no pun intended).

In Idaho, it's unlikely that recreational marijuana will become legal in the near future. However, one state senator from Boise introduced a bill that would decriminalize some drugs, but he even admits that "this bill is not a bill that can pass," but still wants to get a conversation started about drug treatment. A group is also in the process of gathering signatures to get medical marijuana on the ballot for the November elections.

RELATED: Sunset Lanes in Ontario is adding a pot shop to help keep the bowling alley in business