A Portland company is one of a few in the state to create a CBD marijuana patch that can alleviate pain or inflammation. 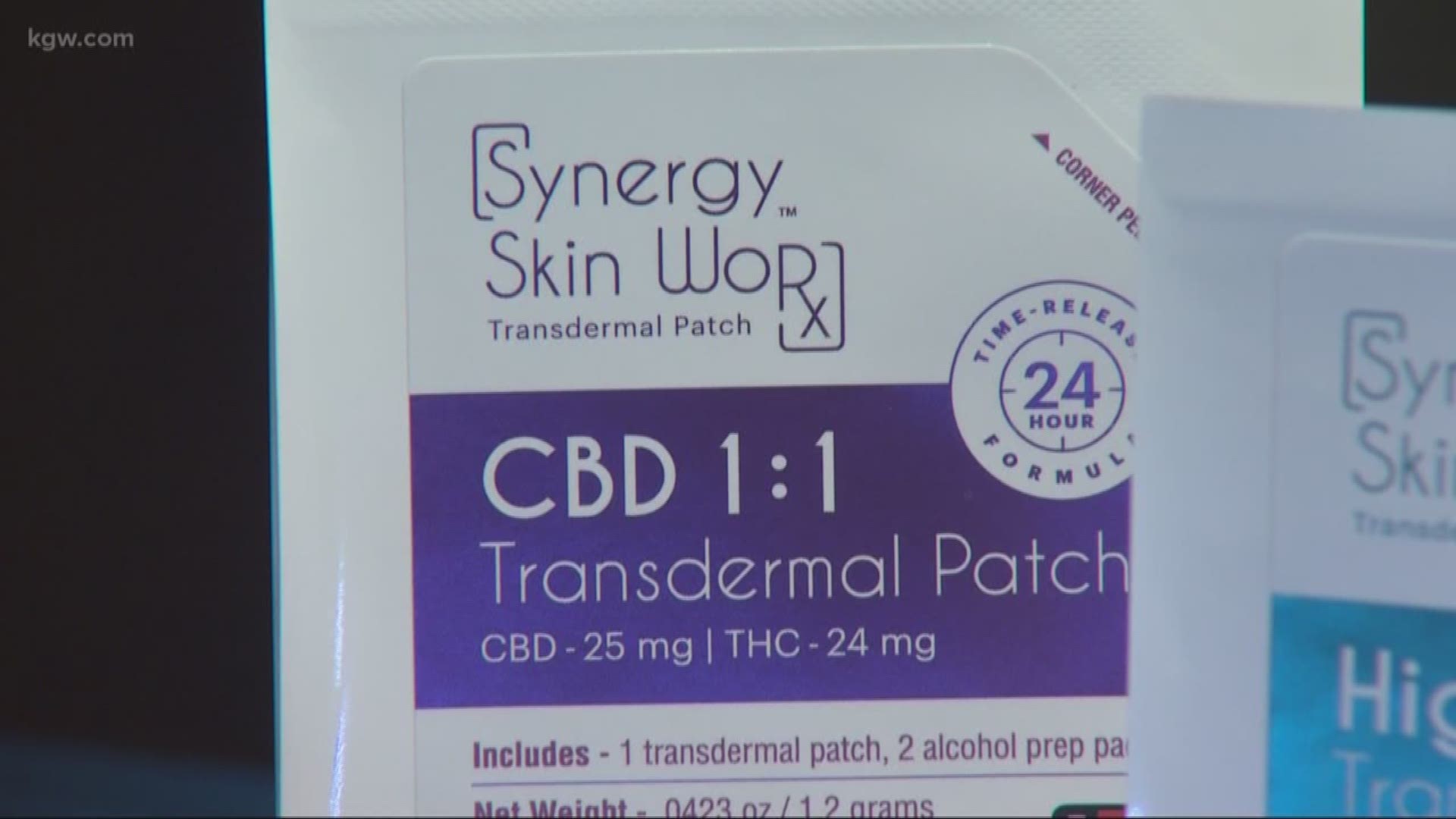 A Portland company is one of a few in the state of Oregon to create a CBD (cannabidiol) marijuana patch that sticks on your skin, similar to the way a nicotine patch works.

Mandy Seybert owns Synergy Skin Worx. Her company grows medical and recreational marijuana flower in Clackamas County, and now is bringing what was once only for medical pot patients and rigorously lab tested, to the recreational user. Their transdermal patch is now for sale at recreational dispensaries for the first time.

"We have a high CBD patch with 63 milligrams and we do it in a 36-hour time release. Then we have a half THC, half CBD version, and a full THC version," Seybert said. "You just peel off the film from the plastic after you've cleaned the area and go ahead and apply it to your skin."

It's similar to the way Ibuprofen or Advil can alleviate pain or inflammation, but can also be as effective for relief as prescription pain medications.

"Surprisingly, a lot of nursing homes patients have been our biggest clients. A lot of the nursing homes will allow someone separate from the facility, like a family member, come in and place a patch on someone and it was mainly the CBD and that was what was helping," Seybert said.

CBD is the non-psychoactive compound found in marijuana that doesn't get you high like THC does. The patch is discreet and hides under clothes, there's no smell or mess, and there's no watching the clock to take another pain pill.

Related: US experts back marijuana-based drug for childhood seizures

"I live with a lot of pain. I have very limited function of my hands," she said, showing us her fingers.

Malott suffers from rheumatoid arthritis and osteoarthritis, among other ailments. Malott says she was taking well over a dozen drugs at one point, costing her at least $2,000 a month. She's gotten off all that now, and just uses a patch a day. At between $20-$30 a patch, her costs are now $900 a month.

"It's like finally someone is hearing us. This is a product that works so well and you don't have terrible side effects," Malott said.

Dr. Janice Knox has 30 years of experience as an anesthesiologist but now specializes in prescribing correct levels and types of cannabis for patients suffering. Her family-run American Cannabinoid Clinics, based in Portland, but with locations in Roseburg, Medford and McMinnville, was just featured on the NBC show Megyn Kelly Today.

"I think patches are wonderful," Dr. Knox said. "I support that wholeheartedly. The vast majority of demographic for cannabinoids is that age 50 group and above, the senior citizens. I'm always cheering them on because they have been stuck on medications and it's not that pharmaceuticals aren't needed, it's the way we use them is wrong."

Democrat Senate Minority Leader Chuck Schumer just introduced legislation that would decriminalize marijuana on a federal level. He told Vice News Tonight that if marijuana isn't hurting anyone else, it should be legal. Schumer's legislation would remove marijuana from the list of scheduled substances under a 1970 law that classifies marijuana as dangerous as heroin for legal and regulatory purposes.

Dr. Knox believes we're at a tipping point for marijuana and that physicians may soon be able to open up and talk about it with their patients as a viable, legitimate way to help pain.

"The more politicians come on board, the happier patients will be. I think there's a lot of fear still," she said. "They're concerned about the stigma. At the same time people feel like our politicians need to move in the direction of getting this off schedule 1."