Lindsey Graham re-opened her salon in Salem because the shutdown was hurting her and her family financially. 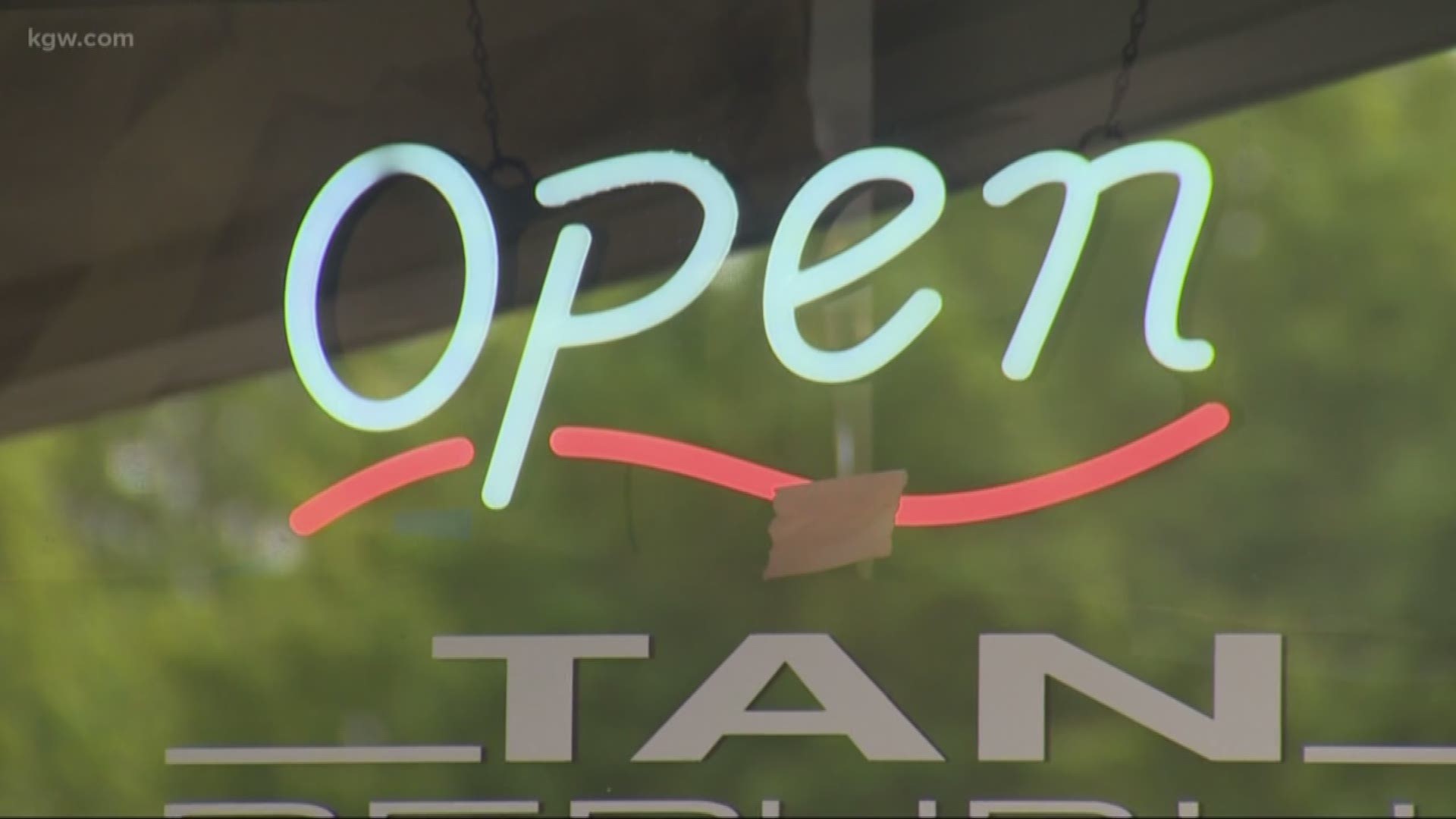 SALEM, Ore. — In Salem Tuesday, a woman with a black mask covering her mouth and nose opened the door to her salon and let a man inside to the cheers of strangers who gathered on the sidewalk.

It was an act of defiance and, she said, desperation.

The woman in the mask is Lindsey Graham, owner of Glamour Salon in downtown Salem. Tuesday morning, she let in her first customer since Gov. Kate Brown's Executive Order closing businesses and enforcing social distancing.

Graham reopening her store violated that order, but she said she needed to provide for her family.

"I can’t speak for other businesses," Graham said. "I know they need to make a living. If they can open their business safely – I would encourage that. I can only speak for myself and what I need to do is provide for my family."

The city of Salem on Tuesday night sent a letter to Graham warning her that opening her business would be a violation of her lease.

"While we understand and appreciate the challenges and hardships to you, your staff, and your business brought about by the Covid-19 crisis, please note that operating your business while Executive Order 20-12 is in effect would be a violation of your lease," the letter said. A violation of the lease would result in default, according to the letter.

A spokeswoman for Gov. Brown said she is aware the salon opened and violated the order. She called the re-opening "irresponsible and unfortunate" and added the business owners are putting the public at risk.

Salem Police said Tuesday they tried to contact Graham to talk about the crowd on her sidewalk but that she did not answer the phone.

They visited the salon on Wednesday and warned protesters to obey the city's emergency rule against loitering, but took no other action.

Oregon OSHA would not confirm they are pursuing action against Graham but did point out that a willful violation of their rules carries a minimum fine of $8,900.00.

Oregon has more than 24,000 licensed barbers, hair designers and natural hair practitioners. And there's no doubt every single one of them has felt financial pain from the shutdown.

The National Federation of Independent Businesses, with 300,000 mostly small companies, released a nationwide survey on that very question Tuesday.

They found 77% of their members had successfully submitted applications for the federal payroll protection program and 61% already had that money in their bank accounts.

A little less than half said they support opening the economy immediately but 54% said they would wait a month or longer or whenever health experts said it was safe to re-open. Forty-three percent said they worry a lot about getting their customers back, and 38% worry about having enough hand sanitizer when they do re-open.

Another indicator of how things are going can be found in rental units, as in who was able to pay rent last month. Despite significant worries, it turns out most paid in Oregon.

Deborah Imsee is the executive director of Multifamily NW, which represents large and small landlords. All together they have 250,000 rental units in Oregon.

"We had unpaid rents of between 5% and 18% for the month of April and frankly that was better than many of us anticipated," Imsee said.

Imsee added that about 2% typically do not pay their rent. So the number is higher than normal and bad for some landlords but over all, not that bad.

Of course there's always the chance the month of May will be awful.

"We are very worried about May," Imsee said. "There remains issues with unemployment and stimulus checks and folks that may have had a little bit in reserve that they could come up with for April. We're just very concerned May is going to be much tougher."

A little over six weeks since Gov. Brown's executive order, only one business in Salem opened up against the order, because the owner said the economic pain is just too much, but many others are hanging on -- at least for now.

The Governor has issued her executive orders for physical distancing to protect the health and safety of Oregonians during the COVID-19 public health crisis. The social and economic sacrifices Oregonians have made have prevented as many as 70,000 COVID-19 infections and 1,500 hospitalizations in Oregon (as reported by the Institute for Disease Modeling). While we have made progress, the COVID-19 pandemic isn’t over. How we move forward as a state—and the individual choices each Oregonian makes—matters. The last thing we want to do is undermine the progress we have made by disregarding physical distancing orders and creating a surge in COVID-19 cases.

The Governor’s Office is aware that some businesses are choosing to reopen prematurely, before appropriate safeguards are in place for their communities.

This behavior is irresponsible and unfortunate. These business owners are putting the public at risk.

A public health crisis should never be used as a marketing opportunity. As a state, and as a community, we have a shared responsibility to protect our friends, neighbors, and loved ones from COVID-19.

To be clear, the Governor expects businesses that are prohibited from operating (under paragraph 2 of her Executive Order) to remain closed––for the safety of employees and patrons alike––until orders have been lifted and it is safe to begin gradually reopening, with appropriate safety measures in place.

Violating the Governor’s orders under the current state of emergency is a Class C misdemeanor (for which the penalty is up to 30 days in jail, a fine of up to $1,250, or both). This applies both to the business owner and their patrons. However, throughout this crisis, local law enforcement’s first focus has been to work with members of the public to educate them about complying with distancing measures. During a public health crisis, we want Oregon law enforcement officers to be focused on urgent public health and safety needs. Criminal penalties will be a last resort, and law enforcement will seek voluntary compliance first.