Neighbors around the park told KING 5 they called the police several times over safety concerns related to the homeless encampment, only for little to be done. 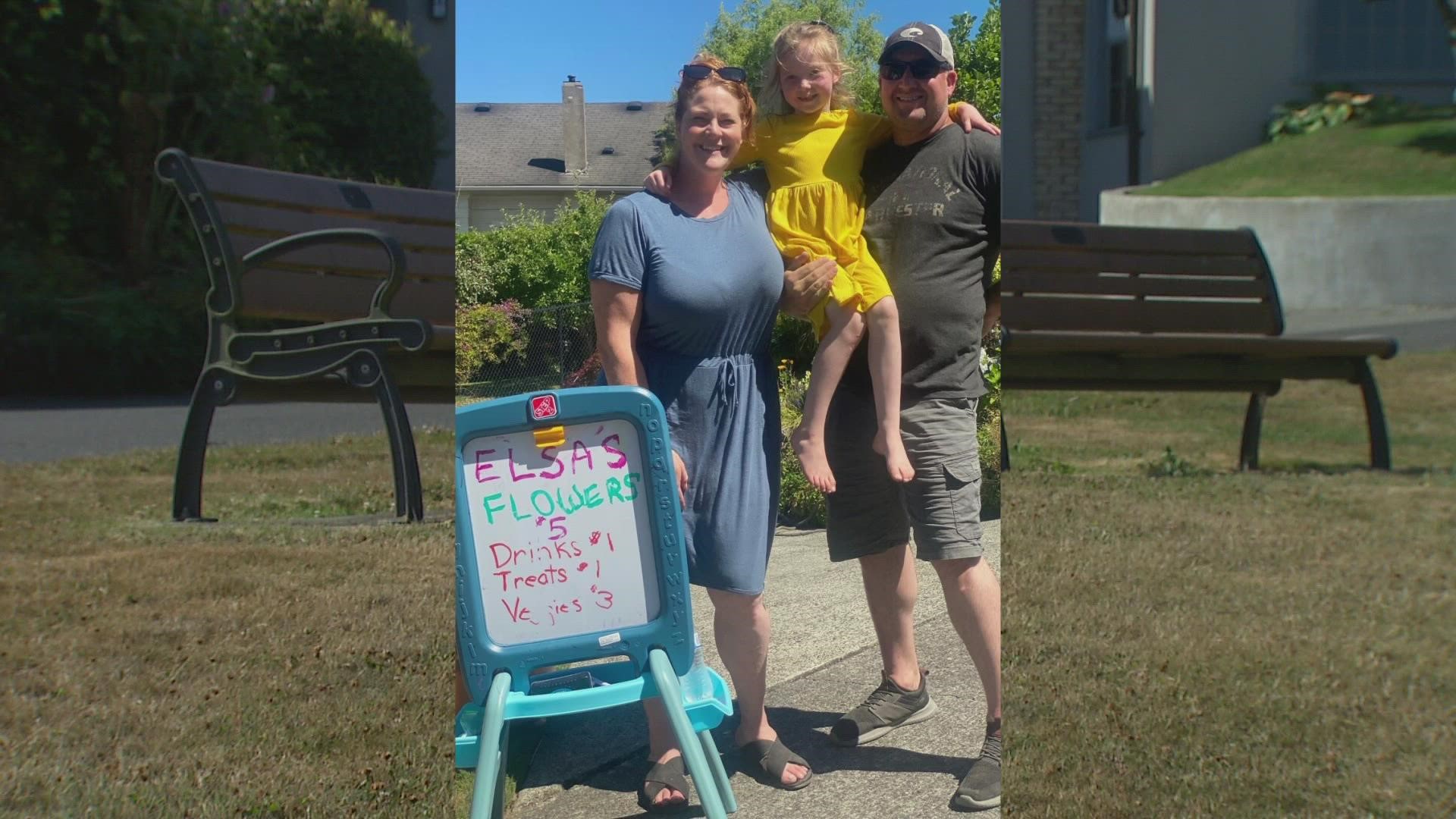 EVERETT, Wash — An Everett neighborhood is confused at the city’s priorities after a 7-year-old girl’s lemonade stand was shut down in Rucker Hill Park while complaints over a nearby homeless encampment have gone unaddressed.

“It’s so much fun!” Elsa said. She sold drinks, treats and flowers at her stand until one day her business was shut down due to a complaint.

“There was a wicked witch who called the ranger,” Elsa said, referring to a neighbor who complained to the city’s parks department.

A park ranger showed up last Saturday and told Elsa and her grandmother, Cherie LaMaine, to close up shop. According to the pair, they were told the city doesn't allow people to peddle products on public property.

"I was like, are you gonna shut it down?" queried the youngster.

"The ranger seemed really chagrinned," Cherie LaMaine said. "He was very nice about it. He even took a picture with us, but he told her she had to move immediately."

The situation angered neighbors who said they were surprised the city would take the time to shut down a lemonade stand while a nearby homeless encampment continues to cause problems in the community.

Everett has come under fire for its homeless response in recent months after instituting a “no sit, no lie” ordinance on a section of Smith Avenue that prohibits people from sitting or lying down for a stretch of 10 blocks.

The ordinance displaced a large homeless encampment forcing many residents to set up different encampments in other parts of the city. Homeless advocates argued the city’s response was inadequate, and residents weren’t offered sufficient avenues into permanent housing.

"They're just kicking the problem down the road," said Penelope Protheroe, organizer of Everett's Angel Resource Connection in reference to the “no sit, no lie” ordinance.

In the middle of KING 5’s interview with Cherie LaMaine and Elsa, a naked man walked out of the woods and into the park.

LaMaine reported the incident to 911. "We have homeless people coming through here all the time," she told the operator, "but this is really bad. He's totally naked."

Everett police responded within a few minutes. The man was later spotted at a homeless camp a few blocks away.

Elsa and her grandmother retreated to their backyard after the encounter with the naked man. Elsa passed out Oreos and drinks in fancy cups. Their attitude: when life gives you lemons, throw a tea party.

"She has handled it really well, which makes me happy," LaMaine said. "But we need a better response to the things that are really dangerous. Leave the little kids alone for heaven's sake. Let them have their lemonade stands!"

KING 5 reached out to city officials to explain the reasoning behind shutting down the stand and allowing the homeless camp to remain. City spokesperson Kimberly Cline said no one was available to comment on Friday.