Around 100 people gathered for a rally outside the administration building on the OHSU campus to support the woman that filed the initial lawsuit. 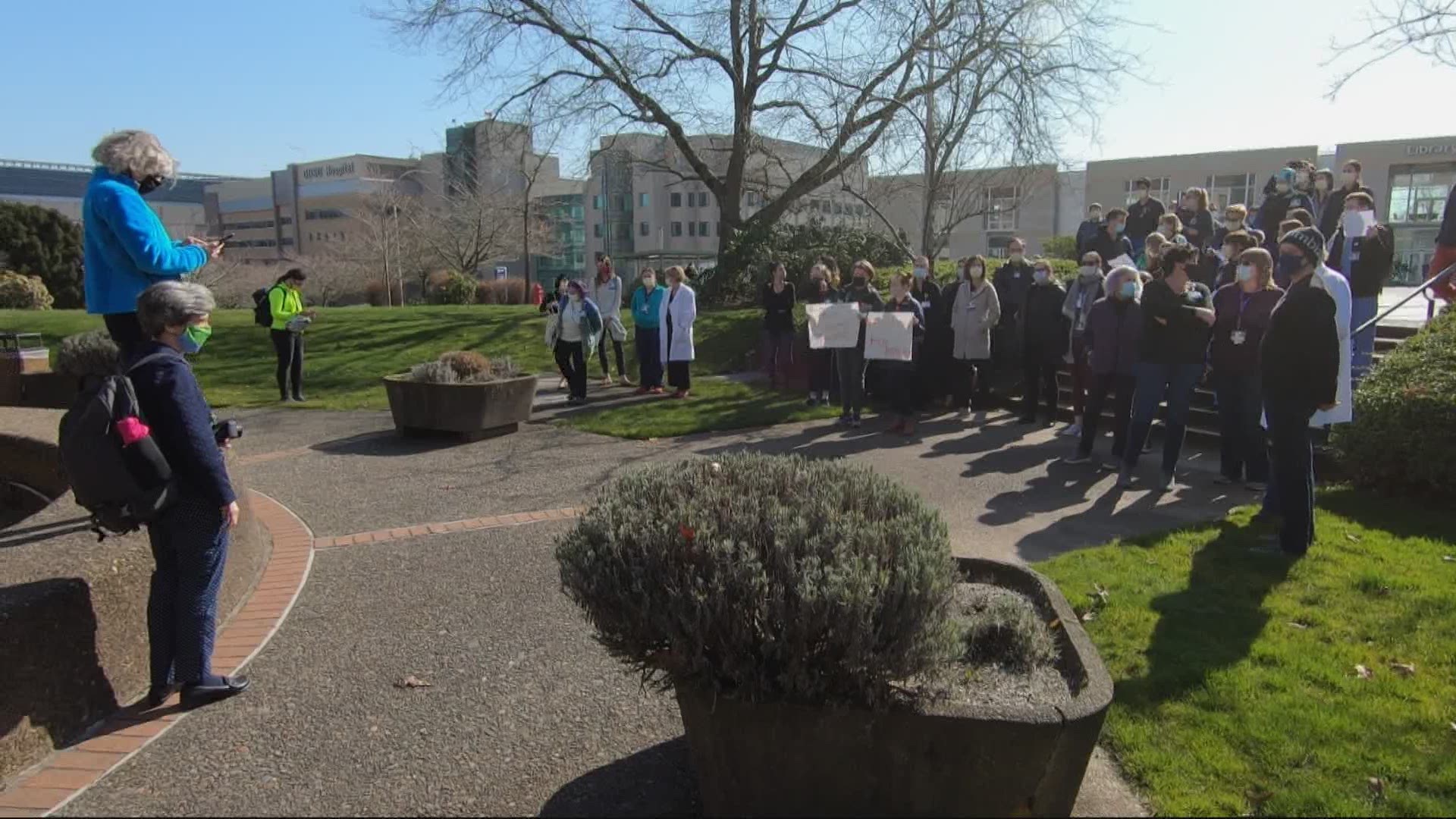 WARNING: This story contains graphic details that may be triggering to sexual assault survivors.

PORTLAND, Ore. — A lawyer for the woman who filed a lawsuit against Oregon Health & Science University (OHSU) and Dr. Jason Campbell, who became well-known for his viral dancing videos on TikTok, says more women have come forward with similar allegations since the lawsuit was filed earlier in the week.

"Several of the cases, he would trap them in a room and turn them around and press his erection against their backsides. He did that to at least two women," said Kim Sordyl of Sordyl Law. "He would grab their hands and put it on his penis and say, 'If you want help with work, you know what you have to do.'"

On Wednesday outside MacKenzie Hall on the OHSU campus in Southwest Portland, a group of about 100 people gathered to show support for the woman in the lawsuit.

"For people to finally side with her, listen to her, believe her, it's incredibly powerful," Sordyl said.

The rally was organized by Dr. Sue Aicher, who has worked at OHSU for 20 years.

"I think for many of us, her story just really resonates and we feel like it's time for real action at OHSU," Aicher said, addressing the crowd. "This needs to be a safe work environment for everyone."

RELATED: TikTok Doctor being sued for sexual assault, harassment while at OHSU

Aicher said she wasn't surprised to learn of the lawsuit or the allegations in it.

"I think the part that shocked me the most was this was a flagrant assault and nothing was done."

"If they can't stop sexual assault, then how do they stop harassment and intimidation and all the other stuff that comes with it?" Aicher said at the rally.

Campbell no longer works at OHSU and has since moved to Florida. He took a position at the University of Florida College of Medicine but has been placed on administrative leave.

In a new statement released late Tuesday, OHSU said Campbell was removed from his clinical duties after the health system received the plaintiff's complaint on April 17, 2020.

Campbell resigned in lieu of a dismissal hearing on October 23, 2020, after an investigation "substantiated" that Dr. Campbell violated OHSU’s harassment policy and code of conduct, OHSU said.

OHSU said it reported to the University of Florida that Campbell had violated the health system's harassment policy and code of conduct.

Read the full statement below:

OHSU does not condone behavior as described in the lawsuit. We are continuously working to evolve our culture, policies and practices to provide an environment where all learners, employees, patients and visitors feel safe and welcome. We take our role seriously in being part of the change that needs to happen across our country to end discrimination and power dynamics that allow for harassment. We remain committed to these ideals and will continue to prioritize them as a public leader in health care, education and research.

OHSU’s Affirmative Action and Equal Opportunity department received the plaintiff’s complaint April 17, 2020. Following an initial assessment of the complaint, Dr. Jason Campbell was removed from clinical duties and excluded from campus or contact with the plaintiff shortly thereafter, consistent with our standard protocols. Following an investigation, which provided the plaintiff and Dr. Campbell an opportunity to be heard and substantiated that Dr. Campbell violated OHSU’s harassment policy and code of conduct, Dr. Campbell was referred for dismissal. He resigned in lieu of a dismissal hearing on October 23, 2020. OHSU subsequently reported our findings that Dr. Campbell violated our harassment policy and code of conduct to the University of Florida.

RELATED: 'TikTok Doc' placed on leave by Florida hospital after allegations of sexual misconduct while at OHSU