Some may not even realize Oregon has a state song. Many who do have been trying to get it changed or replaced for years. 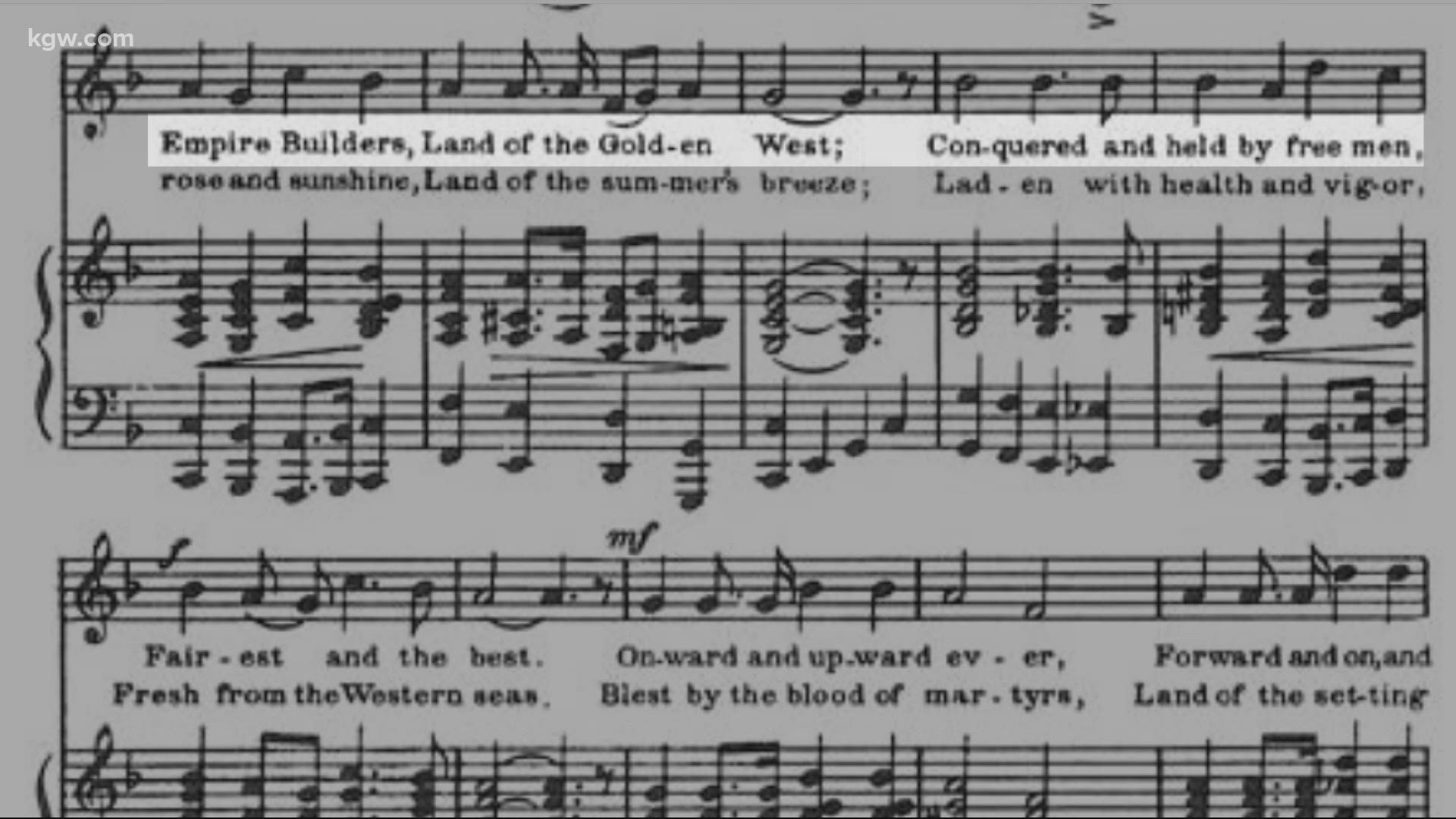 PORTLAND, Ore. — An effort is underway to change Oregon's official state song. Many believe some of the lyrics in "Oregon my Oregon," are racist and on the wrong side of Oregon's history. Written in 1920 by John Andrew Buchanan, "Oregon my Oregon" was the winning entry of a state song contest. Some of the controversial lyrics include this stanza: "Land of the empire builders, land of the golden west; conquered and held by free men, fairest and the best." The line, "Blest by the blood of martyrs" is also controversial.

“In the 1920s, not one person from the BIPOC community was allowed to submit songs and they weren't able to vote on the song,” said art activist Crystal Akins. At the time the song was written, Oregon was a "whites only" state, with exclusionary laws. "This really is an opportunity to educate yourself," Akins said.

Last fall, Akins helped launch the Oregon State Song Contest. She wants everyone from kids to professional musicians to submit entries for a new state song. "We want everyone to get involved," Akins said. "There's place for everyone in this contest."

Right now, Oregon lawmakers are considering two pieces of legislation that address Oregon's state song controversy in different ways. House Bill 2329 aims to replace the old song with a new one, chosen through a public process. The bill, which is sponsored by Rep. Andrea Salinas (Lake Oswego) happens to align with Akins' idea for a new song contest.

"The movement to re-write 'Oregon my Oregon' is just a blip in the battle for racial equity in our state," Salinas said Tuesday during a House Committee on Rules public hearing.

By email, Salinas told KGW she sponsored the bill in response to a request from a constituent to take action against the state song. "Some of its lyrics are clearly rooted in white supremacist sentiment, with references to colonialism and slavery," Salinas said.

Rep. Sheri Schouten (Beaverton) is sponsoring House Concurrent Resolution 11, which aims to re-write the questionable lyrics while preserving the historical music. Reached by phone, Schouten told KGW, "Rather than reinforcing racist history, we need a song Oregonians can be proud of and sing right away."

Schouten’s resolution is in response to a years-long effort by Oregon musician Amy Donna Shapiro to modify the state song. Shapiro wrote these new lyrics to replace the controversial ones: "Land of majestic mountains, land of the great northwest; forests and rolling rivers, grandest and the best," and "Blessed by the love of freedom."

"This has been a decades-long project for me," testified Shapiro during Tuesday’s hearing. "This is something we can do right now to make life better in Oregon. I'm excited and very grateful to be part of this historic moment."

Whatever lawmakers decide, Akins said she will move forward with her Oregon State Song Contest effort to create a new song; one she hopes will fully represent the future of Oregon, rather than its past.