What's the latest on the outbreak of vaping-linked illnesses?

While the FDA warns against using THC vaping products – along with modifying or adding any substances to products – not all cases are linked to those markets. 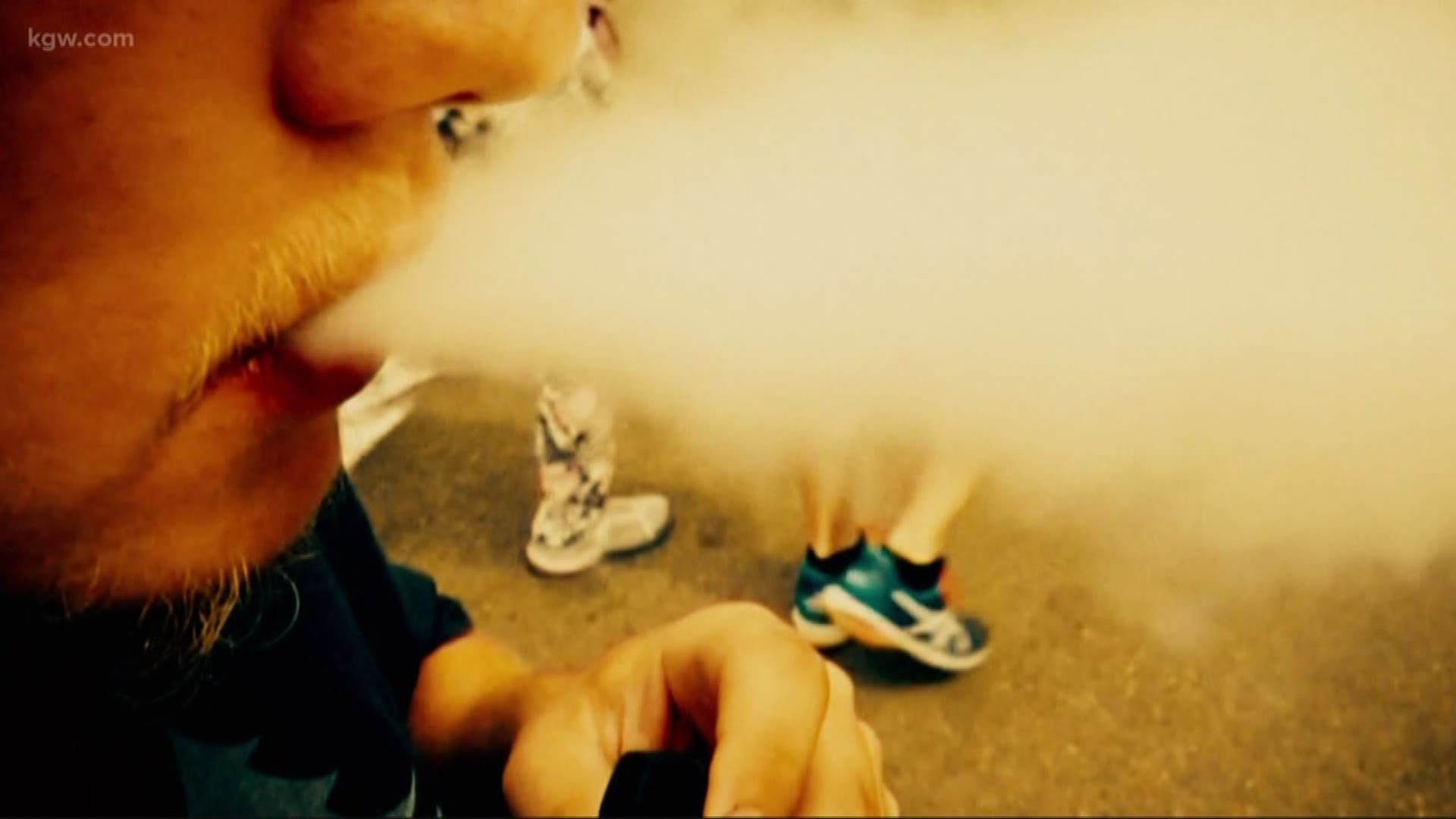 Public health officials are still investigating but say a teen spent four days in the hospital with acute respiratory failure after he reported vaping nicotine and a product with saffron.

"It’s quite possible this represents the tip of the iceberg with respect to the type of lung inflammation and lung damage that vaping may cause over the long term. We really don't understand long term health impacts at this point,” Dr. Jeffrey Duchin, Seattle & King County public health officer, said in a press conference in Seattle.

RELATED: Teen vaping: Where are kids getting e-cigarettes?

More than half the states in the U.S. are reporting a serious sickness with a confirmed link to vaping.

KGW spoke with Dr. Tom Jeanne of the Oregon Health Authority about the deadly case here in Oregon. OHA says that individual was vaping THC oil before they died. However, they haven't conclusively linked any product or determined if it was contaminated or modified.

"There are some real risks to vaping. There is a concern of toxic chemicals that can cause cancer, toxic metals in these devices that are inhaled and, again, nicotine addiction is a real concern, especially for youth. And we really don't have long-term studies at this time on the safety of vaping in general,” Dr. Jeanne said. “Until we figure out what’s going on here we can't tell you which products specifically are going to cause even this really severe illness. So we encourage everybody to not vape.”

People who died in Minnesota and California were also vaping THC before they died. Health officials in Kansas, Illinois, and Indiana haven't released details about their cases.

Many people are reporting vaping THC while only a minority said they vaped just nicotine.

The U.S. Food & Drug Administration reports that in most THC samples, investigators found Vitamin E acetate, which a lot of black market sellers use as a thickening agent. The FDA says it’s often used on people’s skin or as a supplement but it’s dangerous if breathed in.

RELATED: VERIFY: What's the latest on the vaping epidemic?

Some people are under the impression that all of the sicknesses are caused by people buying THC products off the street.

While the FDA is warning against using THC-containing vaping products – along with modifying or adding any substances to products – not all cases are linked to those markets and it’s unclear how many are.

In the case of the Oregonian who died, they bought THC products at two OLCC-licensed cannabis dispensaries.

A 25-year-old man KGW interviewed earlier this week who says he got “vaping toxicity” bought his THC and nicotine products legally.

RELATED: Portland man shares warning about vaping after being hospitalized

In the press conference in Seattle, King County's public health officer shed light on what he thinks is going on.

“We know e-cigarettes and vape devices contain potential toxins - a large number of potential toxins - and there are no long-term safety studies on e-liquids. These ingredients, many of which are deemed safe by the FDA, are deemed that way for ingestion, not for smoking; they get heated up and combined in many ways that result in unanticipated adverse health effects,” Dr. Duchin said.

“My opinion: it’s likely that many adverse reactions have been happening but haven’t been recognized and with increased scrutiny we’re recognizing more. However, I also believe that something has changed recently in the states reporting cases, either in the way users are using products or in the availability of specific products that have higher risk," he added.

We reached out to the Oregon Liquor Control Commission (OLCC) to find out if products in Oregon dispensaries have Vitamin E acetate. Spokesman Mark Pettinger says it's possible but not in any products they approved. OLCC tests marijuana products for pesticides, solvents and potency. But they don't test any additives that go into cartridges with marijuana oil.

They require licensees to list ingredients and provide documentation on where things come from. Based on the labels they approve, Pettinger says there are no products where "vitamin e" is listed as an ingredient. But it is possible the licensee didn't report it and, if that's the case, their license could be in jeopardy.

Pettinger says the agency may consider banning some additives and randomly testing retail marijuana products. But they're waiting to find out what exactly is causing people to get so sick before they decide.