Power lines down to the east, trees blocking the exit to the west, fire burning alongside their car, it was a terrifying end to an otherwise great Labor Day weekend. 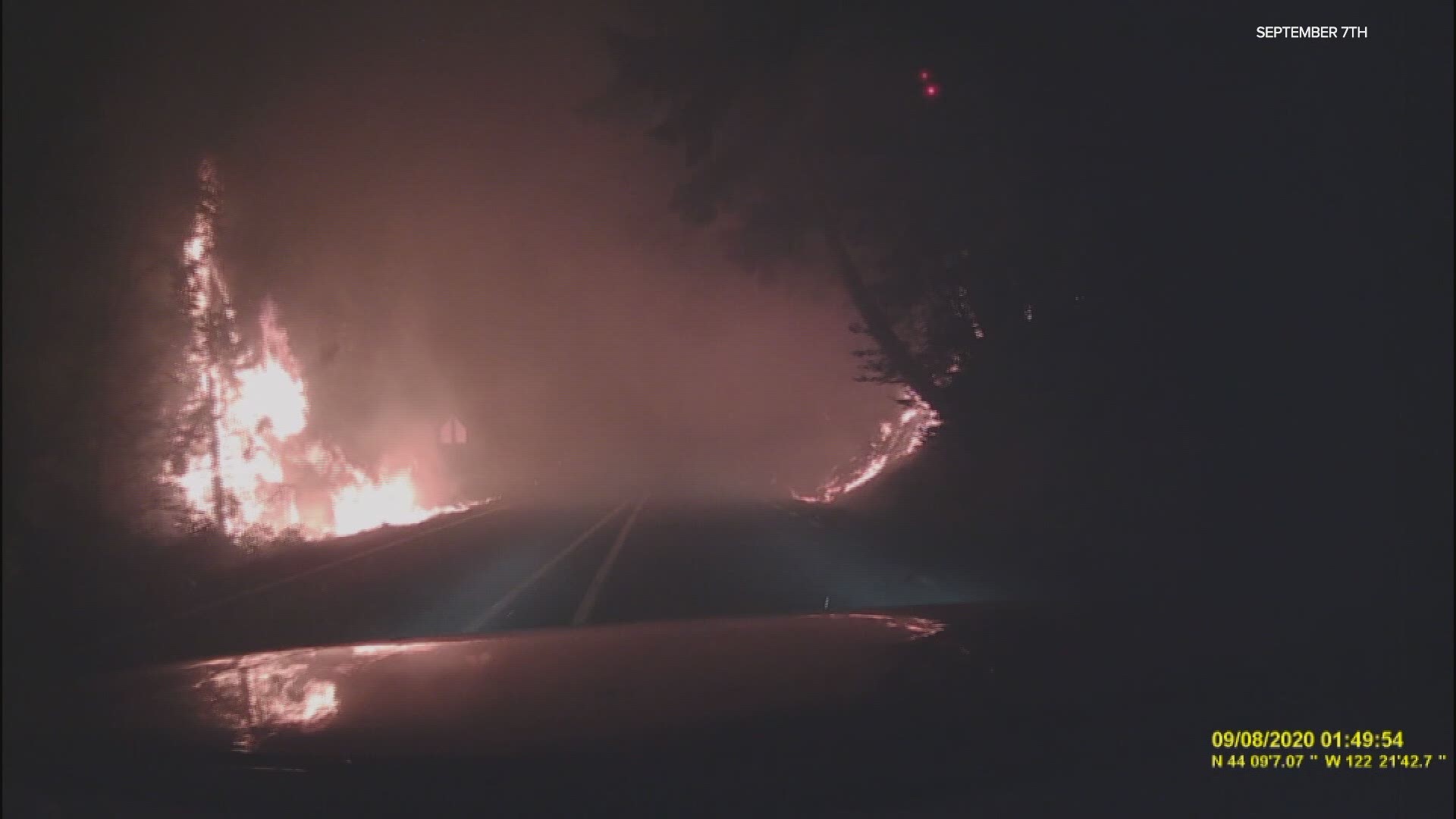 RAINBOW, Oregon — A Lake Oswego dentist and her family were some of the ones who barely made it out of the Holiday Farm Fire along the McKenzie River in Lane County. She was having a great Labor Day weekend with her husband, three kids, mom and brother in their cabins, until the wind started up that Monday night.

"We have had cabins on the McKenzie River for 40 years. So my brother and I, we're third generation," said Lisa Strauch, who owns Lake Oswego Family Dentistry. "We have lots of memories, lots of pictures, just a really long history down there."

Strauch and her family's cabins are in the town of Rainbow, 45 miles east of Eugene. They own three of the six to eight cabins on Dearborn Island. It's a turn off the highway, then over a bridge, surrounded by the McKenzie River and national forest land — one way on, one way off. And it's just a stone's throw over the water from the Holiday Farm RV Resort and wedding venue.

Credit: Lisa Strauch
One of Strauch's three cabins in her family in Rainbow, Ore.

It was a great holiday weekend with the family. Monday morning her husband left in one car with two of the kids. Then her brother headed home. Lisa, her mom, and her 2-year-old son stayed behind to hang out.

RELATED: Oregon couple who lost dream home in wildfire finds joy in what they do have

"The wind started to pick up around 4 p.m. But by 6:30, I was taking video of the winds and we were watching trees fall down all over, mostly cottonwoods," Strauch recalls.

"Then 8:00 p.m. the power goes out again, and there's texting going on from a big group of us neighbors that there are trees down. Next thing I know, I get a phone call from a neighbor who has a friend on McKenzie River Drive that heard an explosion, and 'you better hang tight.' 10 minutes later after that conversation, it was: 'you need to get off the Island, everyone evacuate the island!'"

Credit: Google Maps
Dearborn Island, surrounded by the McKenzie River\ off Highway 126, has one way on and one way off, by a bridge over the water.

Neighbors think the explosion came from an electrical box somewhere nearby. They jumped in the car to get out. Strauch drove and says she had to drive through the neighbor's yard because of downed trees. Then the only bridge off the island was blocked by a smaller tree so Strauch gunned the car up and over it.

"We jumped onto 126 and at about milepost 42, when I looked to the left there's literally a mountain on fire. We hit milepost 35 and the road is blocked with a tree down and the winds were howling again, so scary. The tree was down about seven cars in front of us," she continued.

"There were a bunch of civilians, and a bunch of guys with straps and chainsaws trying to, you know, take out the tree. But we're blocked and we know we're blocked behind us with a downed power line. We have a fire on our left a couple of miles back and we have no idea what's going on."

They get through that blocked tree with the car caravan and encountered two more before the escape was over. Strauch made it to Eugene with her mom and young son by 10:30 p.m. that night.

"The scariest part was on 126. I had called my husband and said, 'Hey, you need to call 911 in Lake Oswego, you need to tell me what to do. I don't know if I'm going to be holding him (my son) and am I running? Are you coming to get me? How do I get out of this situation?' So, yeah, I have a little acute stress syndrome going on now in terms of protecting my family. It was definitely scary."

Lisa's family has found out since that while half the island's vegetation was burned up, every single cabin is fine. She says its thanks to defensible space and clearing brush on the island. She says she'll go back to clean up and make repairs when it's allowed.

Credit: Lisa Strauch
Two other cabins Strauch and her family have owned on Dearborn Island for decades.