A family in Lake Oswego got an anonymous letter demanding they remove the sign on their home in support of the Black Lives Matter movement. 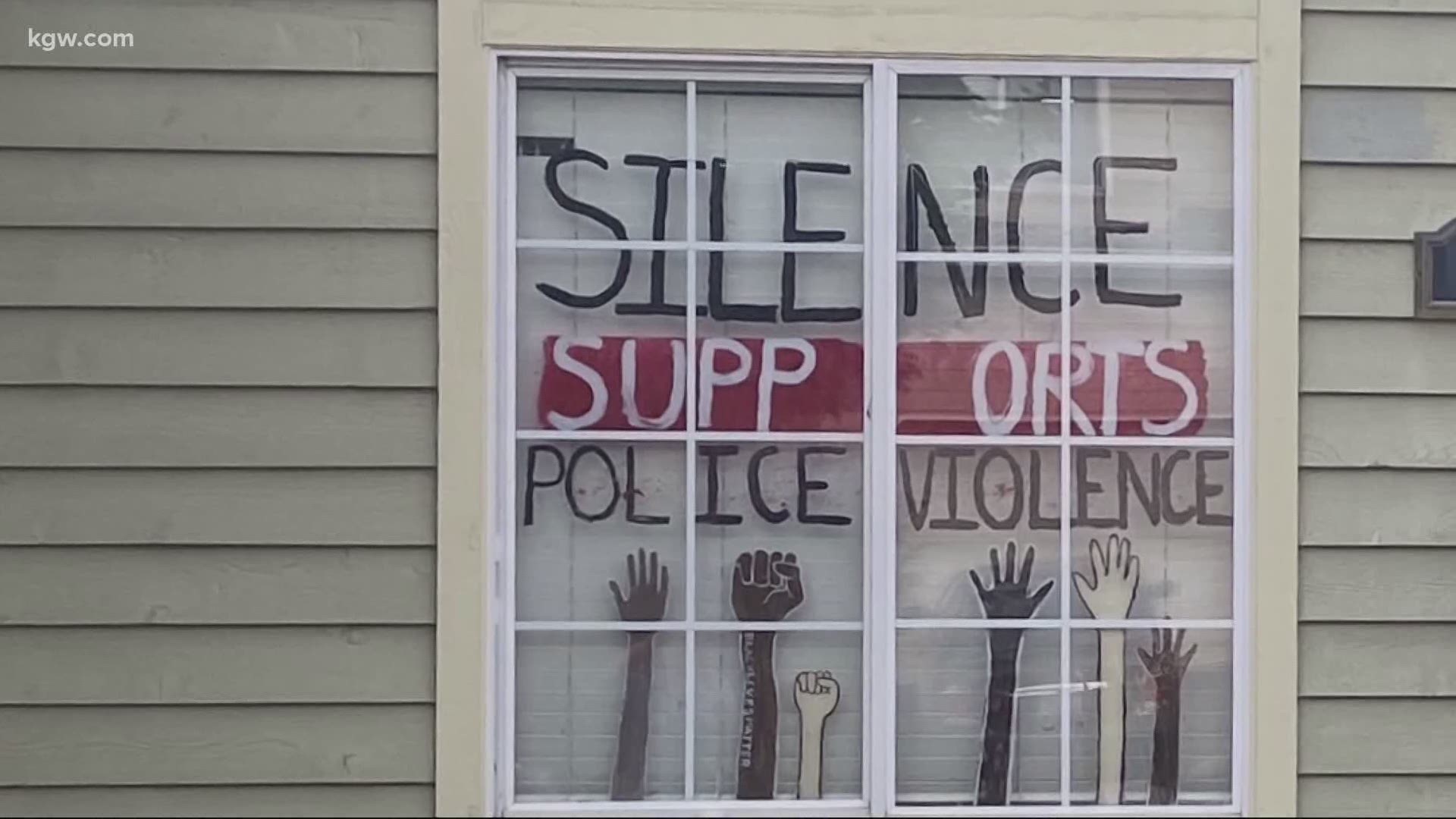 LAKE OSWEGO, Ore. — The city of Lake Oswego is calling on people to “join us in stamping out racism, intolerance, and fear” after a woman tweeted that her family received an anonymous letter from neighbors, which urged them to take down a sign supporting the Black Lives Matter movement.

The tweet has been racked up more than 40,000 likes and 10,000 retweets since it was posted Sunday. By Tuesday morning, Lake Oswego was trending nationally.

my younger sister painted a sign on the front window of our house to show our support of the #BLM movement, and was sent this in the mail from one of our neighbors. 100% on brand for lake oswego 🤮✨ pic.twitter.com/TFryIAU5Yd

In the tweet, the woman wrote “my younger sister painted a sign on the front window." The sign, pictured, read “SILENCE SUPPORTS POLICE VIOLENCE," with images of white, Black and Brown hands reaching up and making fists.

It begins, “We, your neighbors, appreciate that you have a strong political and social justice viewpoint…” then goes on to say “We believe you’ve made your point.”

It says, “We have three homes on our street that are trying to sell for the best price possible … your sign is driving down interest.”

The letter continues, “Homes are not made to be build boards [sic] for our opinions … Thank you in advance for caring enough about the people you live side by side (especially with different viewpoints) by removing your sign.”

"I didn't think everyone would side with me but I was very shocked by how open it was, like we value our property over this statement that everyone should agree with," said 15-year-old Nandita.

"I felt like this is something I could do with my time, that would take my mind off the frustration and anger and make me calm down a little bit."

Nandita says her family and friends have encouraged her to keep the sign up and not give in to her neighbors.

"They were like, 'No, this is insane, you did absolutely nothing wrong," she said. "It's your property and your First Amendment right and they shouldn't be telling you what to do.'"

In an interview Tuesday, Marcus Mundy, executive director of the Coalition of Communities of Color, said he hadn’t seen that specific letter yet.

That said, the sentiment is nothing new.

“I'd seen others, I'd heard reports from friends of mine and colleagues who had gotten letters or in their neighborhood or next door listing … with their anonymous, cowardly protests about people's signage,” he said.

“You do have overt racists, and then you have people who just don't understand,” Kheoshi Owens, CEO of Empress Rules Equity Consulting. “They're just uninformed. And like, and I just wonder what's the level of education that this person had when they wrote this? And I'm not talking about grades. I'm not talking about college. I'm talking about just consciousness around history."

“That really has that impact of, you know, almost equating that there is one right way of creating this concept of what home is,” she said. “These topics are something that they don't have to talk about at home. It really speaks to privilege, specifically white privilege, in this situation.”

To Mundy, the anonymity of these letters also speaks volumes.

“That has ever been, you know, the bastion of cowards. It's like the Birmingham bombings were anonymous. The people in the Ku Klux Klan robes were anonymous,” he said. “People that want to engage in real discussion and try to make people understand their point actually would have knocked on the neighbor's door and said, ‘Hey, I live here. You might've seen me. I'm your neighbor. Can we talk about this?’”

Tuesday afternoon the city of Lake Oswego issued a statement on the letter.

The city manager wrote they stand in solidarity with the family who painted the sign, adding "We stand for anti-racism."

The statement concluded, “Please join us in stamping out racism, intolerance, and fear in Lake Oswego."

A Message from Martha Bennett, Lake Oswego City Manager:
“This morning, we learned that a Lake Oswego family recently received an anonymous letter requesting the removal of Black Lives Matter signs from their home. We stand in solidarity with this family.
1/5 pic.twitter.com/KP5B2ZSUcJ