Eight people are dead after a plane crash over Lake Coeur d'Alene on Sunday. The Kootenai County Sheriff's Office recovered the final victim on Thursday. 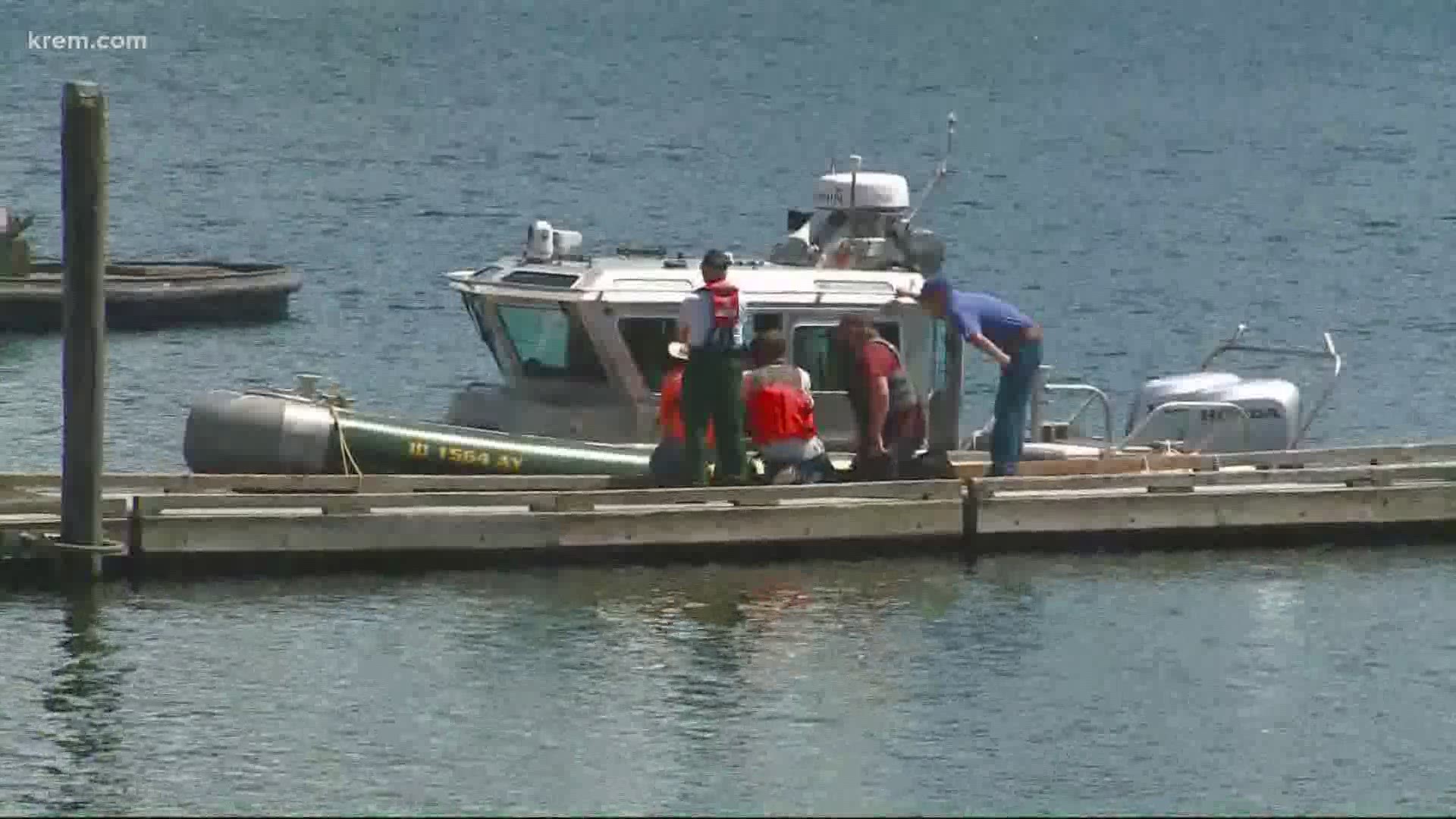 COEUR D'ALENE, Idaho — Crews have recovered the fuselage of one of the two airplanes and the last victim on Thursday that was involved in a mid-air collision over Lake Coeur d'Alene on July 5.

Eight victims have now been recovered from the lake, with no survivors from the crash.

Recover efforts are continuing on Friday and the sheriff's office said it is unknown how long it will take, although crews have told KREM's Taylor Viydo that recovery is expected to be completed this weekend.

The Loffs Bay Boat Launch and Docks have been closed to the public as recovery continues, the sheriff's office said, along with a section of the lake at the crash site.

The sheriff's office thanked the Sonar and Dive Teams and the Jake's Diving crew for their work in the recovery efforts.

Rescue crews found the last two victims of a deadly plane crash over Lake Coeur d'Alene on Wednesday evening, according to Lt. Ryan Higgins with the Kootenai County Sheriff's Office.

Only one of the victims was recovered by the sonar team. The remaining victim was found in the plane wreckage. The salvage team will focus on getting the plane out of the water in order to recover the final victim on Thursday, Higgins said.

Thursday afternoon, crews were preparing to launch a couple of barges from a boat launch not far away from where the crash happened. Their first priority will be removing the Cessna plane that crews were able to locate Wednesday night along with the two final victims.

The Kootenai County Sheriff's Office said the recovery team is hoping to be wrapped up in two days. Getting the planes out will depend on several factors and weather could be one of them. They recognize that boat traffic this weekend will pick up. They're asking people to avoid that area on the lake.

The two planes are about 100 yards apart from each other, according to the sheriff's office. The debris field is about 500 feet in diameter.

Seven bodies have been recovered since a float plane and Cessna collided and crashed into Lake Coeur d'Alene on Sunday afternoon.

Higgins said high winds on Tuesday impacted search efforts, making it hard to anchor the SONAR boat. To use their underwater equipment, the team needs to run a straight line into the lake. He said those same conditions impacted the search Wednesday.

Two of the victims were recovered at the lake surface, while four were found relatively close to the main crash scene, Higgins said. The seventh victim was recovered near the second aircraft and one victim is still in its main body.

Sun-up Bay Boat Launch has been closed to help facilitate recovery operations and authorities are asking people to avoid the crash scene.

The National Transportation Safety Board and Federal Aviation Administration have also arrived in Coeur d'Alene to investigate the crash.

The sheriff's office said crews won't be able to recover every single piece of the wreckage. They were told that the NTSB hopes to recover just over three quarters of all the wreckage.

There is no fuel or oil leakage from the crash, and everything on the surface has dissipated since the crash, according to Higgins. Any oil that comes up as part of the recovery process will likely be contained by booms.

Any witnesses with video or photos of the crash are asked to contact the Kootenai County Sheriff's Office at 208-446-1300.

WATCH LIVE: The Kootenai County Sheriff's Office is holding a press conference on the fatal plane collision over Lake Coeur d'Alene on Sunday. Six victims have been recovered.

A float plane operated by Brooks Seaplane, a company stationed at the Independence Point dock that offers scenic flight tours of Lake Coeur d'Alene, was one of the two planes involved.

Passengers on the float plane included three children, two adults and one pilot, according to Higgins.

Another man on the plane has yet to be identified.

RELATED: What we know about the victims of fatal Lake Coeur d'Alene plane crash

A spokesperson for Oswego Lake Country Club confirmed on Monday that Frederickson, a golf professional, and the children were killed in the crash.

April Upchurch, Frederickson's wife and mother of the three children, told KREM that her family was "taken too soon in an unimaginable way." She asked people to keep her family in their prayers and not to waste a single minute with their loved ones.

A memorial is in place at the float plane's stall with flowers left for the victims and a book for people to share their favorite memories of Brooks Seaplane or those who lost their lives.

RELATED: How to stay safe while float planes take off from Lake Coeur d'Alene

The second plane was a Cessna from Lewiston but flew out of Felts Field in Spokane. It was carrying two people who family members have identified as Jay Cawley and Kelly Kreeger.

Both planes have been located in 127 feet of water by the Kootenai County Sheriff’s Office Sonar Team. Higgins said crews have not determined when they will be able to recover the planes.

Witnesses said the two planes hit each other above the lake and then fell into the water.

“It was a cracking nose – a loud crack," said Grant Marchant, who witnessed the crash.

Marchant said he then saw what appeared to be one of the planes falling out of the sky.

Angie Bishop described what she saw as a "big eruption of flames."

"...You could just see debris falling with it and you can tell it was obviously an airplane in the sky. But it fell to the ground and a huge loud noise followed it," she said. "t was pretty terrifying. We were all standing at the beach watching it and completely shocked at what we saw."

The sheriff's office is asking people to be patient, as this will be a multi-day operation. They will be using a barge to lift pieces of the plane out of the lake. 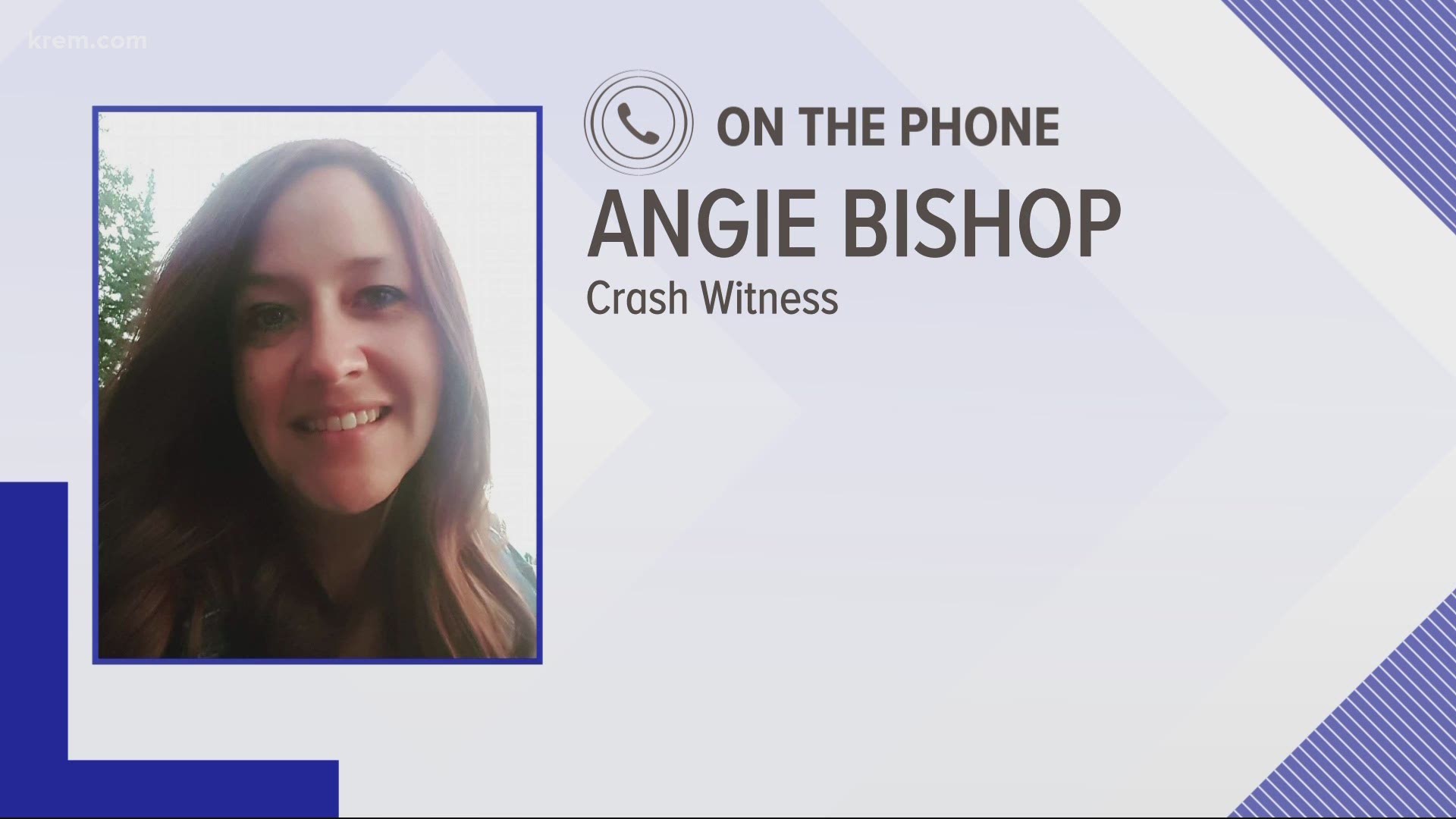