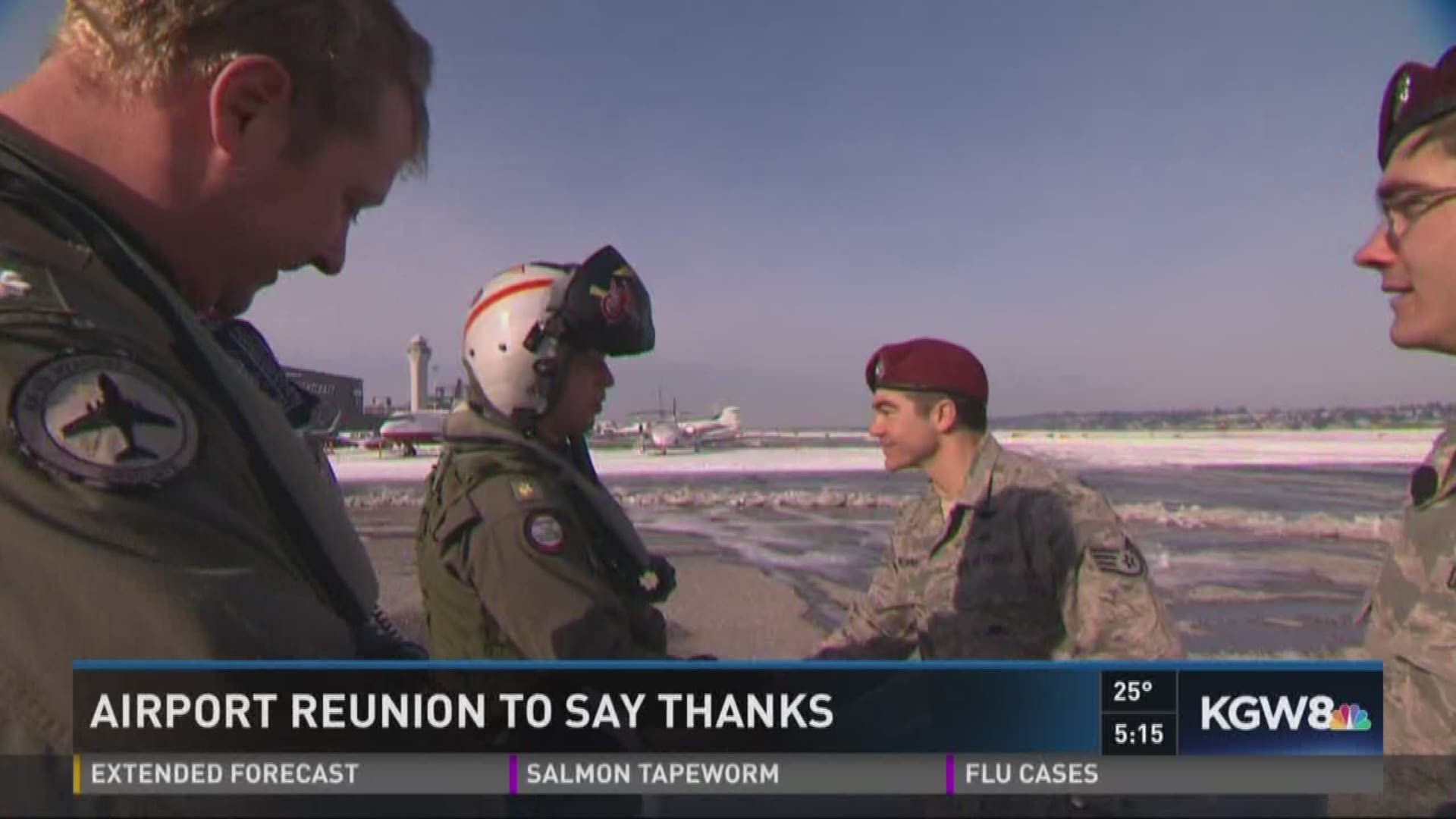 They appreciated the help of two Air Force Reservists stationed with the 304th Rescue Squadron. The pararescue jumpers (PJ's) helped save lives during an awful aircraft malfunction at the naval base on Whidbey Island.

On December 16, 2016, three Navy F-18 jets warmed up at the Whidbey Island naval base alongside Puget Sound.

“During the start sequence, one of the aircraft experienced an over pressurization,” said Commander Jon Crawford.

With the pilot and weapons officer inside, the pressure built to incredible, deadly levels.

“To the point where the cockpit failed and it exploded outward,” he said.

Commander Crawford said that has never happened before to an F-18.

The two on board, members of his squadron, were badly hurt and barely alive. He's not revealing their names.

“The scene was unlike anything I’ve ever witnessed. Some of the stuff...yeah...a little horrific,” said Commander Crawford.

They have advanced medical training as Pararescuemen and rushed to help.

“As soon as I got in the ambulance with John, we knew this was extremely serious,” said Mellencamp.

One of the men had a traumatic brain injury, the other significant lung damage that needed fast attention. He was suffocating.

“When someone is having pressure in their chest you decompress it by putting a needle through the chest to release air so the lung can re-inflate,” said Mellencamp.

They did it again and again as the airmen were flown to the hospital.

Penne knew it was the edge of life and death.

“Yep,” he said when asked about it.

Both survived but are still too medically fragile to make this trip.

Instead Commander Crawford, leader of Naval Squadron VAQ 132--the Scorpions--flew down to thank the air force men personally.

“Not only did you do your job in an exemplary manner that day, but you saved their lives. You touched more people’s lives than you know." he said, choking up.

You could feel the depth of his love for his men and the appreciation of help when they needed it most.

“I know for a fact that having Ryan and John there that day was definitely part of that chain that enabled my buddy to be discharged from the hospital yesterday,” Crawford said.

The other patient, he said, should be out of the hospital in a couple weeks.

He brought shirts and coins and even engraved bottles of scotch, an ancient military way to say thank you.

Penne and Mellencamp shrug it off, say the thanks is not necessary, that lots of people helped. But isn’t that what you’d expect a professional to say?