'It's just, like, relief': Amtrak train towed back to Eugene after being stuck for 36 hours

Crews worked overnight Monday to clear the tracks and the train was towed by a Union Pacific locomotive Tuesday morning. 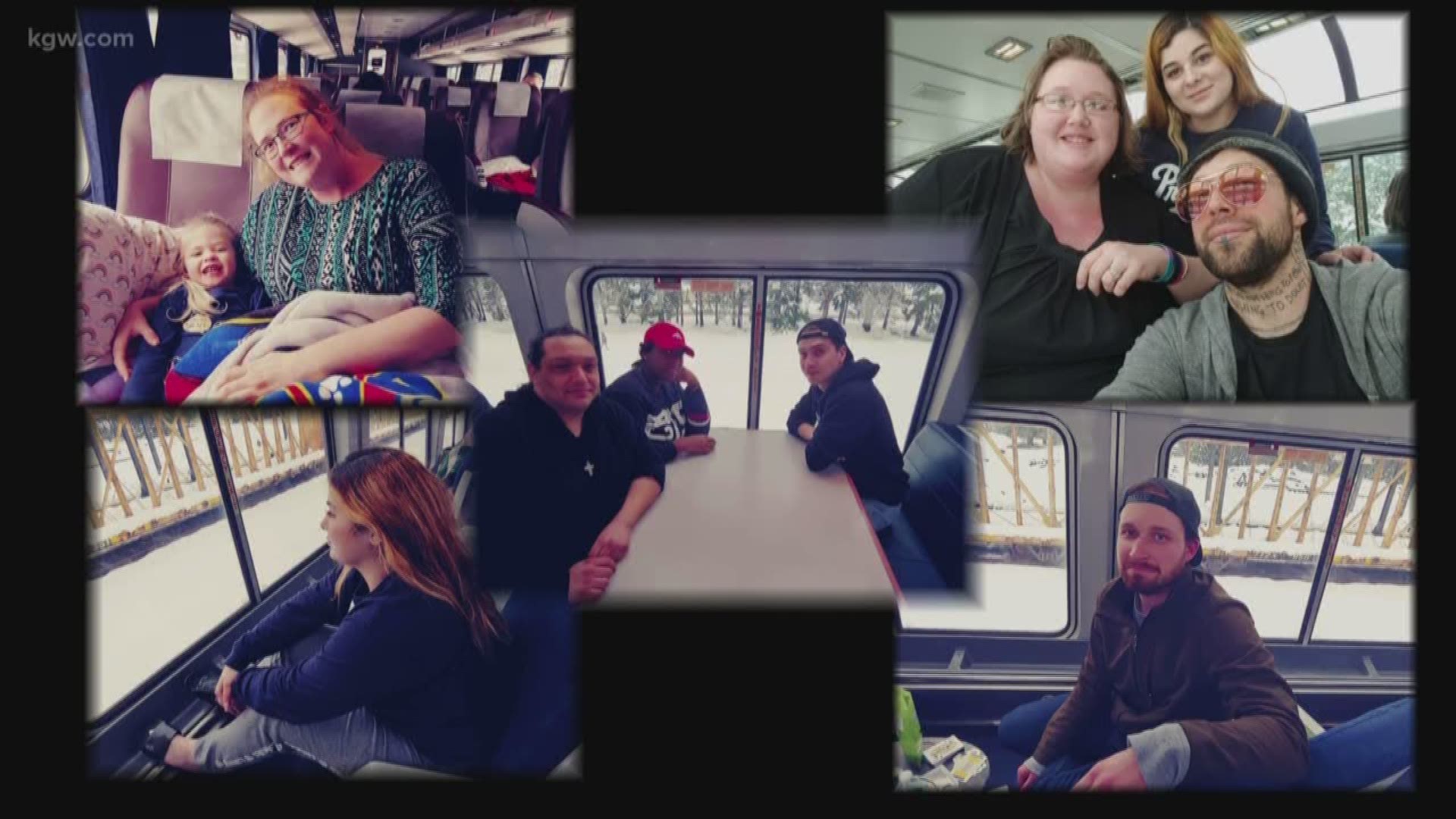 OAKRIDGE, Ore. — An Amtrak Coast Starlight train stranded 40 miles east of Eugene since Sunday night was towed back to Eugene Tuesday morning after passengers were stuck for more than 36 hours.

"It’s just, like, relief. I’m just excited to get off of here," said 16-year-old Abbie Jeffrey, one of the passengers on the train. She was headed to Klamath Falls.

Abbie’s mom said she was crying happy tears. "[I’m] relieved. I’m going get a hug from her, have her home, and have her in her bed," Patti Mensah said.

The train struck a tree on the tracks at 6:18 p.m. Sunday near Oakridge, a small town about 40 miles east of Eugene.

Union Pacific crews worked overnight Monday to clear the tracks, which allowed a Union Pacific locomotive to reach the train and start towing it Tuesday morning.

None of the 183 passengers and crew members was hurt, according to Amtrak spokeswoman Olivia Irvin, but they were unable to get off the train due to unsafe weather conditions in Lane County.

Both Jeffrey and her daughter said they wished Amtrak officials had communicated more about updates and information.

"One thing I wish they would have done is contact the parents of the minors on there," Mensah said.

Scot Naparstek, the CEO of Amtrak, told KGW it regrets the extended delay, but assured it made "every decision in the best interest of the safety of our customers during the unfortunate sequence of events."

"With local power outages and blocked roads, it was decided the safest place for our customers was to remain on the train where we were able to provide food, heat, electricity and toilets," Naparstek said.

Customers will be provided "refunds and other compensation as appropriate," according to Naparstek.

Another passenger on the train, Carly Joy Bigby, posted a video to her Facebook account in which she took a viewers on a tour of the stranded train.

Rebekah Dodson boarded the train Sunday afternoon in Albany. She expected to be in Klamath Falls by 9:50 p.m.

"(At) about 6 o’clock the train came to a sudden halt and the conductor said that they had some damage from some low-hanging limbs because of the sudden snowstorm and they were going to stop and fix it.

"About an hour-and-a-half later they couldn’t fix the train and they were going to pull up to Oakridge and try to get a maintenance crew out to fix it so we could continue on our way south," Dodson said.

Conditions continued to get worse and the track was blocked by more snow and downed trees. With no way for the passengers to travel safely on their route, the train remained in Oakridge, near the intersection of Commercial Street and Walnut Street.

Credit: Rebekah Dodson
Looking out of the stuck Amtrak train in Oakridge.

Amtrak kept the passengers on the train because Oakridge only has two small hotels and power was out in the city.

Dodson, who is a college instructor, had to cancel her Monday classes.

"So we’re in the city of Oakridge, like we can see houses, but we’re on the train. No one can get on or off. There’s two or three feet of snow on either side of us. We’re stranded," Dodson said.

"We’ve got a lot of younger people that are having anxiety attacks, there’s a lot of panic and anxiety," she said Monday.

Dodson said the train is not completely full and credited the crew members for their professionalism during this hard time.

There was food on the train and passengers were served meals Monday.

"It’s very frustrating to be 30 miles from civilization and they still can’t do anything about this," Dodson said Monday.