'It's coming back': A look at closed Angel's Rest Trail

The U.S. Forest Service said there is no opening date for Angel's Rest, other than by the end of the year. 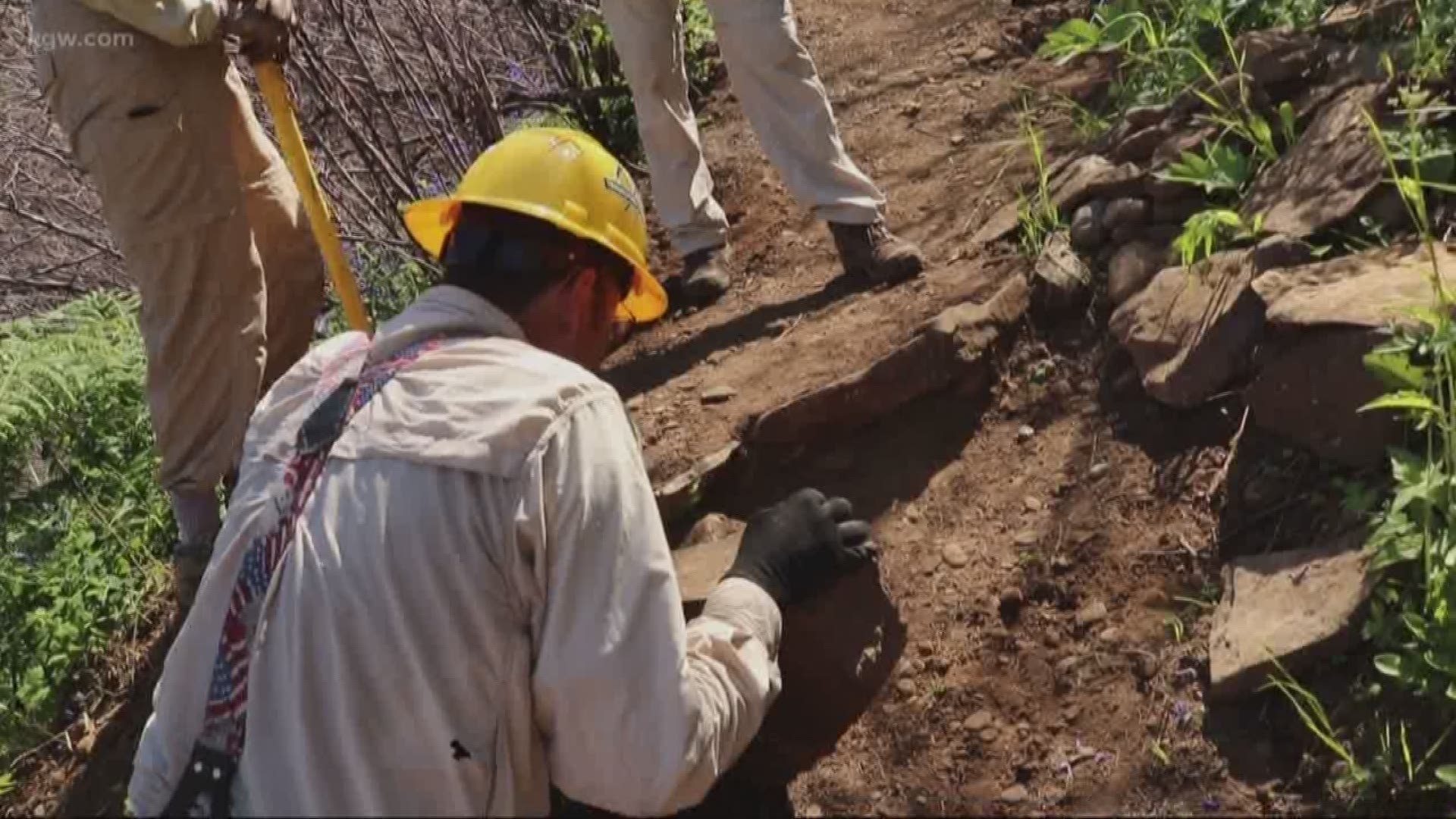 COLUMBIA RIVER GORGE, Ore. -- Angel’s Rest Trail is probably in better shape now than at any time in recent memory. And the popular trail in the Columbia River Gorge is still closed with no opening date.

The trail is just a 45-minute drive from Portland and on a normal year, one of the most heavily used in the gorge. But this is far from a normal year.

Many of the most popular hiking areas are closed as a result of damage from the Eagle Creek Fire that began Labor Day weekend of 2017.

Angel’s Rest runs roughly three miles in and 1,500 feet up to a rocky bluff at the west end of the gorge and features stunning views.

I got special permission from the Oregon Department of Parks to hike the part of the trail controlled by the state. The federal government, in the form of the U.S. Forest Service, controls the very top portion of the hike. I was not able to cross the state boundary.

Photos from the Angel's Rest trail

Photos from the Angel's Rest trail

On the lower portion, the trail is in excellent shape and it’s hard to tell it was impacted at all.

One thing you would notice is all the grass growing up through the pathway. The lack of foot traffic is noticeable said Steve Kruger, executive director of Trailkeepers of Oregon.

“Usually this trail is so heavily traveled that you have that natural maintenance of the vegetation being trampled down by those million feet or two million feet by folks working to get up to the view point,” he said.

Without the crowds, volunteers from Trailkeepers are able to fix long time problem spots.

In one section, they built a rock retaining wall to support a switch back and stop erosion near a large tree.

In another section, volunteers are on hands and knees wrestling a boulder in to place to smooth out a step near a different switch back.

Related: What trails are open now in the Gorge 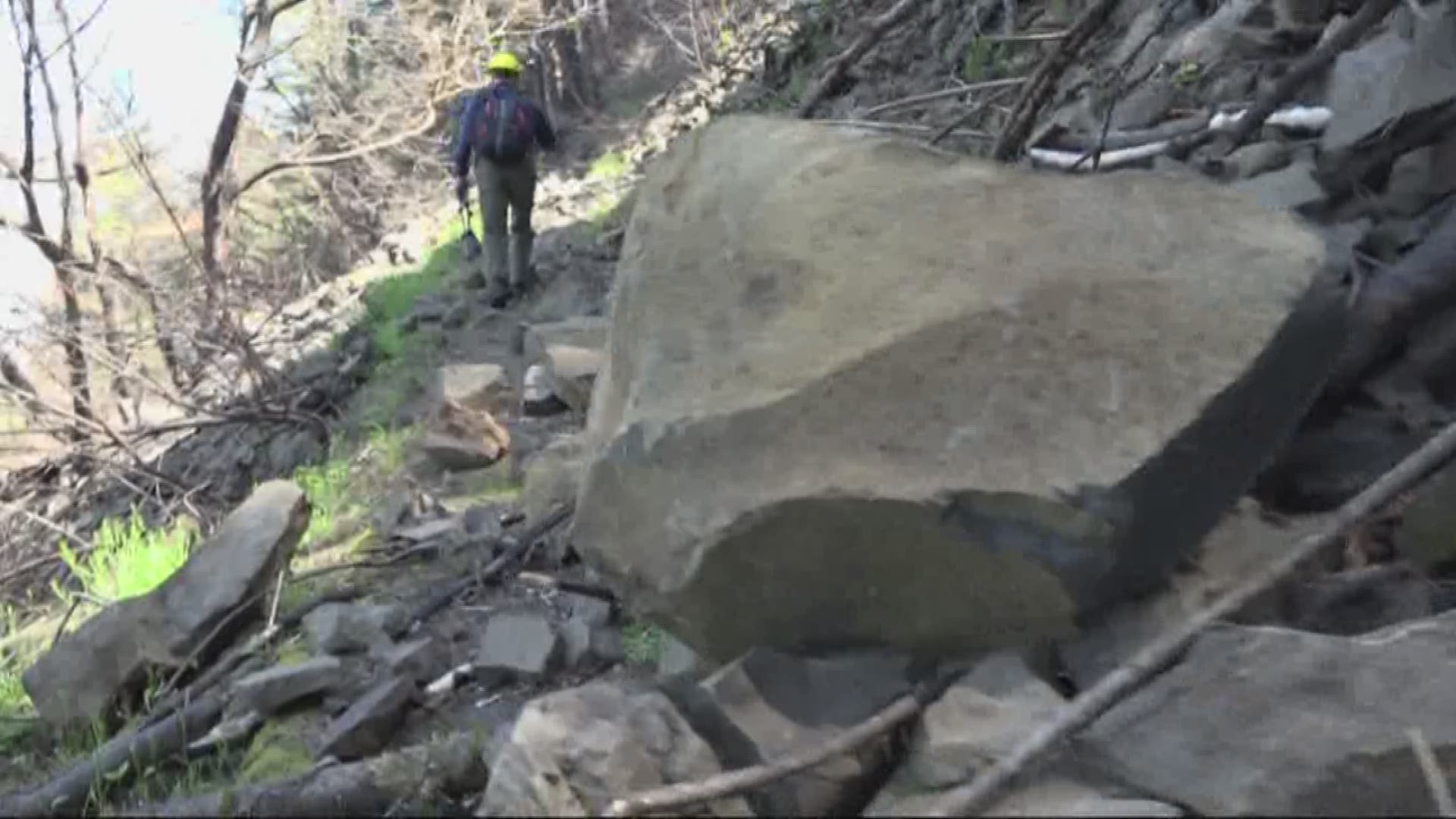 “What I was hoping we could do is bury this down so its two-thirds in the ground and put another one next to it,” said volunteer leader Pat Keavney to his team of two others.

Keavney said the destruction of leafy trees higher on the trail was just horrendous. And then he looked out at the views.

“We have vistas that are just wonderful everywhere we look now. And at the same time, the flowers have been following us up the hill as we work. And the flowers are more gorgeous than they ever were before,” he said.

Indeed, the purple Larkspurs stand out among the black trees on the upper part of the trail.

Overall, the trail is in such great shape it’s hard to spot any dangers leftover from the fire.

The volunteers I met were working not on damage repair but on long neglected projects of trail maintenance. And they all seemed thrilled at the way nature is returning to the hillsides.

“As we've all said, it’s unfortunate that it was man-caused, but it’s coming back and it just makes me happy to see,” said volunteer Elaine Keavney.

You can't hike it yet but hopefully it’s comforting to know the white Cow Parsnip is flourishing and the orange Honeysuckle is out in force along with the purple-blue colored Larkspurs.

Angel's Rest was scorched and battered but in some respects, is now even better than before.

The U.S. Forest Service said there is no opening date for Angel’s Rest, other than by the end of the year. A spokeswoman said it needs to remain closed for now to keep people from hiking to the top then connecting to other trails, which are still closed and dangerous.