Despite a rat infestation and once catching on fire, the city has no plans to get rid of a trash pile that spans nearly half a block. 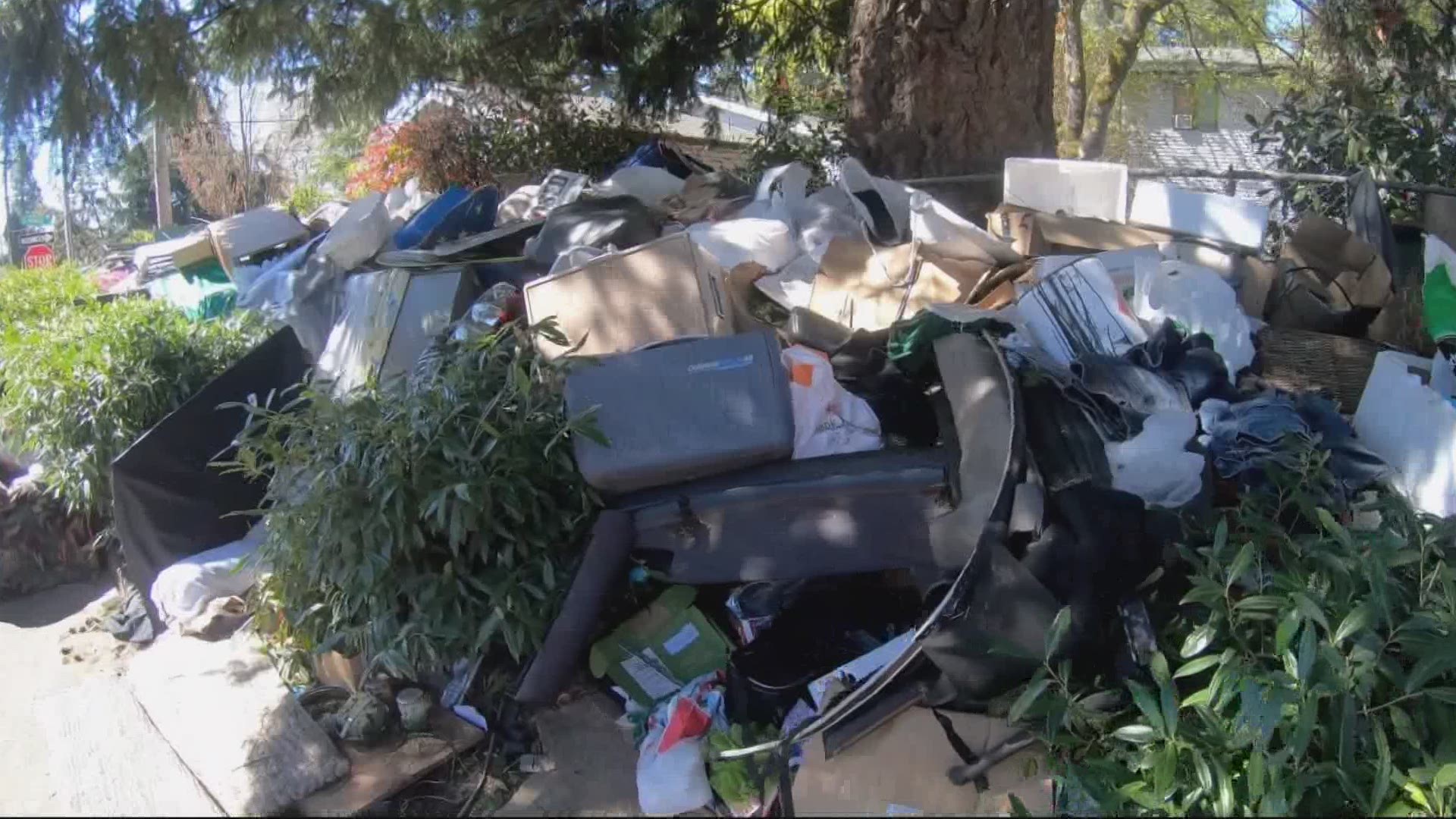 PORTLAND, Oregon — There has been a pile of trash at the corner of Burnside and Northeast 160th Avenue for nearly a year. It has caused a rat infestation and even caught fire at one point, yet the city has said it doesn't meet the criteria for removal.

Random items, including a car door and baby items, started piling up months ago and now span nearly half a block, according to Merry Skuse, who lives in an apartment complex nearby.

"It's been growing more and more but it's been here for a year," said Skuse. She said that she had a rat on her patio that she attributes to the trash pile's infestation. She said that a neighbor had a similar experience.

However, the problems don't stop there. The trash pile at one point caught fire. Hazmat crews removed some used syringes —but the rest of the trash remained.

"Many of us in the neighborhood have called the city and ODOT and other agencies to try to get help to get the pile removed," said Skuse.

KGW reached out to the city of Portland for information regarding this site. It said crews have been sent out four times in the past month to pick up garbage. But because the site is considered a low health and safety risk, it doesn't meet the criteria for removal.

The city also said that they cannot collect the items because a person lives in a tent among the trash and the items are his personal property. The neighbors say that the trash pile isn't actually comprised of his belongings.

"That is garbage. He goes around the neighborhood and collects out of everyone's yard," said Skuse. "He lives in this tent right here and I guess now the city says it's his home."

For others looking for a home in the area, Kelly, a manager at one of the complexes in the neighborhood who did not want to provide her last name, said the pile of trash is extremely frustrating.

"It becomes a problem with my tenants that are already living here and also that are applying here," said Kelly. "No one wants to live with that."

They prioritize clean-up efforts for campsites that don't follow COVID-19 safety guidelines or have needles near schools or playgrounds. The site in East Portland may be small according to city standards, but neighbors consider it a big and growing problem. They would clean it up themselves but fear the camper's reaction. Desperate for a solution, they're eager to assist the city in getting rid of the pile of trash.

"I'm willing to volunteer to help," said Skuse.  "If they want to come to clean this out, I will be out here with them."