'It definitely is a crushing blow': Downtown Portland business owners clean up after another riot

Pinkham Millinery, a decades-old and world-renowned designer hat business, was one of several businesses that had its windows smashed overnight. 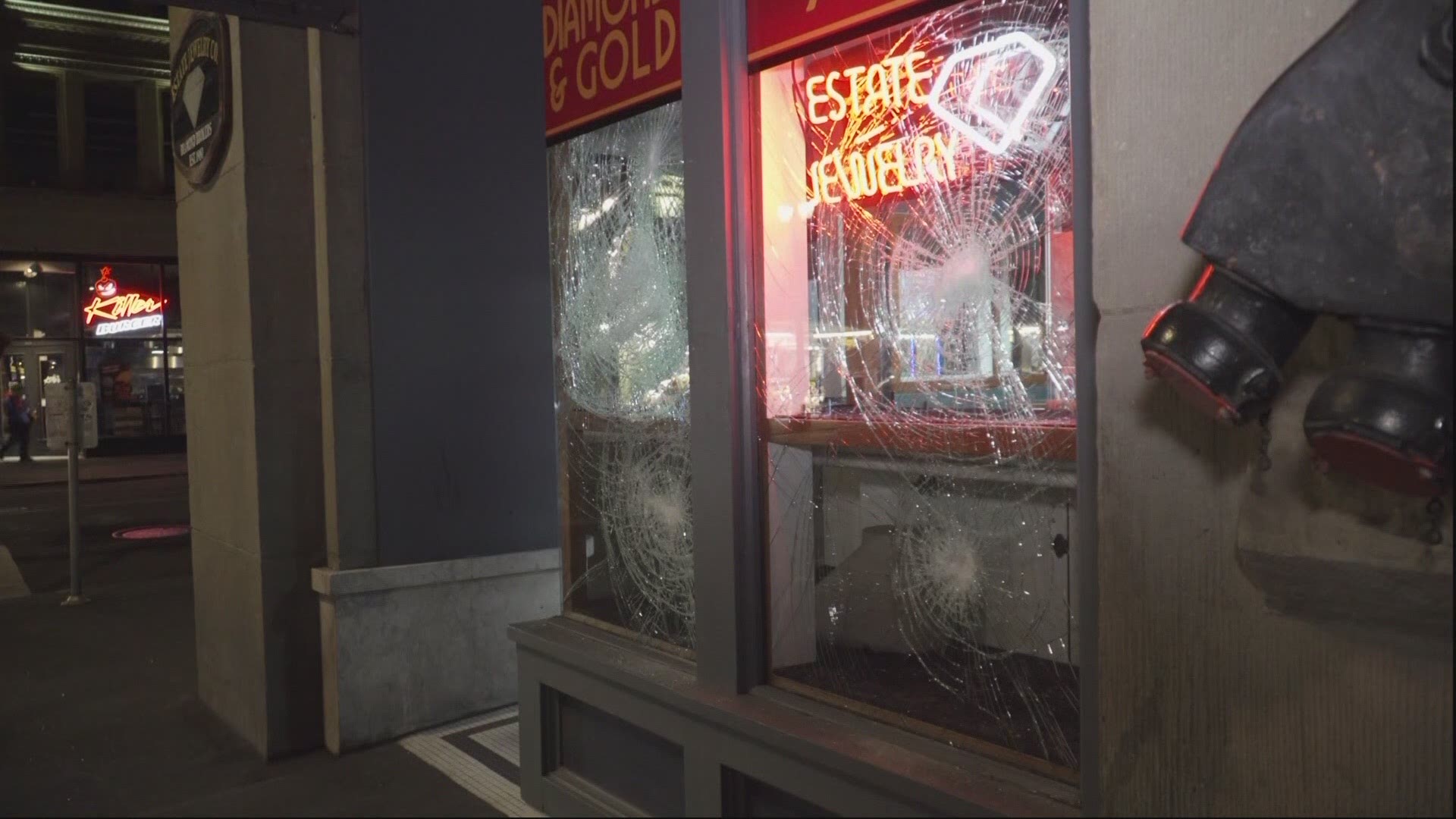 PORTLAND, Ore. — Some Portland business were stuck repairing windows and dealing with graffiti Wednesday after yet another riot in downtown Portland.

It came on the one-year anniversary of George Floyd's murder and followed a separate peaceful march in his honor.

There's not much difference between video of Tuesday night's riot and shots from downtown riots this time last year.

A crowd of about 200 demonstrators dressed in black gathered outside the Justice Center around 8 p.m. Protesters in "black bloc" are seeking to abolish police.

Some spray-painted the building and set off fireworks. They lit a dumpster on fire and pushed it close to the Justice Center. Police said some in the crowd threw bottles, eggs and metal spikes at officers.

Just before 10 p.m. the crowd marched to Portland City Hall and broke windows. Police declared a riot and ordered people to leave or risk arrest if they continued to engage in criminal activity.

Then, the crowd marched through downtown, breaking windows at multiple businesses – both big and small.

"It's not a simple glass repair because the treatment they used back then cannot be used today," Pinkham Millinery owner Dayna Pinkham said. "There’s going to be some construction involved so I’m not sure [how long we'll be closed]."

Demonstrators broke the door at TAH Bags and Adorn boutique, right next door to Pinkham. They just had their window shattered about a week prior, TAH Bags owner Angelina Walker said.

"We're going to have to close the store again. I think closing the store is a huge loss," Walker added.

This comes on top of construction, a pandemic and a slew of other issues downtown that have battered business over the past year.

"I'm already worried I'd even make it through this year and this definitely sets me back quite a bit," Pinkham said. "I'm mentally preparing for that possibility of having to close."

"It's disheartening. It definitely is, like, a crushing blow when you're already struggling," Pinkham said.

"Yeah, it's hard. Especially because things were starting to turn around a little bit a month ago," Walker added. "So it's another setback and folks already don't want to come downtown."

Police did warn them about the planned event – and they prepared. They're disappointed but not surprised.

"I definitely have been wondering why I haven't gotten hit so far. I feel fortunate to have staved it off this long," Pinkham said.

While Pinkham and Walker support protests, they don't support damage and destruction. They don't believe the riots and chaos have anything to do with the protests for Black lives.

"It just seems like it's too easy to cause destruction and just walk away," Walker said.

"That's what I don't understand. Why they would hurt a small business owner?" Pinkham added.

Both women are trying to stay optimistic about their futures and hope security cameras caught whoever did this.

Meanwhile, police arrested five people Tuesday night. All were at least charged with criminal mischief and one was charged with arson.