Blumenauer Bridge installment over I-84 delayed

PBOT had planned for the bridge to be put into place earlier this summer, but complications between various transportation agencies resulted in a postponement. 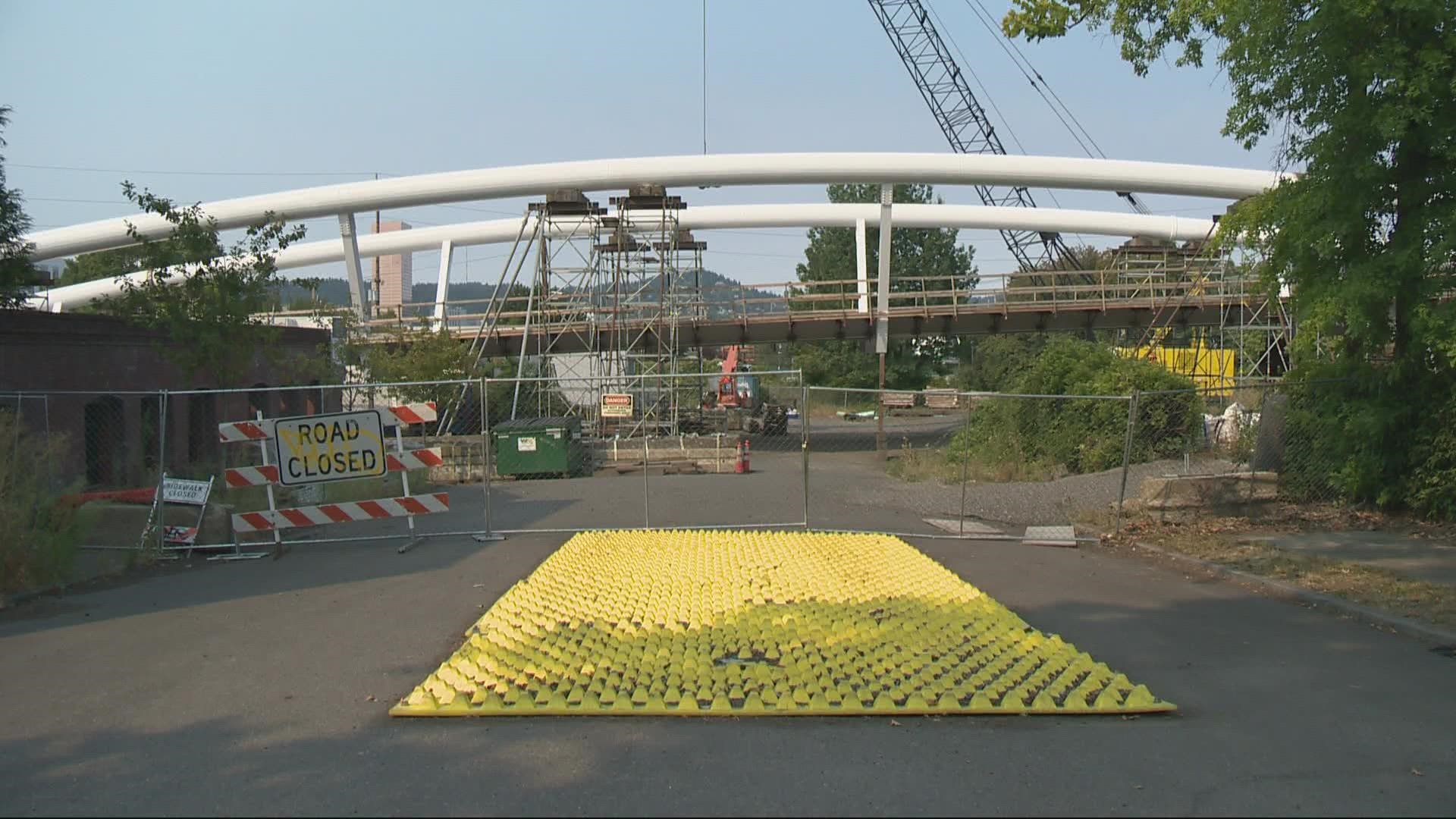 PORTLAND, Oregon — The installment of the Earl Blumenauer Bridge along Interstate 84 through the Lloyd District has been postponed until next year. The Portland Bureau of Transportation (PBOT) had planned for the bridge to be put into place earlier this summer, but complications between various transportation agencies resulted in the postponement.

The installation of the bridge would require both I-84 and Union Pacific Railway to be closed for an extended period of time, likely over a weekend, according to PBOT. The bureau coordinating closures and construction with the Oregon Department of Transportation (ODOT) and Pacific Union Railway was one of the main factors in postponing the installation of the bridge. PBOT is now working with the other two agencies to find a mutually feasible timeline for construction.

“We have a bridge that’s over 500 feet long that we’re trying to install over a major freeway and a major freight rail line in a very densely packed urban area,” said PBOT Spokesperson Dylan Rivera. “We need to account for the safety of anyone travelling along those facilities.”

Once the bridge is lifted into place, the project would still require some additional months of construction before it would be ready to open to the public. PBOT is currently projecting the bridge to be open and ready for public use in 2022.

The opening of the Blumenauer Bridge has the potential to change the landscape of cycling infrastructure on Portland’s eastside. The bridge would offer a connection between the Lloyd District and the Central Eastside, providing a safe outlet of transportation between Northeast and Southeast Portland for cyclists.

“This is important because it’ll create a connection between Northeast and Southeast Portland that doesn’t currently exist,” said Keith Jones, the director of Friends of the Green Loop. “Right now you have to go over 12th, Grand, or MLK, and none of those are really great to travel across if you’re a pedestrian or on a bike.”

The Blumenauer Bridge is part of a much larger master plan called the Green Loop — a six-mile bikeway that would connect the central city on both sides of the Willamette River. Friends of the Green Loop is a nonprofit organization that advocates for the development of the project. Although the Green Loop is still a work in progress, Jones is hoping that the opening of the bridge will give the opportunity for the public to see the project’s potential.

Credit: Friends of the Green Loop

Credit: Friends of the Green Loop

“The Green Loop is still a long way from being fully realized, and my group is trying to advance that as much as possible,” said Jones. “Having this in place will be important because it will help you ride the route and see what is possible.”

Additionally, the Blumenauer Bridge is designed to be an earthquake-safe bridge and would provide the city with an emergency conduit across I-84. The structure is designed to be strong enough to withstand a large-scale earthquake and measures at 24-feet wide, which would be wide enough for emergency vehicles to use as a path over the highway.

“As we're building new infrastructure in recent years, it’s important to us to make sure that it’s seismically resilient so that we can provide lifelines for the community in the case of a major earthquake,” said Rivera.

Until the bridge opens, cyclists in the area will have to continue to use 12th Avenue, Grand Avenue, and Martin Luther King, Jr. Boulevard as pathways for traversing over I-84. More information and updates on the Green Loop can be found here.

RELATED: Yes, 45,000 bridges in the US are in poor condition